Things are really getting a bit grim for Billy. First, he’s having to save people from a zombie horde and now he has to help a young boy and his sister avoid a load of man-eating rats and an Inquisition army. Why couldn’t they all just get along? Oh well, time for him to delve into this one and see what’s happening.

I have had my fair share of strange games in the past. I have to say though, that this one is up there for what it contains. “A Plague Tale: Innocence” has some of the most mental moments I’ve ever seen on a digital level. As this is the intro, I’ m not really going to go into it just yet, but there is a strange vibe about the whole thing. Let me get properly into the tale of rats, inquisitors and two children with a strange story to tell.

The story of A Plague Tale is nothing short of mental, with a hint of sincerity. Amicia and Hugo De Rune are a brother and sister who see their family and friends decimated in a vicious attack by The Inquisition, with the big knight, Sir Nicholas heading the physical part of the religious army.

To this point, it sounds all normal and predictable. Oh, did I mention the carnivore rats that infest the place? You uncover these around chapter 3, but at the start you are introduced to Amicia, a teenage daughter who is born into noble blood, along with her brother, Hugo. He has an illness that has been with him since birth, and his mother has been taking care of him throughout his young life.

Tragic events lead to both parents being killed and it is left to the two siblings to fend for themselves, as they try to not only stay away from the dreaded Inquisition, but also those hungry rats and keeping them at bay. Throughout the journey you meet some people who are having a tough time as well and together, you act as a team to stop the evil plaguing the French district. 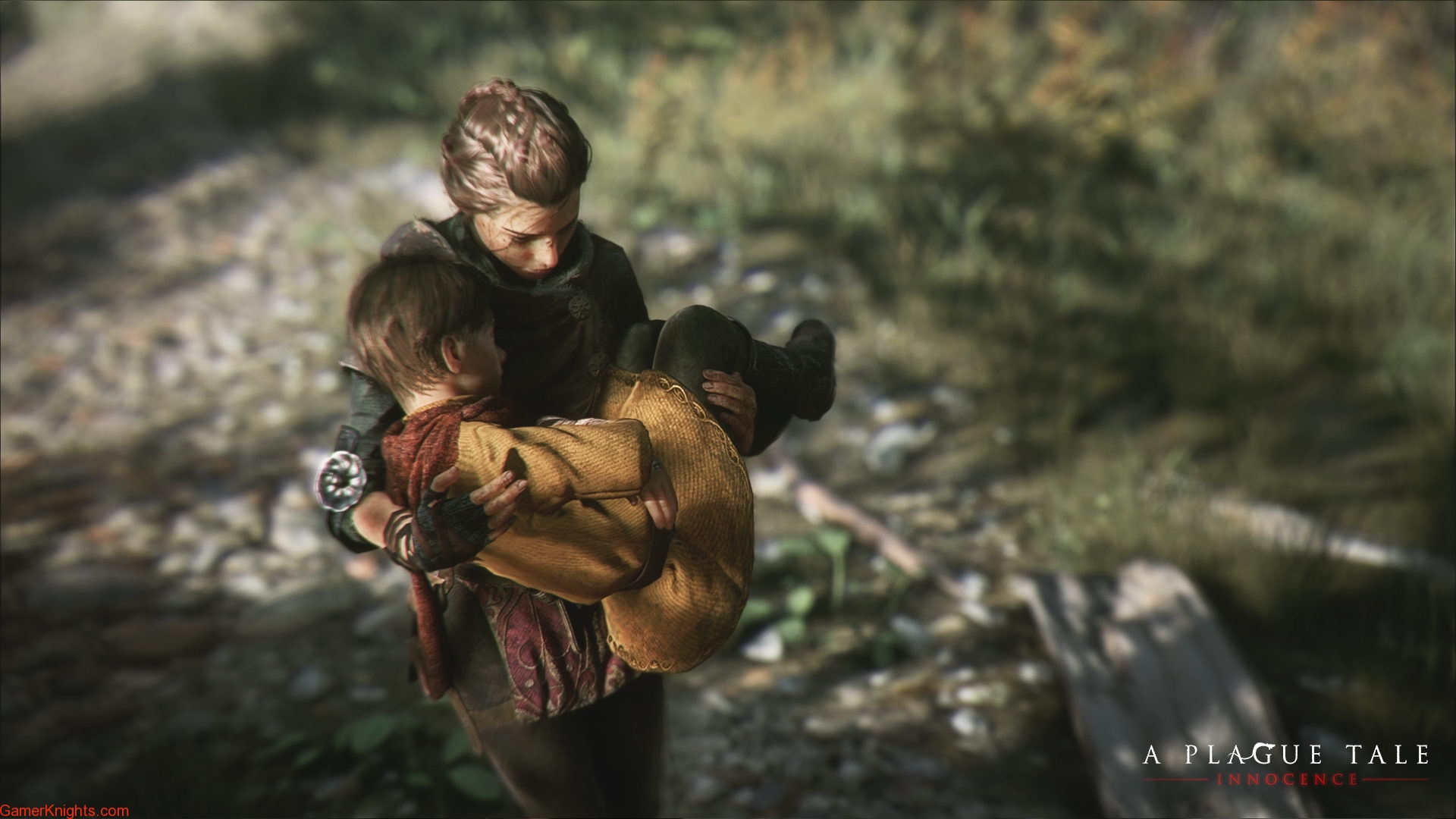 From the start with this game it is all about stealth. It tries to give you the impression of being an open world, but it is anything but. You almost feel like you’re playing an on-rails shooter, as you are guided, albeit gently, towards your inevitable ending. It is a bit of a sad thing, really, as if this had been more open it could have had more to it, in terms of side missions and such. It does feel like there is only one thing to do and nothing more. A Plague Tale is split into two main styles.

You have your stealth based sections, much akin to Metal Gear and Splinter Cell, the other parts are stuck in puzzles, using light sources and teamwork to create a lit area to safely get past. For the most part the mixture isn’t too bad, but there is one section near the end which just involves Hugo that does go on for a little too long, but it can’t get it right ALL the time. 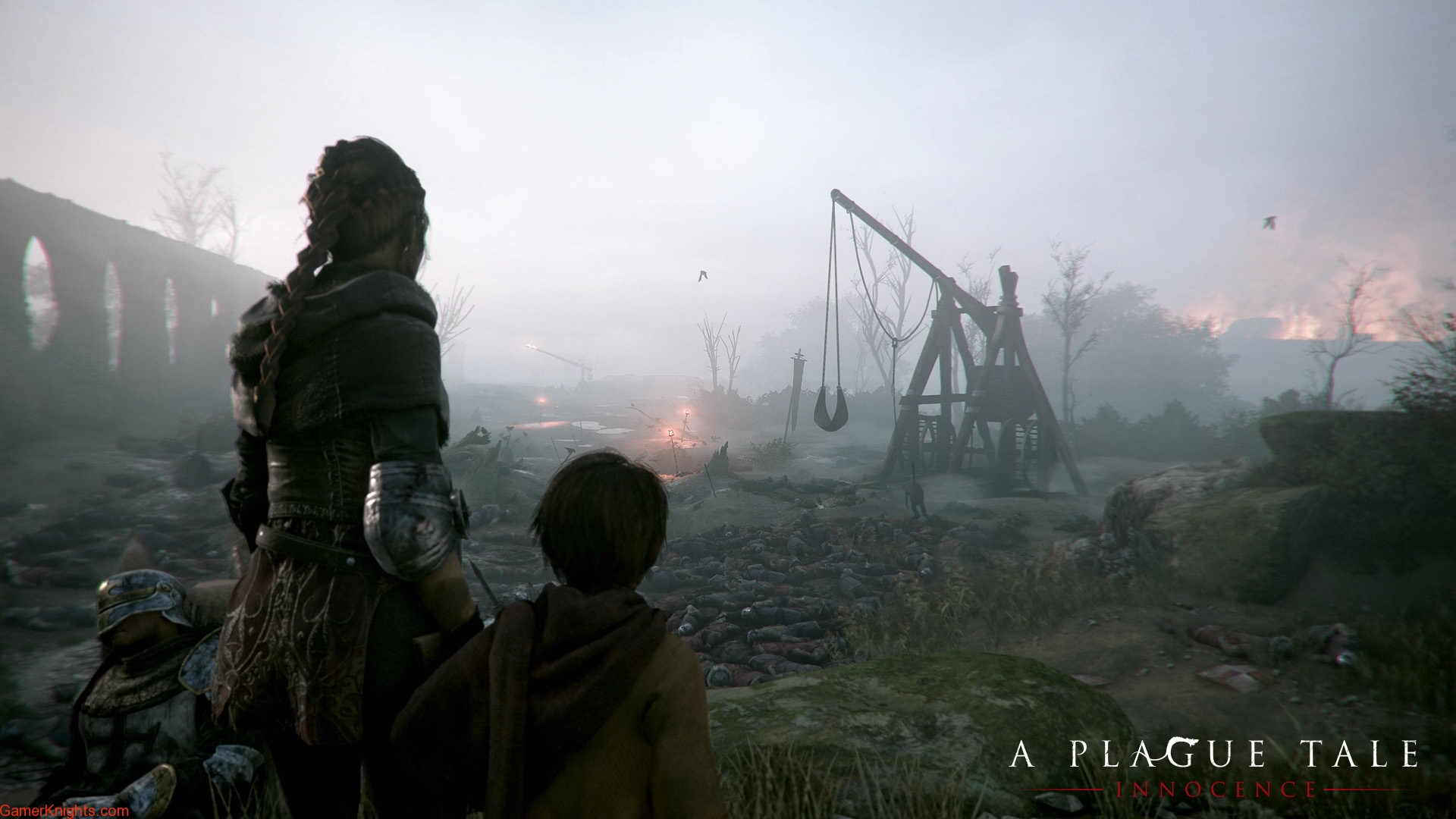 That is all there is to it. The first four or five chapters are almost like extended tutorials, which are very easy to navigate. As you progress, you are given new and ingenious ways to keep rats away, as well as attract them to the guys you’re trying to get past. On a personal level, I feel that this is a little too late in appearance, but at least it does happen. A finer balance would have made this just that little bit better.

It looks amazing, there is no denying that. I was not expecting much when I saw it was involving Focus Interactive, who usually take care of Farming Simulator, which isn’t exactly the greatest for ground-breaking visuals, but this surprised me. I like how it goes from a beautiful forest or village one minute and then heads straight into a grim place, full of corpses and death. It also gets the award for most amount of dead pigs in a level, as it totally surprised me. 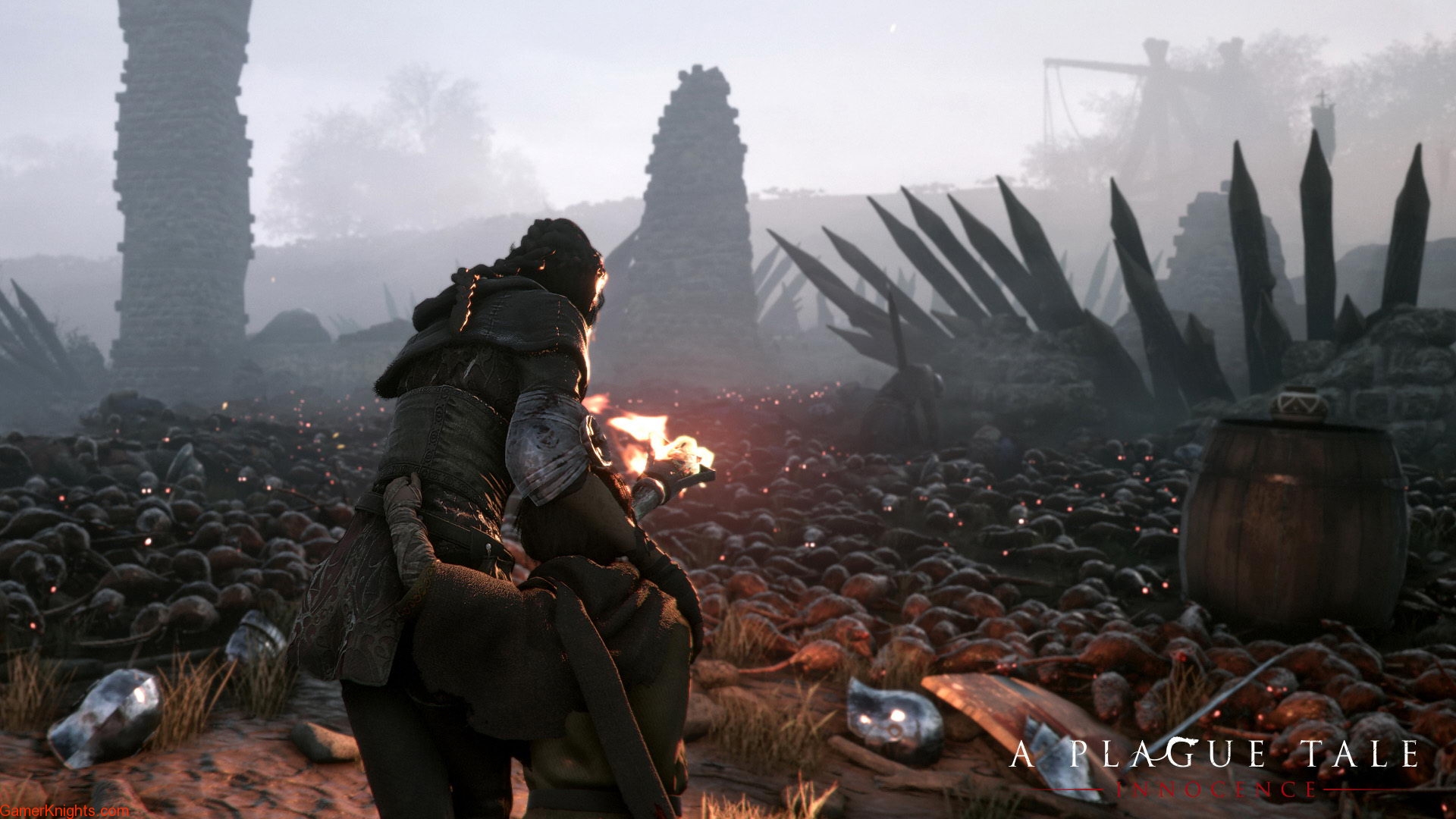 The score is really great also. It manages to bring a lot of atmosphere by only using a few strings and the occasional percussion point. I would also suggest trying not to die too many times, as the shriek of music that goes with it can certainly put the fear up you. I say this from experience.

What we have here are fifteen chapters of interesting narrative. The story and vocal work are very impressive and you will keep going to ensure that the end is done, as you get immersed into it. The final battle does leave a lot for the imagination, but as you go through the story it just gets more and more sill and mad. You have to accept that when dealing with religion and a whole population of crazy, man-eating rodents.

As much as the story is intriguing, there are some bits that could be improved on. The puzzles are a little too easy and I finished the whole thing without any relative headaches, other than the one from being up til 6 in the morning playing it. It needs some harder brain working puzzles to keep you thinking. The stealth options are a little too easy as well and you become incredibly overpowered towards the end, especially if you are upgrading your sling as you go.

If you strip the story away you are left with a pretty average stealth puzzler. It is a good job then that the story is such a powerful one. It does help to gel the whole thing together, but I would say if another game from this company is made, they need to try and make the main mechanics a little tighter and spread the goodness out across the entire thing.

Other than that, A Plague Tale: Innocence is a most impressive game and I am pleased I got to go through it.