Much like the ever-taut cable of our robotic protagonist, Chibi-Robo Zip Lash is a tight game that feels right at home on the 3DS.

Zip to the Finish:

Chibi-Robo Zip Lash is a 2D platformer in much the same vein as Nintendo’s recent Kirby and Yoshi games. It’s full-to-bursting with cuteness, and has some neat ideas up its sleeves that differentiate itself from Nintendo’s other properties. That being said, this budget title can feel like a bit of a one trick robo before the ten hour campaign is up.

Aliens are grabbing our stuff, and it’s up to Chibi-Robo to stop them from doing so. This is essentially what the story in Zip Lash boils down to, and whilst it’s not going to win any awards for the depth of its narrative I’m not sure it ever needed to. The simple set up gives Chibi-Robo enough motivation to zip his way through the variety of levels. Occasionally we’re reminded about the alien threat, as we see them guffawing in the background of the stage. Sometimes we’re even tasked with rescuing alien children and returning them to their parental UFOs (a task I consistently sucked at as I threw the kids off screen towards their inevitable doom. I’m sorry, alien baby.)

Despite the lack of story there’s a lot of character here thanks to the great animations, writing, and nonsensical chirps, squawks and beeps of enemy and ally alike. Whilst the side characters that populate our missions are usually funny and cute, Toby – a living toy plane that loves confectionary and snacks – really creeped me out. He was a bug-eyed weirdo and I didn’t like him.

Zip Lash is a 2.5D platformer that has one neat trick and sticks to it. As you progress through each stage – classically Nintendo-designed sidescrollers that hide their fair share of secrets – you can throw Chibi-Robo’s power chord to attack enemies or attach to ledges in the world. The latter allows you vertical traversal that Chibi-Robo’s modest jump wouldn’t otherwise permit. You can also use the Zip Lash to ricochet off walls, destroy large groups of enemies or press numerous buttons and switches. 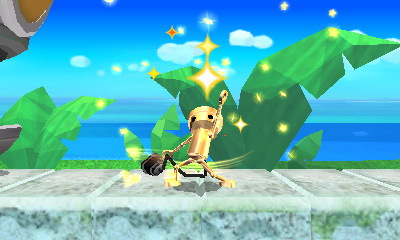 Nintendo are stars at iterating upon ideas, evolving and tweaking mechanics in ways you wouldn’t have thought possible when you initially started your adventure. There’s a promise of that here with the Zip Lash function but it’s a promise that goes mostly unfulfilled. The Zip Lash is fun and there are plenty of satisfying moments where the game allows you to wreak total havoc with one well-placed lash, but I can’t help but think that there was a lot of untapped potential wasted here.

There’s a load of stage goals to achieve (such as not dying, using items or taking damage) and a bevy of collectibles to hunt down and tick off your checklist – and these were always fun to find. The stage design is simple but smart, hiding its fun little diversions just off the beaten track. This slew of medals to collect and challenges to chase give Zip Lash a great replayability and sense of achievement, and when paired with the title’s budget asking price the value here is very satisfying. 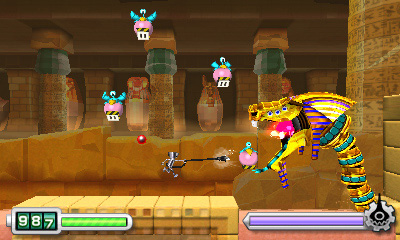 What isn’t so satisfying is that whilst you’re on the hunt for collectibles and working towards your 100% game file, Zip Lash introduces a unique – and strange – progression system. Instead of beating level one and carrying on to level two, you spin a wheel and move around the stage map depending on what number the wheel lands on. Treating the title like a non-linear board game was neat at first, but when I wanted to revisit worlds to collect a missing medal or simply move on to the last level on a map I had yet to play, the novelty wore off. You can game the system and spend money to make your chances at landing on your desired square higher, but to add a random factor into selecting your level seems like an obvious misstep, and forcing someone to replay a level they didn’t want to seems like an even more obvious no-no.

Chibi-Robo – both the titular character and the game itself – is adorable. Its animations infuse the little robot with lashings of cute personality and do a lot to give the game a really personable feel. Elsewhere the game is equally as wonderfully designed, with colourful and simple backdrops and levels smartly leading the eye to hidden collectibles. The 3D feature is expertly implemented here, intelligently focused on depth rather than pop-out visuals. 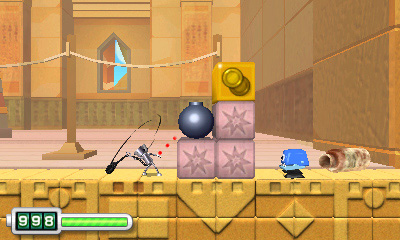 As to be expected from a Nintendo game, the music is instantly winning. It’s a charming score that is punctuated by the beeps and boops of various enemies, mechanisms and occasionally Chibi-Robo himself. The whole thing comes together for an endearing auditory experience that won me over immediately.

Chibi-Robo Zip Lash isn’t going to blow you away, especially if you’re a seasoned platformer. Aside from usual genre fare the game has one unique mechanic going for it – the titular Zip Lash – and whilst it’s fun to play around with and adds a bit of much needed variety to its many stages, Chibi-Robo still feels tired before its end. It is, however, a fun game to pick up and play through – especially for younger audiences.

At its modest asking price, Zip Lash is definitely worth a go, just to see if its off-beat humour, charming characters and collectible-ridden gameplay are for you.