Darksiders continues to shake things up between sequels, with Genesis' viewpoint taking to the skies to find new angles for this ever-interesting series.

Darksiders Genesis is not a Diablo clone. I just thought I’d get that out there early, considering how easy it might be to mistake this new entry into THQ Nordic’s hellish brawler franchise. Despite taking to the skies for a new, isometric viewpoint, this is not the looting dungeon crawler the familiar camera angle would have you believe.  That doesn’t mean its not a devilishly good time, however.

I’ve played, completed and enjoyed all of the Darksiders games up until this point, but even with that information their convuluted narrative that hops between timelines seemingly at will still doesn’t make much sense to me. 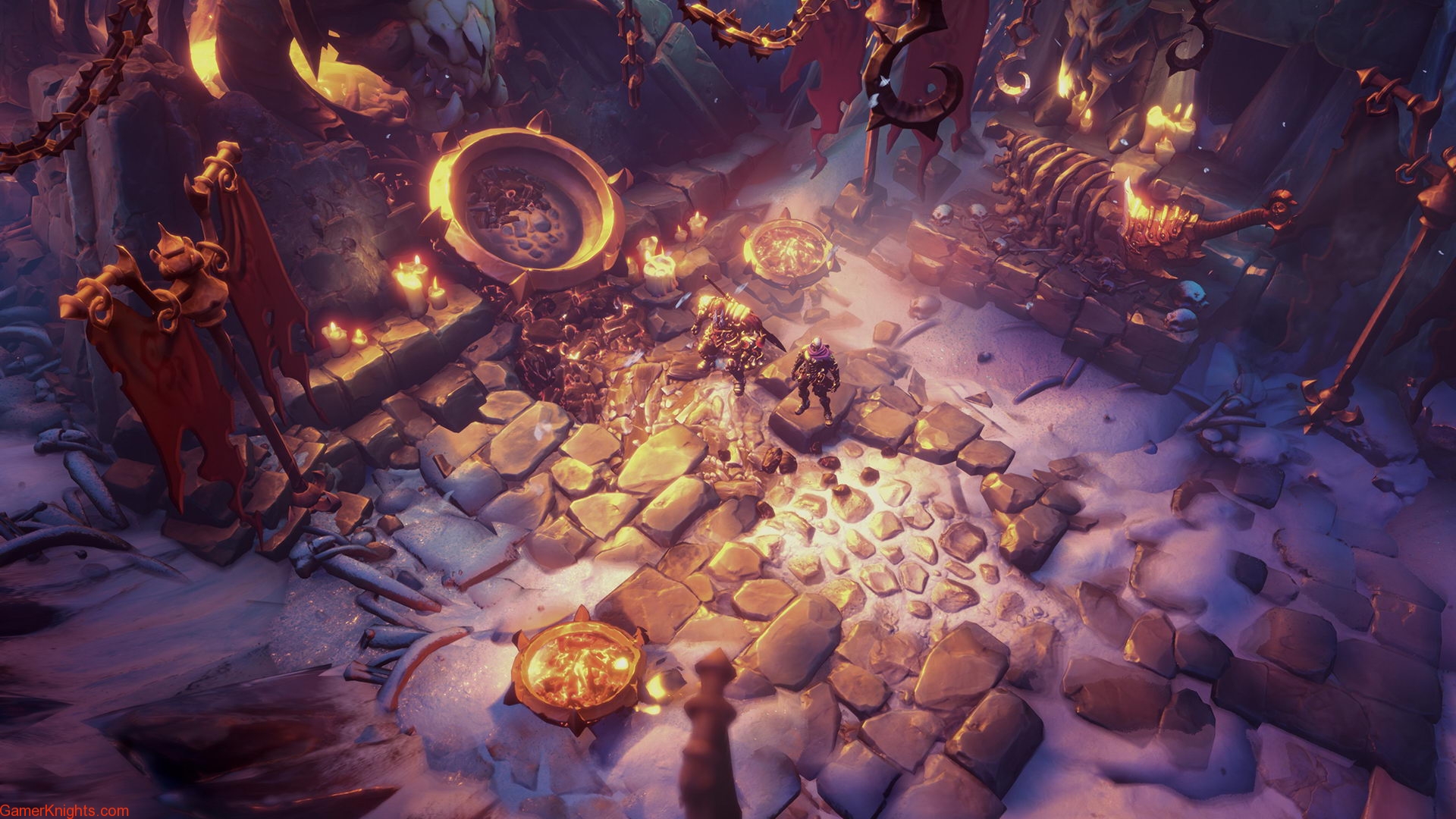 Genesis takes place before that palava, straightening things out somewhat and giving a reason for our old friend War to be palling around before he got in all that trouble with the Council. Alongside him is Strife, the fourth horseman of the apocalypse and the last to get a game of his own… except this isn’t really his game, co-op focused as it is. Still, despite Strife getting short changed on a sequel all his own, he and War set out to find out what the demon king Lucifer is up to.

Honestly, as a co-op experience set far enough in the rear view that it should free up most of the main players of the series, it’s curious that Genesis doesn’t feature all four Horseman as playable characters – or even four player co-op. Indeed, it’s only fit for two, and we’re locked into playing as the brooding War or the far less serious Strife. It’s great to be able to play as War again though, and he feels comfortingly familiar despite the change in viewpoint.

That change doesn’t actually shake things up too much when it comes to how a Darksiders game plays out: each Horseman has a set of skills and abilities that will help them dispatch their foes and also engage in some puzzle solving and platforming. Solo players can switch between the two at will to access whatever arsenal each situation calls for, and it doesn’t feel like too much of a concession without a buddy there with you. Playing two player clearly is the way things were intended to go down, however. 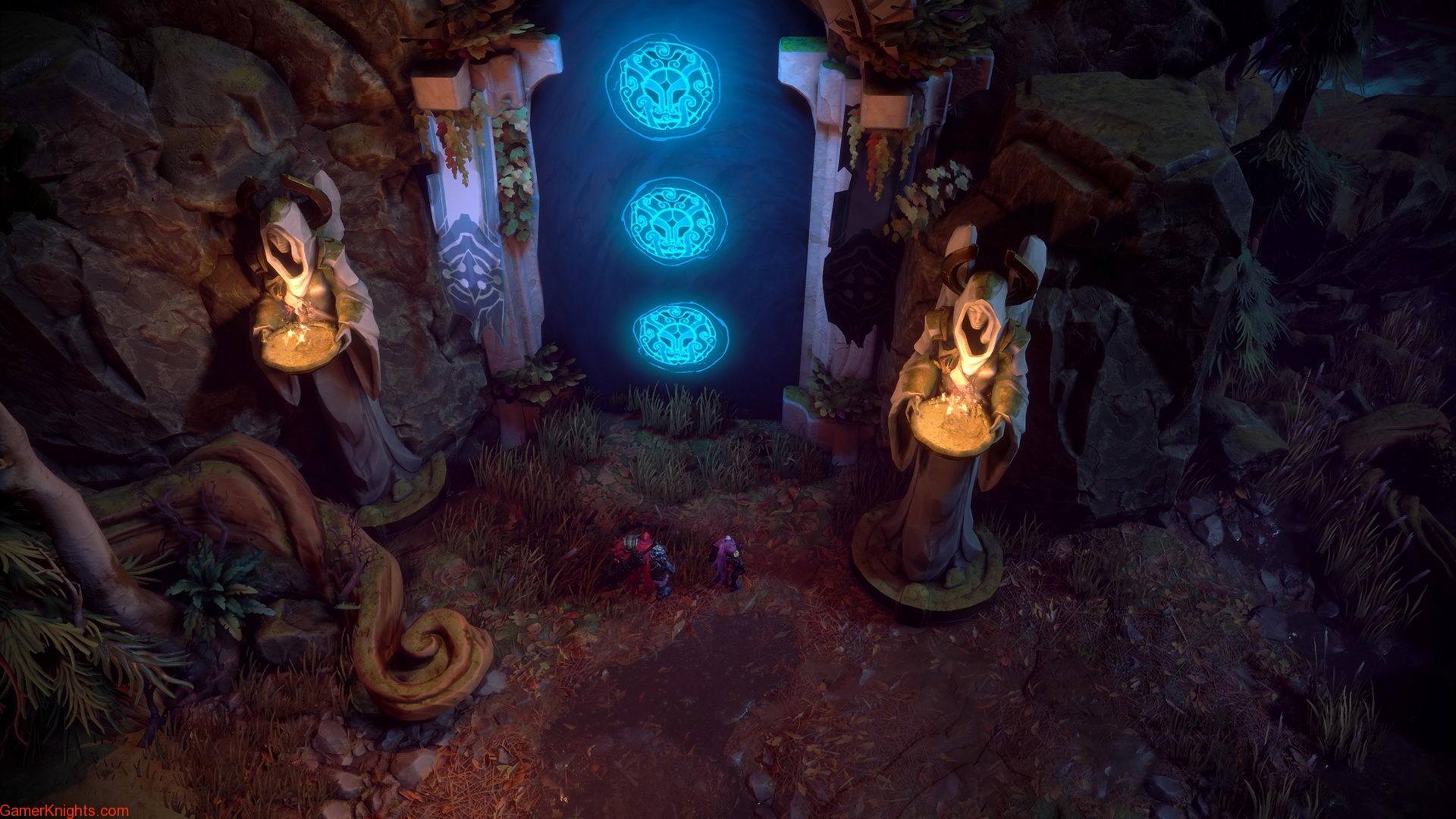 I enjoyed blasting through the campaign with my partner, and whilst initially there seems to be far too many things to access via far too few buttons, the control scheme eventually locked into place for us. The skill wheels seem out of place and clunky throughout, however, and I wish these actions were context sensitive rather than something you’ve constantly got to switch between.

The brawls are fun enough, and challenging even on standard difficulties. It’s another reason to have a buddy at your back rather than an AI companion. They felt fluid and fun, and didn’t suffer by being slightly more simplified than their mainline brethren.

I loved the look and sound of Genesis. That chunky, deliberate comic book art has carried over beautifully throughout the series, and whilst they might have dropped the official collaboration with Joe Mad, his style can still be felt all these sequels later. The world is a fun one to crash through thanks to how varied and, at times, beautiful its art style can be.

The soundtrack is traditional Darksiders fair, a metal/rock hybrid that accentuates the games action whilst a more wistful vein comes across during extended moments of exploration. Combat sounds chunky and the voice acting is especially good, with a fun back and forth between the brothers.

Darksiders Genesis is a strong outting for a series that’s been around for a decade now (wow I feel old). By switching things up Airship have breathed new life into a series that was threatening to stagnate. I hope that when Darksiders 4 eventually rolls around we’ll see Strife get the spotlight he so deserves, but Genesis acts as a good teaser for his debut proper. It’s a shame that you can’t pick other Horsemen for this game, but aside from some curious design decisions this is a really strong title, especially brilliant for anyone looking to play through with a buddy.