Etrian Odyssey 2 Untold provides a great point of entry into a somewhat old-school series, without sacrificing any of its hardcore charms.

The Etrian Odyssey series is one of the most purpose-built franchises I’ve delved into. It’s laser focused on an incredibly specific gaming niche, a hardcore hybrid of dungeoneering and cartography that caters to its fanbase with some seriously stellar sequels time and time again. The Untold offshoot – a set of remakes on the 3DS that add additional stories and features – seeks to open that niche up to the rest of us, with surprising success.

Etrian Odyssey is a no frills sort of experience – at least, it is usually. Once it’s got its players acquainted with its straightforward mechanics it trusts its own addictive nature to carry them to the credits on their own. Untold 2: The Fafnir Knight adds in a heap of storytelling that was never present in the DS original and hopes this new direction hooks in a new crowd, and for the most part it really works.

Smartly, EO2U doesn’t force this change upon its players. Choosing from Classic or Story, players can tailor the game to their own interests. The diehards can opt for Classic and enjoy a faithful remake of Etrian Odyssey 2 with some sensible upgrades and updates. Newcomers, or for those who were always turned off by the series’ lack of narrative drive, can enjoy the all new Story mode.

This addition introduces a group of explorers who embark on a seemingly simple quest, only to be tasked with saving the world. It’s full of clichés and more than a couple of eye-roll moments, but that doesn’t matter too much. The cast are all likeable and the localization is funny and enjoyable, whilst the animated cutscenes and voice acting are a welcome addition to a series I always thought could do with a bit more character.

Story mode also gives the player a premade party with some interesting quirks. The dungeon crawling and character progression is mostly the same as classic mode, but the developer designed ensemble negates the need for character creation. This makes Story mode perfect for newcomers, and once they’ve found their footing they can tackle harder challenges in classic mode with even more customization. I really liked this almost introductory mode, and enjoyed it even as a series veteran. If you haven’t played an Etrian game before, this is where I’d start. 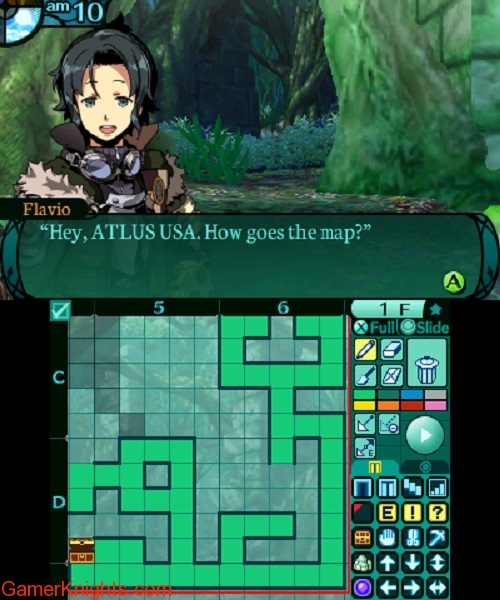 Elsewhere EO2U is by and large the same beast as it was before, only with more bells and whistles. You lead your party around a grid-based dungeon, engage in first person turn based fights and map the entire thing yourself using the 3DS’ touch screen. 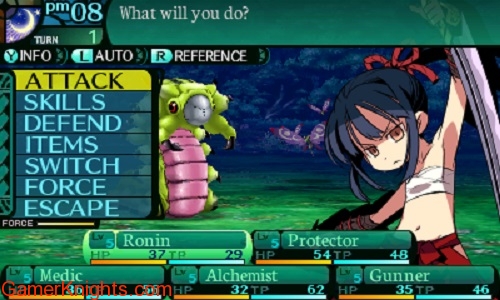 The cartography is a hugely addictive draw to the Etrian Odyssey series, and I’m thrilled to see the developer refuse to dumb it down going forwards with the series. Disinterested players can let the game map itself, but I really think this is in detriment to the title’s nerdy appeal. Charting a floor of the dungeon yourself is just as gratifying as felling a giant beasty, and an experience you should definitely try before you decide against it. Essentially it boils down to chronicling your own progress as you work your way around the varied dungeons, marking hazards, areas to potentially revisit and most importantly making sure you know the way to the nearest exit should your team run into any trouble.