There are times when we arrive at some special crossroads, such as the one here today, where the weight of the historical past comes to meet the modern present. As if in parallel, he then confronts himself with his now, and, as is customary in these cases, all sorts of questions and paradoxes begin to emerge. The conflict, for example, between emotional identification and sober mind seems like something inevitable, in an eternal struggle of heart and mind.

In this arena, Sirens warns us to watch out for the nostalgia factor as a deterrent to reality. They forget, of course, to sing to us that without invoking emotion all this recording, like the one here now, would cease to be valid at birth. Simply put, they would never see the light of day in station-title remakes like those of Shadow of the Colossus and Resident Evil 2 .

So what else can you do than tie yourself to the mast and, listening to the sweet call of previous experiences and memories, enjoy the new journey to the end, knowing that any losses along the way are taken for granted?

The data of this trip have to do again with a station-title, a Final Fantasy that was a milestone for the time it was released, back in 1997. This Final Fantasy VII Remake raises fundamental questions about the etymology of the word itself, “Remake”. Some cases want a remake to appear with absolute fidelity to the original, having only worn today’s technology to look modern while, in others, the technology can bring about a complete design restructuring to be presented to the public as a modern Resident Evil 2.

The remake of Final Fantasy VII is not a one-to-one transfer case, nor is it intended to transfer that game, as it is, simply to today’s technology. Where he wants to succeed, and to a great extent succeeds, is to retell the story, drawing inspiration from the content of the original and, expanding on it, to present a new title through a modern prism. In essence, that is, it is presented to us again. The director has given special weight to the -without- presentation of emblematic characters and scenes, keeping the final result unchanged, remaining faithful to the spirit and style of the original. This is a very delicate balance on a stretched rope, but Remake manages to accomplish it with complete success.

Respect for the original gives room to the additions that expand it to become the perfect harmony, thus composing a Final Fantasy that we had years to see. From start to finish, the remake is an incredible experience that keeps an inconceivably good rhythm, offering unique moments and emotions. From start to finish, except for the last hour, where Nomura forgot to pull. 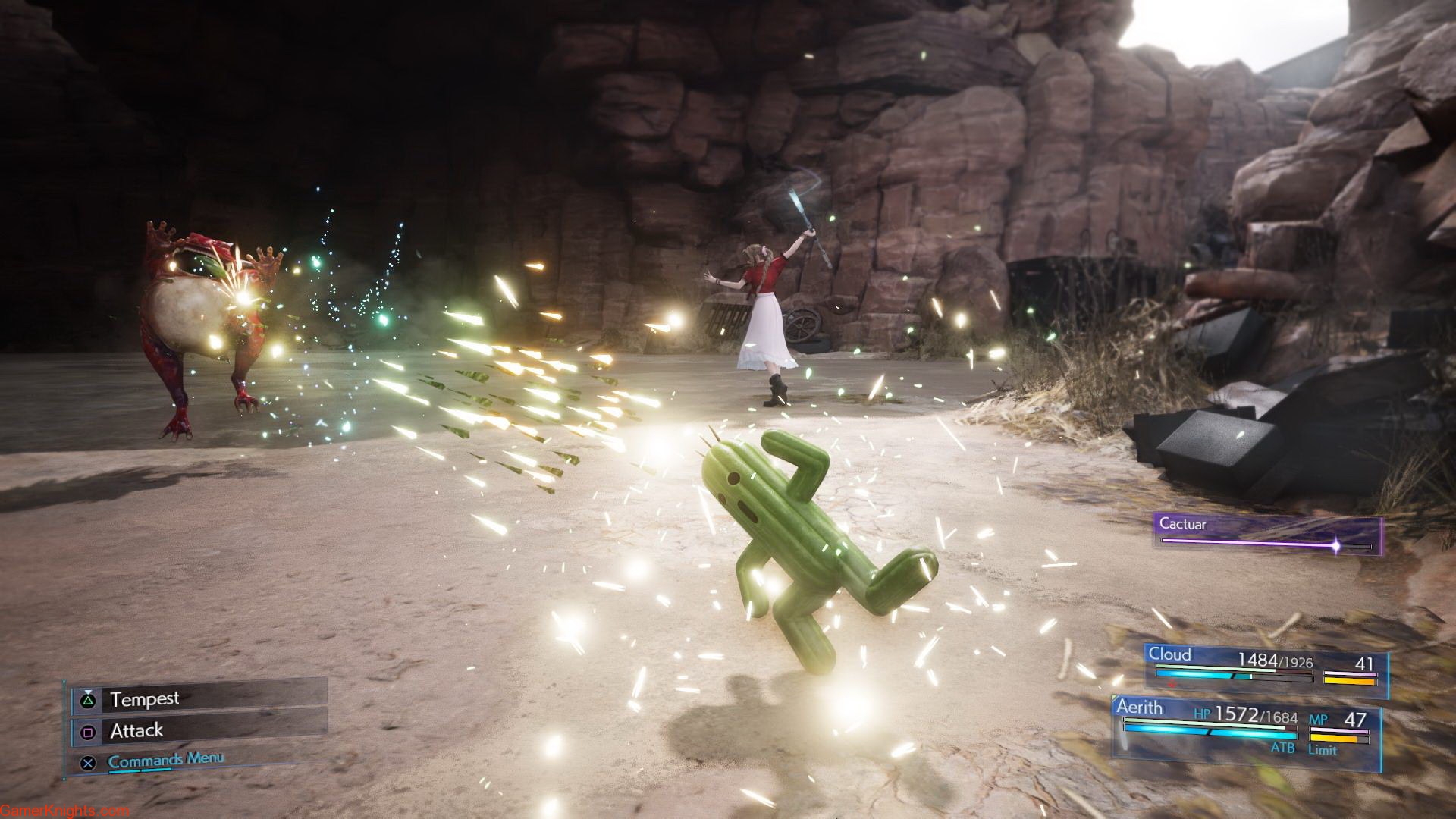 Since 2015, when it became known that the remake of Final Fantasy VII is being prepared, we learned for the first time that it will be episodic. The first attempt takes place exclusively in the dystopian metropolis of Midgar, a circular city whose inhabitants speak jokingly as a “pizza city”. The city is built on two levels, two huge “dishes”, where in the center of all dominate the headquarters of Shinra, the energy company that governs with an iron fist the fate of people within its walls. The upper plate includes all economic activities and is inhabited by the “privileged”, ie those with a financial surface, who are in fact well-to-do slaves. At the bottom of the plate are all the dreams of less “lucky” souls,where the illusion of freedom they enjoy keeps hope alive.

Symmetrically around the city, the chimneys of the mako factories, the energy that gives oxygen to the lungs of the city day and night, rise majestically in the sky. Both inhabitants rarely see the color of the sky. One has to stay on the outskirts, on the edge of the dishes, to be able to see what the moon looks like at night. It is a city that lives with its contradictions, its pluralism and its very clear class differences. Uninterrupted environmental pollution is the price for all the comforts that all residents enjoy, without exception, some less and some more. Until one night, the “terrorist” (according to the rulers) Avalanche organization is attempting something that will trigger a chain reaction of subversive events for the life of the entire metropolis.

The explosion of one of Mako Reactors, as a symbolic move against the exploitation of the planet’s resources, marks the beginning of an unprecedented adventure, where risks are constantly increasing and conflict with the established becomes inevitable. At the heart of it all is Cloud, a former Shinra special forces soldier and now a mercenary whose knowledge of how reactors work has been a good opportunity to earn a living in Avalanche’s plan. The city of Midgar is transformed into the ideal setting to unfold an adventure that barely lasted 4 to 5 hours in the original. With a duration of up to 40 and 50 hours, the remake retells this story, giving more emphasis and adding more detail.

Greater developmental time is given to existing themes that touched on the original, such as if the purpose sanctifies the means, the incalculable exploitation of the environment, the distortion of reality for the same benefit. The scattered npcs play a decisive role in the performance of the appropriate atmosphere, in a densely populated Midgar, where the dialogues between them very aptly color the pulse of the city. And the performance of the city itself, purely artistically, since technically it does not lack contradictions, is extremely impressive. The problems that arise have to do with the appearance of some low-resolution textures as well as with the use of finite number assets.

Don’t be surprised by the red cones you see almost everywhere, nor by the fact that twin npc’s sit on the same bench. These things happen. The level design clearly works as an aid to the story, having some design options that are now considered obsolete, but work in favor of the narrative and the excellent flow that the game has. In addition, the capture of the areas, especially those that appear at night, where the lighting works wonders in favor of the atmosphere, the result is extremely impressive. 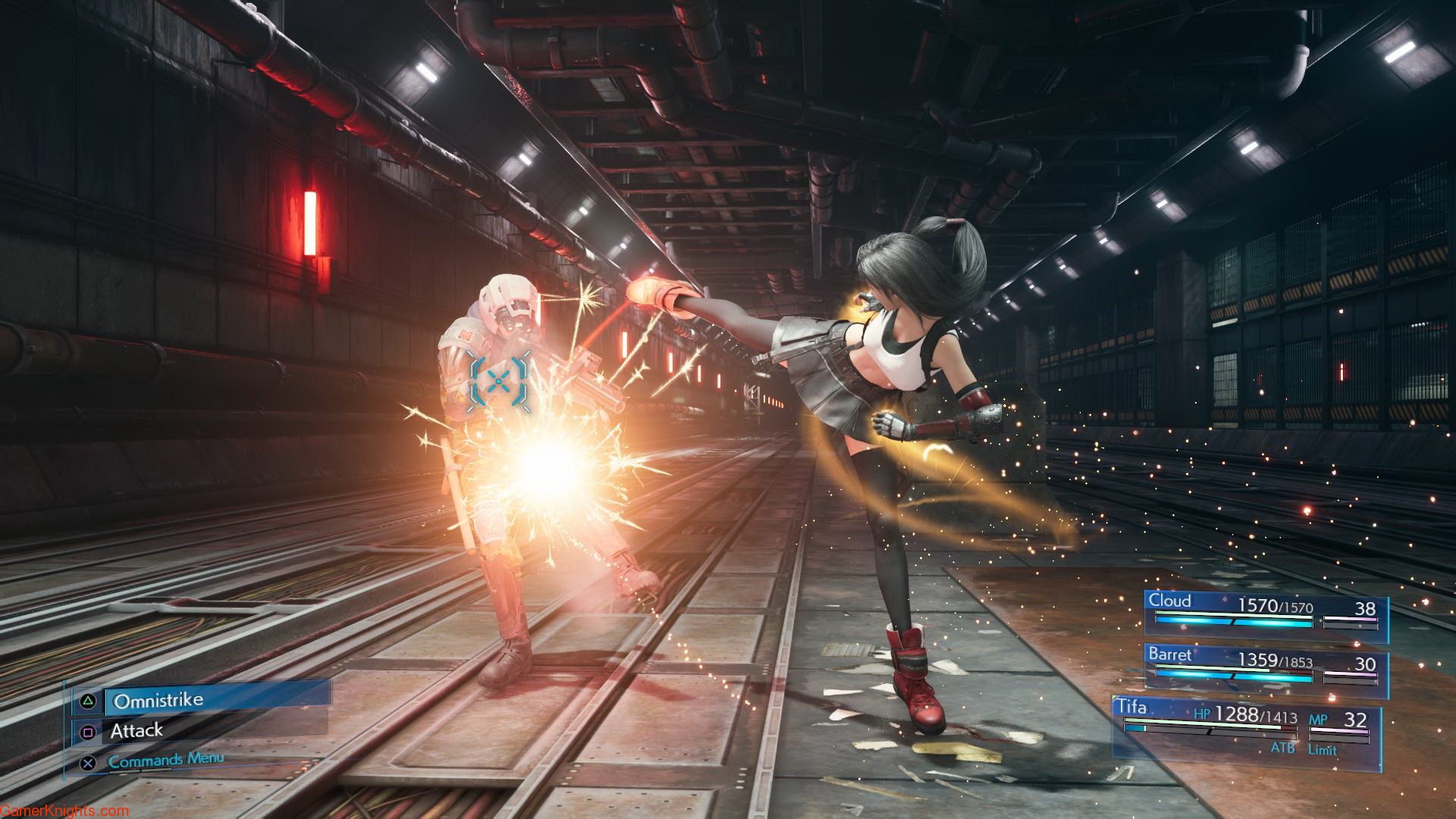 The plot of the story is presented through chapters, where in four of them we will find ourselves in the predefined hubs of the city. There the title slows down a bit, letting the player take a breath and take advantage of his time in side activities. In each of these chapters there are some sub-missions that usually have to do with the well-known wills we find in RPGs and they are a pleasant break in the player’s engagement with the game world apart from basic missions and stormy set pieces. Each of them is gradually evolving in various steps and, in total, they barely exceed twenty in number.

Typically, in the third chapter, where we get to the Slums, six missions are made available. In fact, an entire chapter, the fourth to be precise, which is a completely new addition, can be considered as a well-groomed side-quest, with the quest star appearance of a new antagonist being at least unnecessary if not comical. In other cases, such as in the Wall Market, the work that has been done is simply amazing.

In general, when the game is at its best, it is elusive. There are a few moments when the perfect change from cut-scenes to action, with the evocative background music and what’s happening on the screen, testify to the quality of production and the passion that overflows in their creation. The audio part of the title deserves special mention, with matching voice overs and excellent directing of dialogues, while the music ties in perfectly with what is happening on the screen. Especially when a boss fight makes its presence felt, the tension created by the music is inconceivable. Faithful to the original style, the game does not take itself seriously, thus ending up looking one-dimensional. There are moments with doses of successful humor, others completely strange and strange like the one at Honeybee Inn,while in the general darkness and gloom of dystopia, notes of optimism and positive messages emerge.

Of course, the new battle system in the overall picture also plays an equally important role. The truth is that fans of turn-based battle will find it dark, since the Classic mode that is supposed to simulate it does not work so well. Or, at least, it’s not what will replace the classic turn-based. The battle system was built to be played as a hybrid between action and menu commands. The key word here is “hybrid”. If one deals with the mentality of one or the other, it will be difficult to cope. 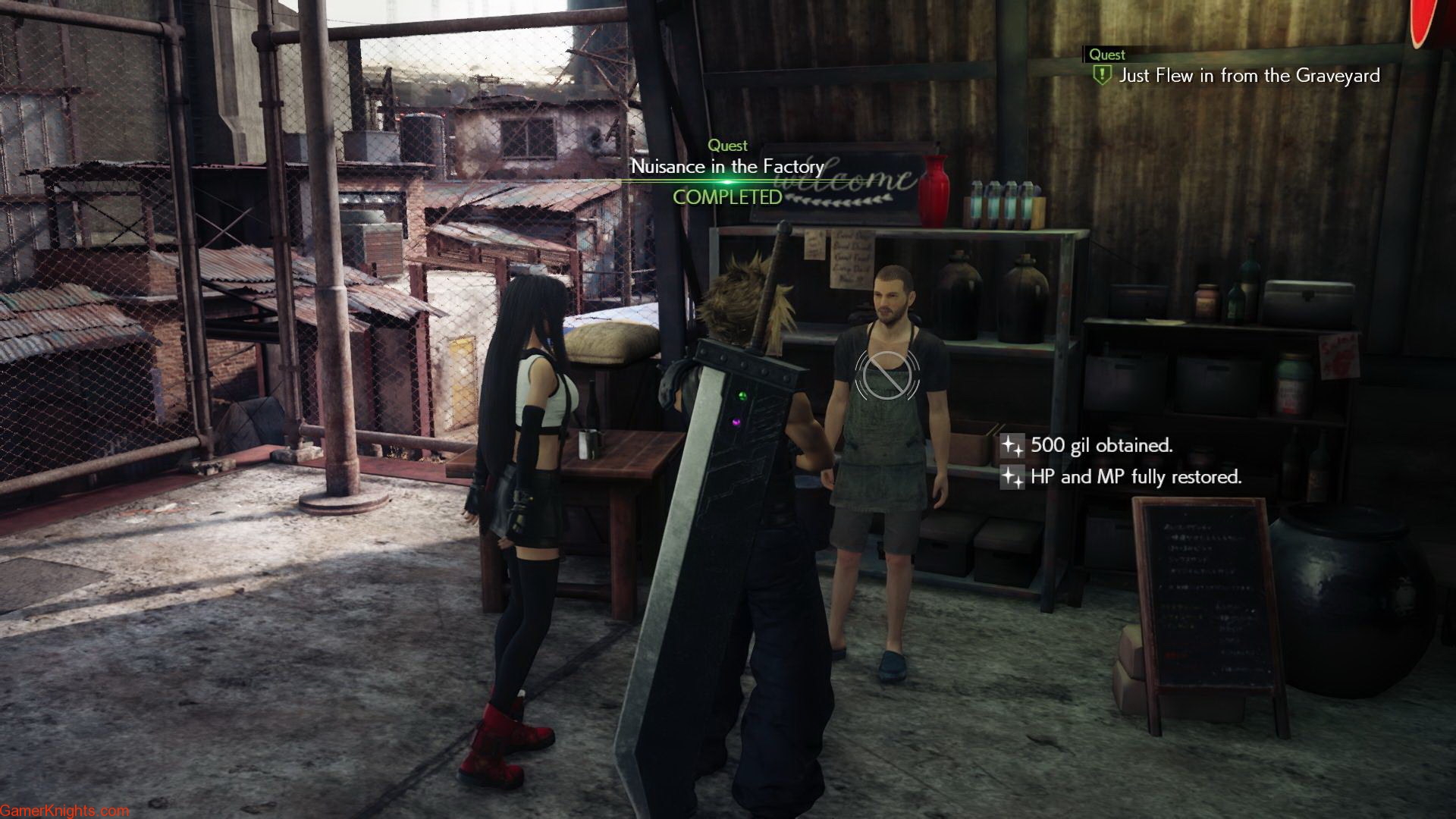 Even those who are accustomed to action-RPG titles with a group will need to adapt, since here we are not controlling a single character and let AI do its own thing. We have a group of three people and we have to handle all three of them, actively and alternately, since the equation includes factors such as the correct placement in space, defense and avoidance. Each character has its own ATB bar, which fills desperately late when we don’t control it, and every time it becomes available we can empty it by giving commands. Everything is defined by the ATB (active time battle) bar, from the use of skills and magic to the use of objects. By actively controlling a character and performing simple attacks, making defenses and avoids, the faster we have menu options available.

The rival AI always focuses on the character we control, so if we only play one, then it will constantly attack him. The mechanisms are thus set up where it essentially forces us to learn to play with all the characters, actively taking their role in the battle. For example, we can start a long-distance battle with Barret, get the opponent’s attention, and change to Tifaam, which does more damage when looking at the opponent’s back. At the same time, Barrett already has ATB available and, despite controlling Tifa, a simple push is enough to freeze the action and instruct Barrett to perform a Fire spell. In the strongest enemies, and especially in the matches with the Bosses, the player needs to read the moves prepared by the opponent,where he aims or what he generally intends to do, so that he can adjust his tactics accordingly.