Lab Zero break the mould with a charming, fun and frenetic RPG.

It feels like forever ago I was playing Indivisible’s early access demo. I remember being simultaneously wowed and worried by the frantic RPG action that felt like the videogame equivalent of spinning plates. But this was Lab Zero Games – the creators of the fantastic Skull Girls – and despite Indivisible only being their second title, I really ought to have known better than to be anxious. Indivisible is an absolute triumph, and a title that cements them as a serious force to be reckoned with on the indie scene.

Our lead is Ajna, a bubbly and energetic young woman whose happy-go-lucky streak of good fortune thankfully balances out her occasional absent-mindedness. Let’s not beat around the bush here, Ajna is a bit of a dummy. She lives in a peaceful village until – unsurprisingly – she doesn’t. It’s hard to live in a place that has been burned to the ground by a faceless empire of village-burning goons. Oh and her lovably gruff Dad gets murdered too, just for good measure.

Indivisible knows its a cliché, it leans into that cliché and riffs off of it to great effect. It’s one of the funniest games I’ve played in years, and I had a massive grin over my face during most cutscenes, if I wasn’t laughing out loud. Ajna has the power to absorb people – be they friends or frenemies – into some ethereal plane within her, and the fact that all of your ever-growing party set up digs inside of Ajna’s head makes for some fantastically funny set ups. 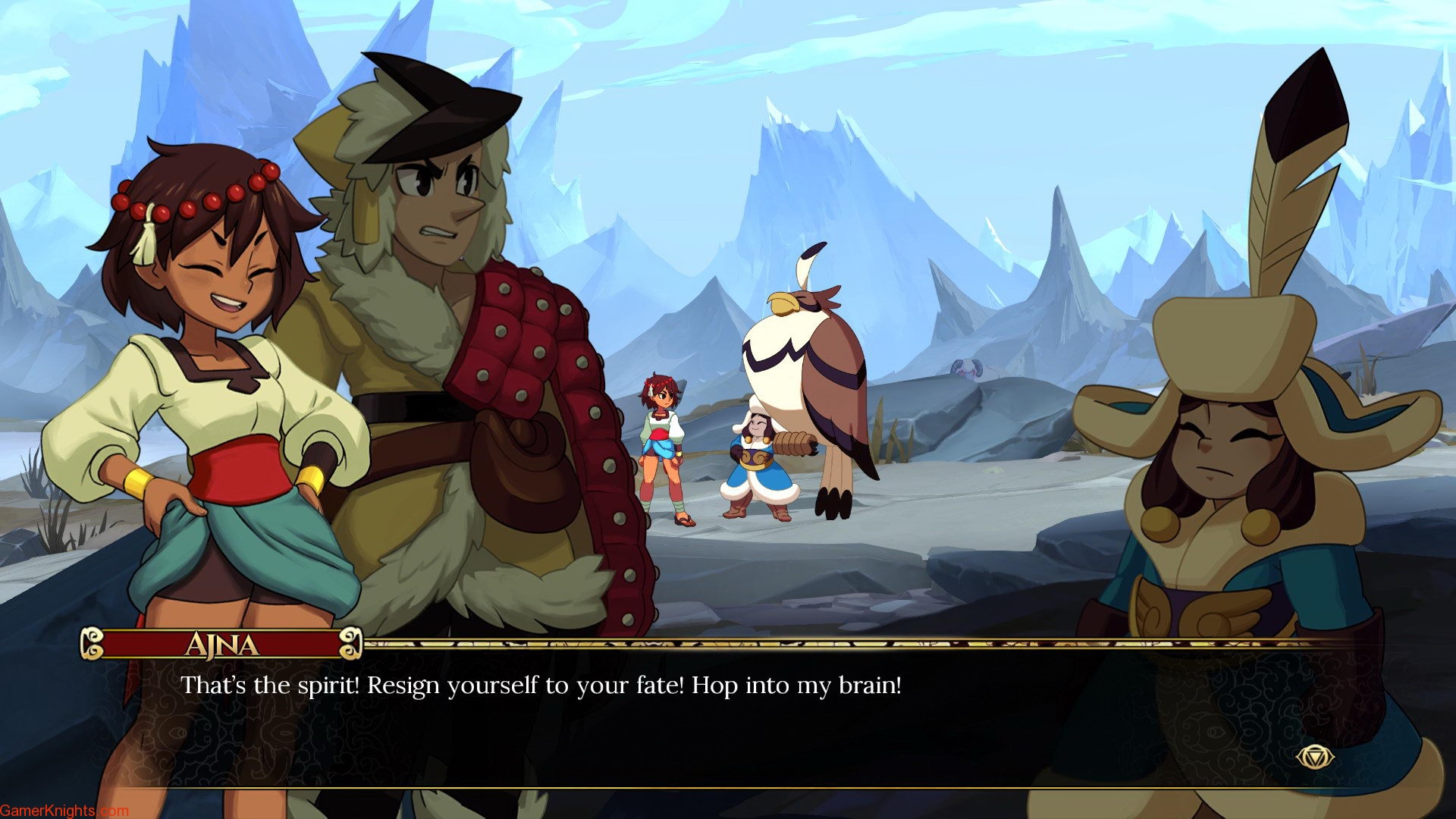 The eclectic party here is the true winner, voiced by a pitch-perfect cast that bring constant levity to the proceedings. Your potential party members are numerous, and as this group grows and grows I was reminded (in all the best possible ways) of Chrono Cross and its expansive, daring suite of characters to pick from. Indivisible isn’t quite as expansive, but it’s far more daring, with some of the wackiest and out-there characters I’ve had join a videogame party… ever! (I should have expected it from the studio that turned a giant trumpet into a playable fighter in their last title)

Balancing who you’re going to head into the next battle with is part of Indivisible’s charm – and its somewhat overwhelming battle system. As you careen through the world on a quest for revenge you’ll bump into the not-so-friendly denizens who always seem eager to throw down. The RPG mechanics at play here  will be familiar to fans of ATB – or active time battle systems – , though it can get quite hectic in any given scrap. 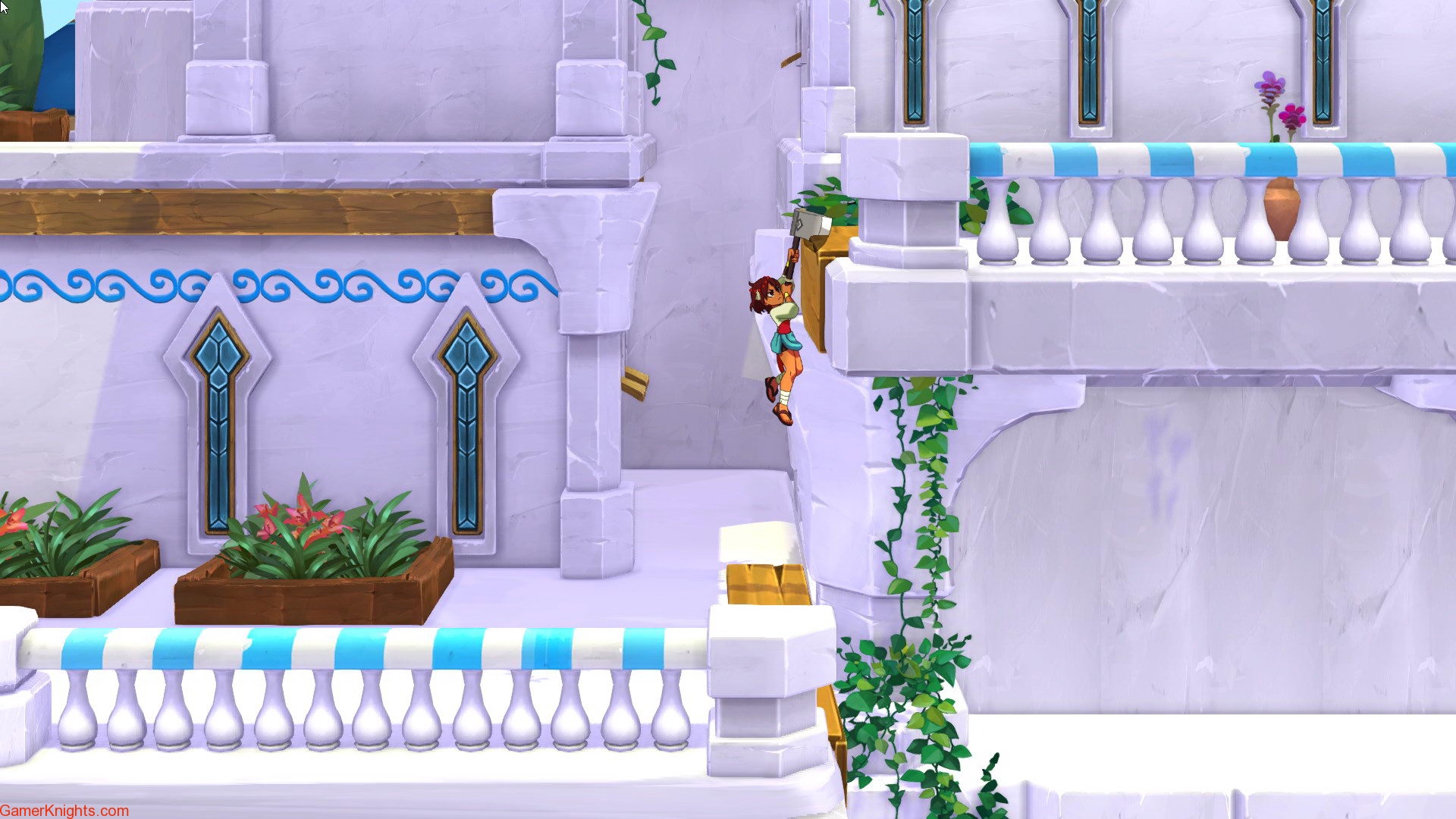 Loading out with four of your favourite fighters, Indivisible tasks you with attacking and defending as the tide of battle ebbs and flows. Each of the controllers face buttons is mapped to a different party member, allowing you to deal some damage or mitigate incoming attacks by hitting it at the correct time. You can augment the attack by holding a direction on the D Pad as well,  and through this seemingly simple mix of commands you can unleash true hell on your opponents.