The Just Cause series has always embraced the ridiculous. Whether it was the advent of the wingsuit and parachute combo, the marriage of physics to endless explosions or the insanely fun grapple-hook mechanics, the franchise has continued to iterate upon its love for the absurd time after time. With Rico Rodriguez’s fourth outing promising far more volatile situations and an even bigger sandbox for unbridled mayhem, you might start to ask yourself when it all gets a little too much. The answer? Never.

Just Cause has, for the longest time, been about tropical locales overrun by deadly militia, under the tyrannical rule of the dictator-du-jour. Just Cause 4 is no exception. Set in a fictional country called Solis, Rico Rodriguez must once again strap on his grappling hook and take the fight to an all new army of mercenaries and their diabolical ruler, to free the people and to have a blast doing so.

Honestly I don’t know what I was expecting going into Just Cause 4, but I was kind of stunned to see it re-tread the exact same ground for the fourth time in a row. It’s not that the set up doesn’t work, because it does a fine job at motivating the cacophony of destruction you’ll unleash upon Solis, but it’s just so tired and worn out that I’m stunned the guys at Avalanche haven’t thought to try something at least a little different. 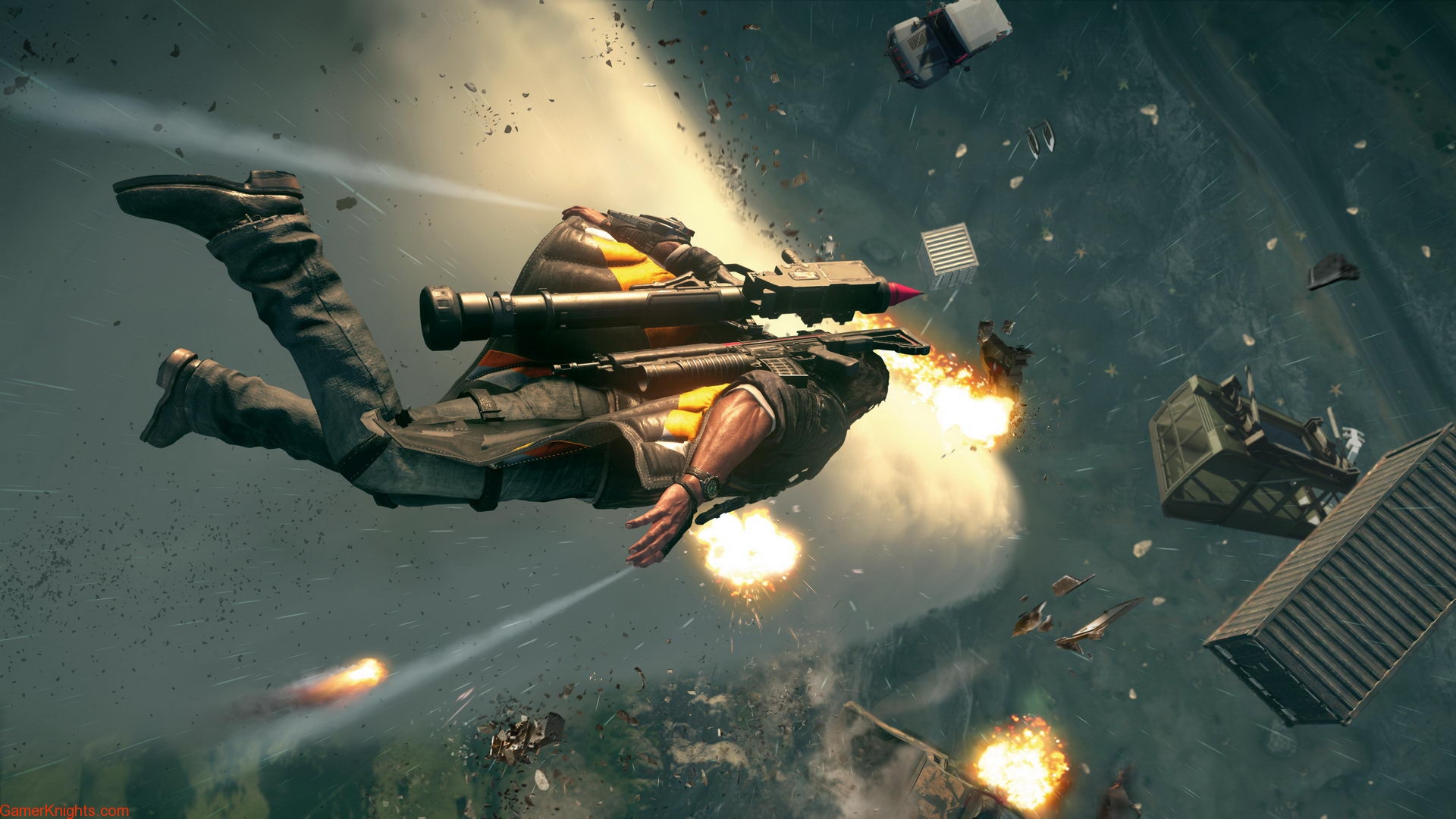 The hook (if you’ll pardon the pun) is that this time around the megalomaniac mastermind behind it all, one Oscar Espinosa, is working on some tech that can control weather. This factors into the titles newest gameplay hooks mostly, though it flavours the story somewhat to set it apart from its predecessors – but only just.

If you’ve played any Just Cause title before you’ll know what to expect here: ultimate, freeform carnage. The country of Solis is a sandbox much like any other open world game, but here that moniker feels more apt than ever. It’s been crafted solely to be toyed with – to be torn down, even. Every militia base, every outpost, every city seems to have been constructed in such a perfect way that a single domino tipping over sets the whole place alight. Solis at large encapsulates this design philosophy, and it should serve to swiftly educate you how Just Cause 4 expects you to play in it. 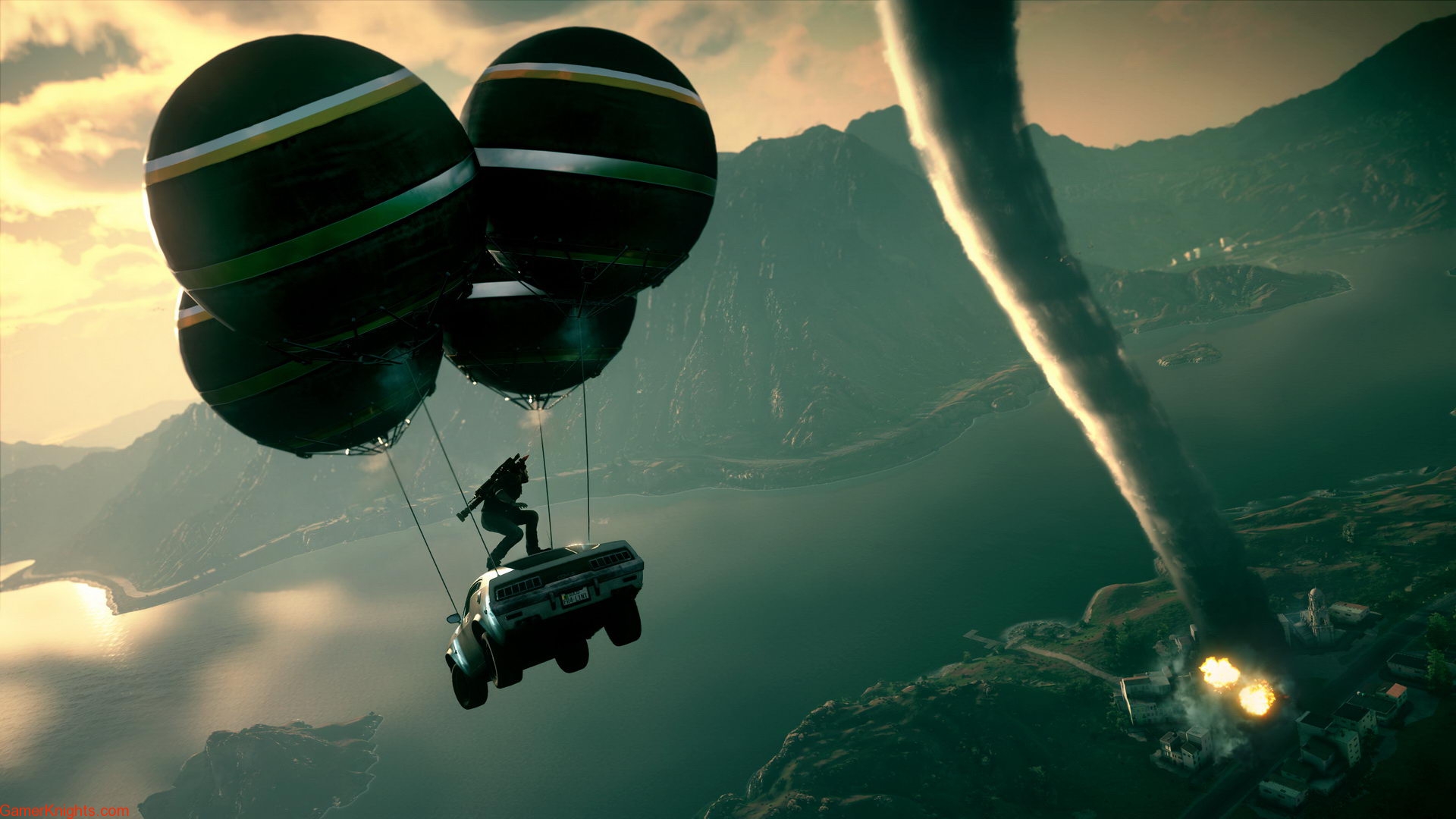 Whether it be swooping in from above armed to the teeth with rocket launchers, tethering massive vehicles together to form a strange, deadly wrecking ball, or just attaching bad guys to skybound rockets, Just Cause 4 is gleeful in its presentation of mayhem. How you’ll play will ultimately boil down to how you enjoy watching things blow up. It’s a challenging game at times, but more often than not JC4 will get out of your way so that you can just mess around and have fun.

It’s a philosophy that’s absent far more than I like in modern gaming, and being able to zone out whilst I rain down fiery hell upon an army of incompetents scratched an itch that had gone unscratched since… well, since Just Cause 3.