It all started with a melody. One that would end up becoming one of the most beautiful things we had ever heard. And that’s what music has: it motivates us, we are passionate about it and it makes us feel all kinds of extraordinary things, penetrating the depths of our hearts … As long as it hits the right notes.

Interestingly, all these qualities are shared by a video game franchise that, despite sharing some history on Nintendo platforms, had not yet landed on Nintendo Switch; something that, with what we bring you today, will change forever, and the time has finally come: Kingdom Hearts: Melody of Memory is already a reality for the hybrid console, and here we come once again to tell you all about this new delivery to the maximum detail.

The game that concerns us on this occasion is one of those that we could describe with the classic “easy to learn, but complex to master” , since, from its own concept, its controls are tremendously simple: we attack with the A or the triggers (They all do the same effect, being able to press two or all three buttons at the same time depending on the number of enemies that face us), we jump with the B (button that we will keep pressed to glide in the air during a prolonged accumulation of time), we activate special attacks with the X and, very rarely, we move the levers as indicated, all to the beat of the music as indicated on the screen. But nevertheless,everything is enriched according to the different approaches that the game takes. 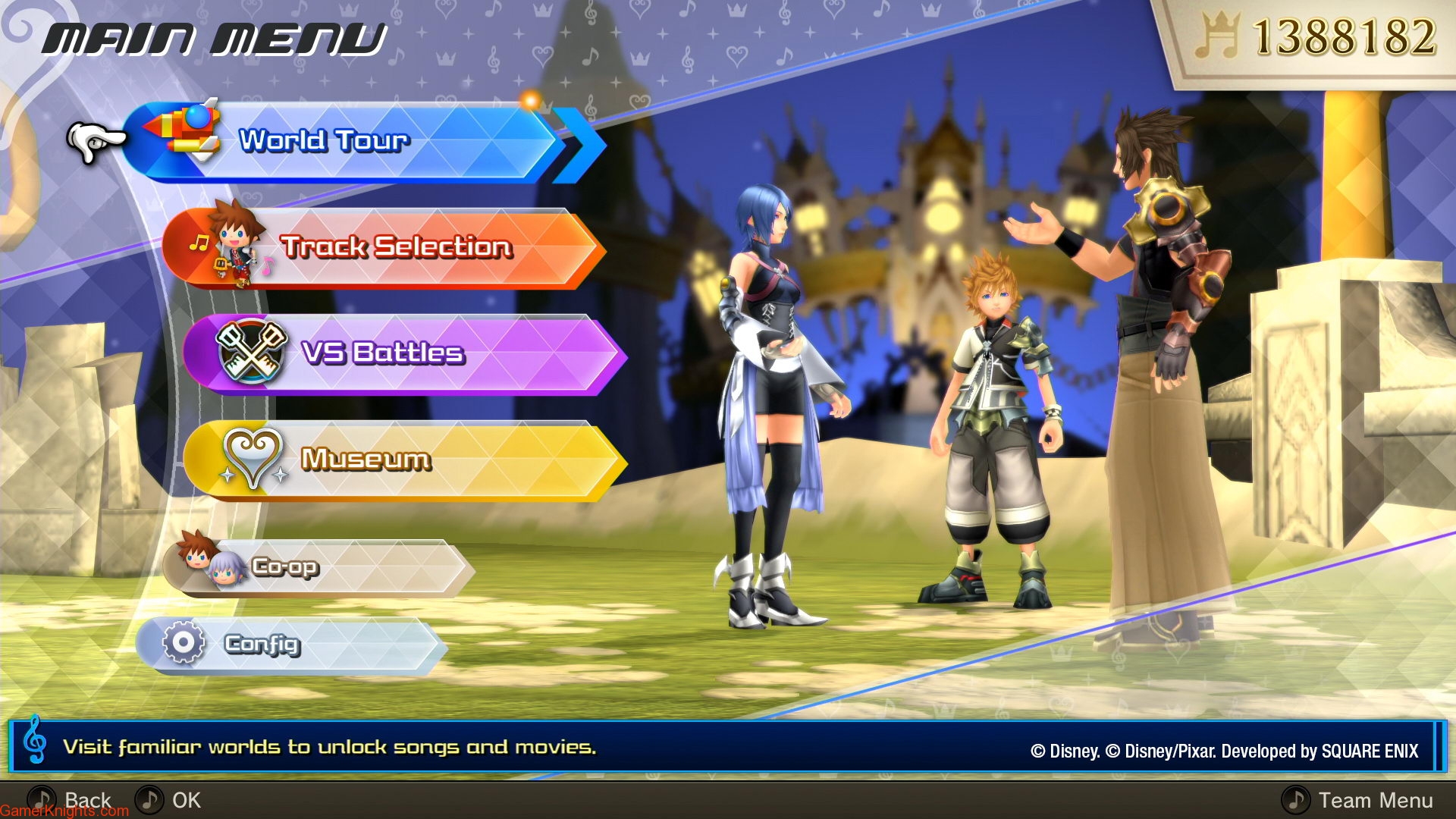 Going back to the beginning, as soon as we begin we will be in command of our Gumi ship , before an extensive map with all the worlds of all the console installments of the franchise. However, we will have to start touring these worlds in the order in which the titles in which they appear were launched on the market, unlocking them one by one by completing missions (challenges to be met in each phase, with a total of three different ones for each one) in the different levels of difficulty that are presented (again, three per phase, being the beginner, intermediate and expert levels).

As expected, despite being a rhythm game , the title has characteristics inherited from the main series, such as the fact that the characters we control level up depending on our performance or the ability to forge objects with them. Materials we collect by breaking boxes or barrels in phases. Oh, and as a note of clarification; These items are not activatable in the middle of sessions, but instead are consumables selectable before each phase begins that do things like give us vitality or offer us more experience than we normally would get. However, an object that is remarkable above the rest is one that allows usSummon King Mickey himself as an ally in a phase, which will allow us to heal ourselves and obtain a higher score than usual; remember, do not miss too much, because if your health bar ends up emptying … it will be time to repeat the phase again! 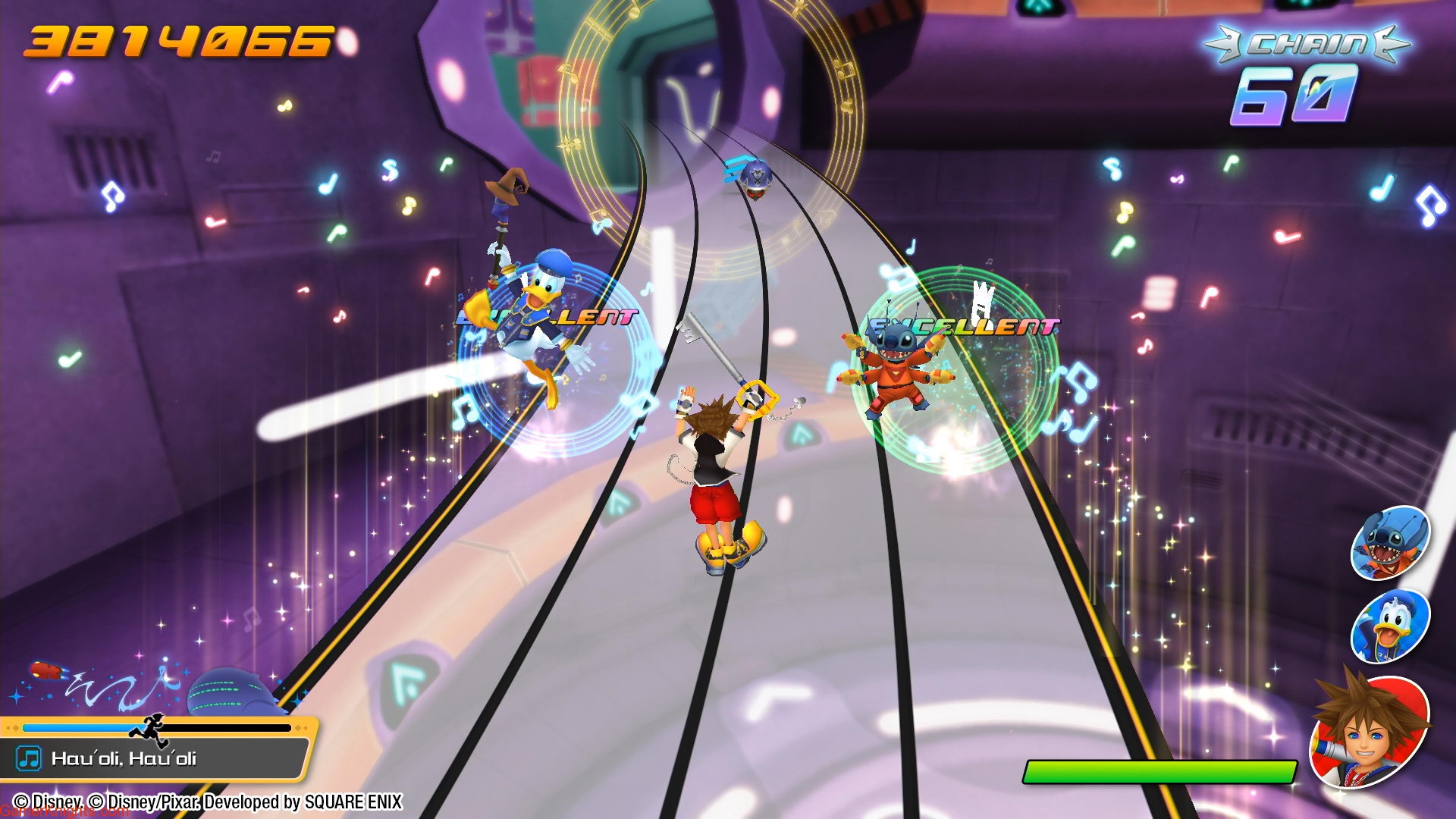 To conclude with regard to characters, in the game we can choose four different trios , which are not customizable (that is, we cannot mix the members of different groups to make our own), which in the end neither It is so serious since they are thematically related (for example, we do not reveal the wheel if we tell you that two of the four available trios are Sora, Donald and Goofy and Aqua, Ventus and Terra). Even with those, it goes without saying that this option would have been appreciated. To close this matter, another detail that we think could have received more care is the option to add costumes for the characters in the different phases (so that, for example, Sora would wear his famous Halloween clothes in the phases of “Nightmare Before Christmas” instead of wearing the same outfit from the first installment for practically the entire game), however, we understand that these are details that would have involved a fairly high additional effort compared to what they suppose: a mere aesthetic change.