A game to sink your teeth into.

“Maneater” was the video game I never knew I always wanted. I’ve thought sharks were equal parts awesome and terrifying since I saw Jaws way too young – and subsequently became scared of the bathtub -but never did I think such an addictive and fun game could be fashioned out of their violent lives… or at least the violent lives they tend to lead in our media.

And media is at the heart of Maneater. Framed like a reality show in some backwater bayou, we view the sharks initially through the eyes of a group of hillbilly-cum-hunters. It’s a neat set up, and one that the game pays homage to throughout with a narrator feeding us bogus facts about the shark we’re playing as.

Cut from the corpse of our mother as a shark pup, we set out to grow big and strong and finally eat the hunter that changed our sharky little life. Growing strong, naturally, involves plenty of wanton murder, both in and, suprisingly, out of the water. 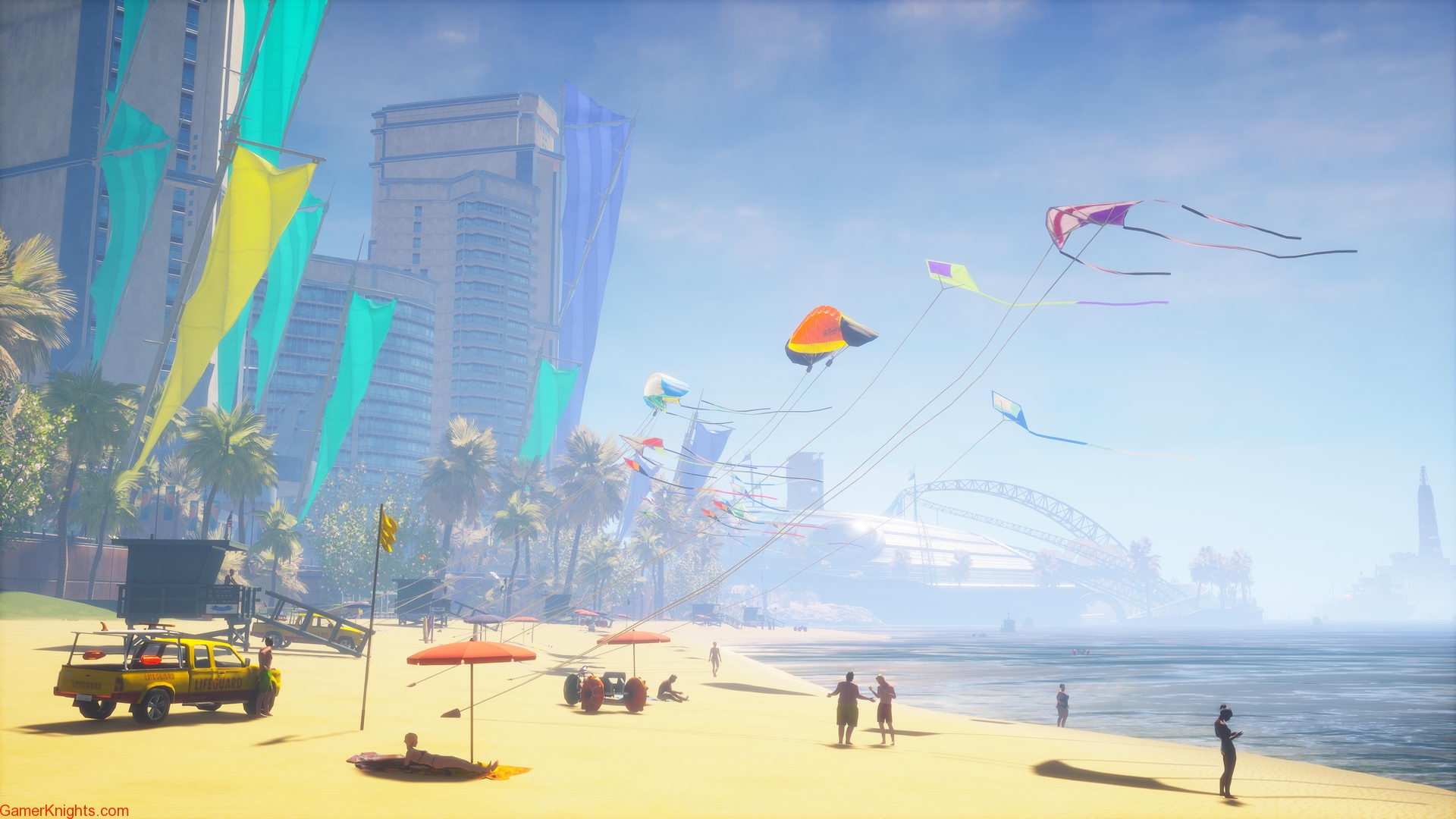 Maneater seems like a goof, and for the most part it plays like one too. Once you get used to the cumbersome controls that really don’t feel particularly intuitive to start with, you’ll get to grips with cutting through the water and chomping on anything that moves. By doing so you can earn level ups and upgrades to your shark, which range from ludicrous tribal tattoos to even more ludicrous bio-electric fangs and extra-streamlined fins. It’s all silly, but Maneater knows it, and more to the point leans into it in the best possible way.

Levelling up is brilliant fun because of how crazy your shark can get, and its all tethered to a system that allows you to customize your own killing machine to your liking. Growth in this game never felt insignificant, and it feels especially rewarding when you reach a size and level to take on predators that have been making your trips through the varied waterways a nightmare up until now. Killing my first big croc felt satisfying and vengeful, and that’s a feeling that pumps throughout this lengthy campaign. 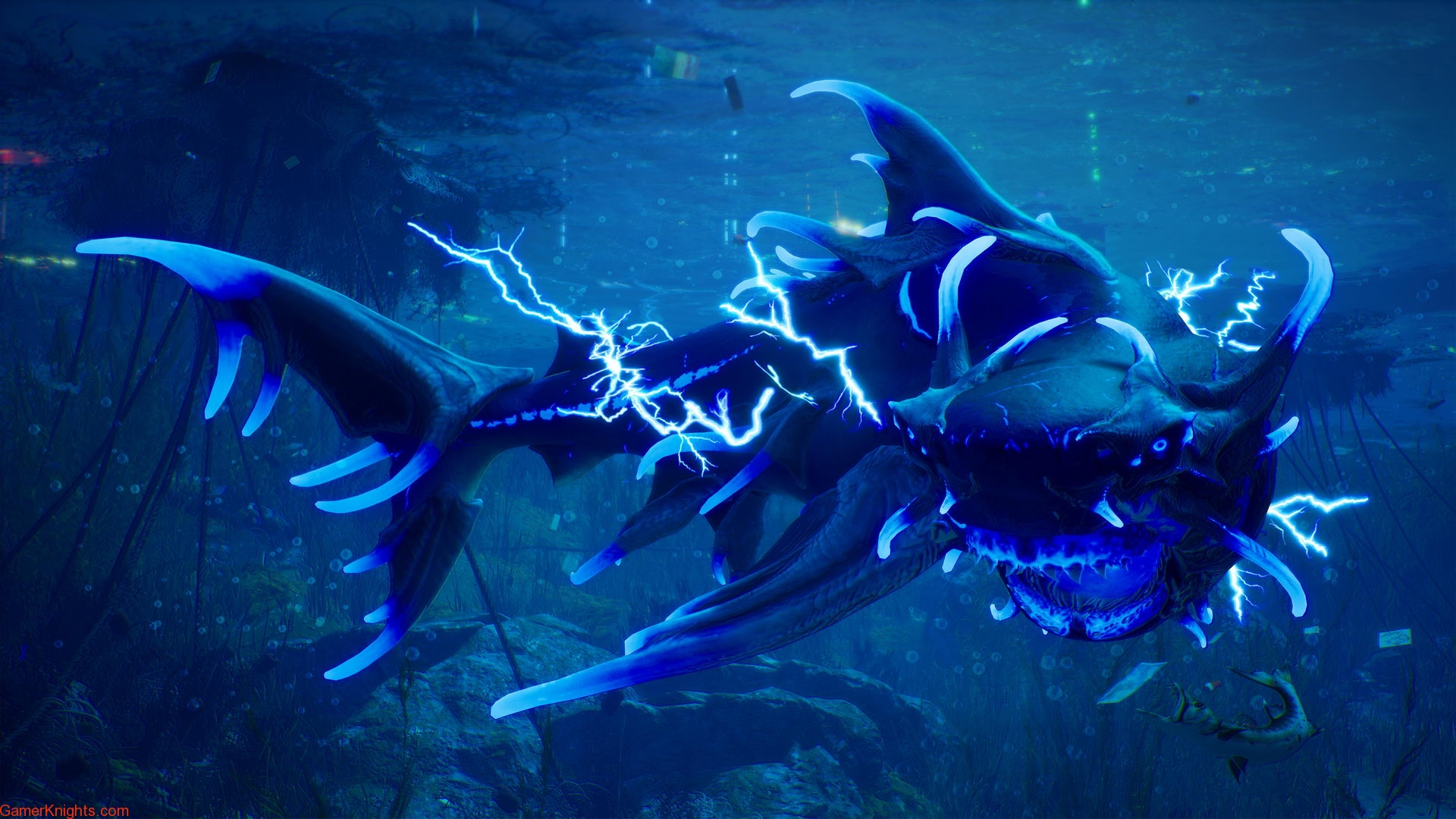 Killing the dumb humans atop the water’s surface is always worryingly enjoyable as well. Jumping onto their boat and thrashing around, chewing on one guy whilst you tailwhip another into the horizon never really gets old, and neither does flopping up a beach and chasing terrified locals (they really should have closed the beach…)

The presentation is the only significant area where the ball seems to have been dropped. The design itself is often fascinating, with some crazy-looking stuff underwater to make up for the so-so visuals in the human world above. But the graphics aren’t anything to write home about.

The animations also get a bit tiresome after your 500th thrashing session to kill prey faster. Nothing really moves all that believeably , and the repetetive nature of the combat itself is worsened by this clunky and rigid movement. It’s not all that bad, but it really isn’t all that exciting either. 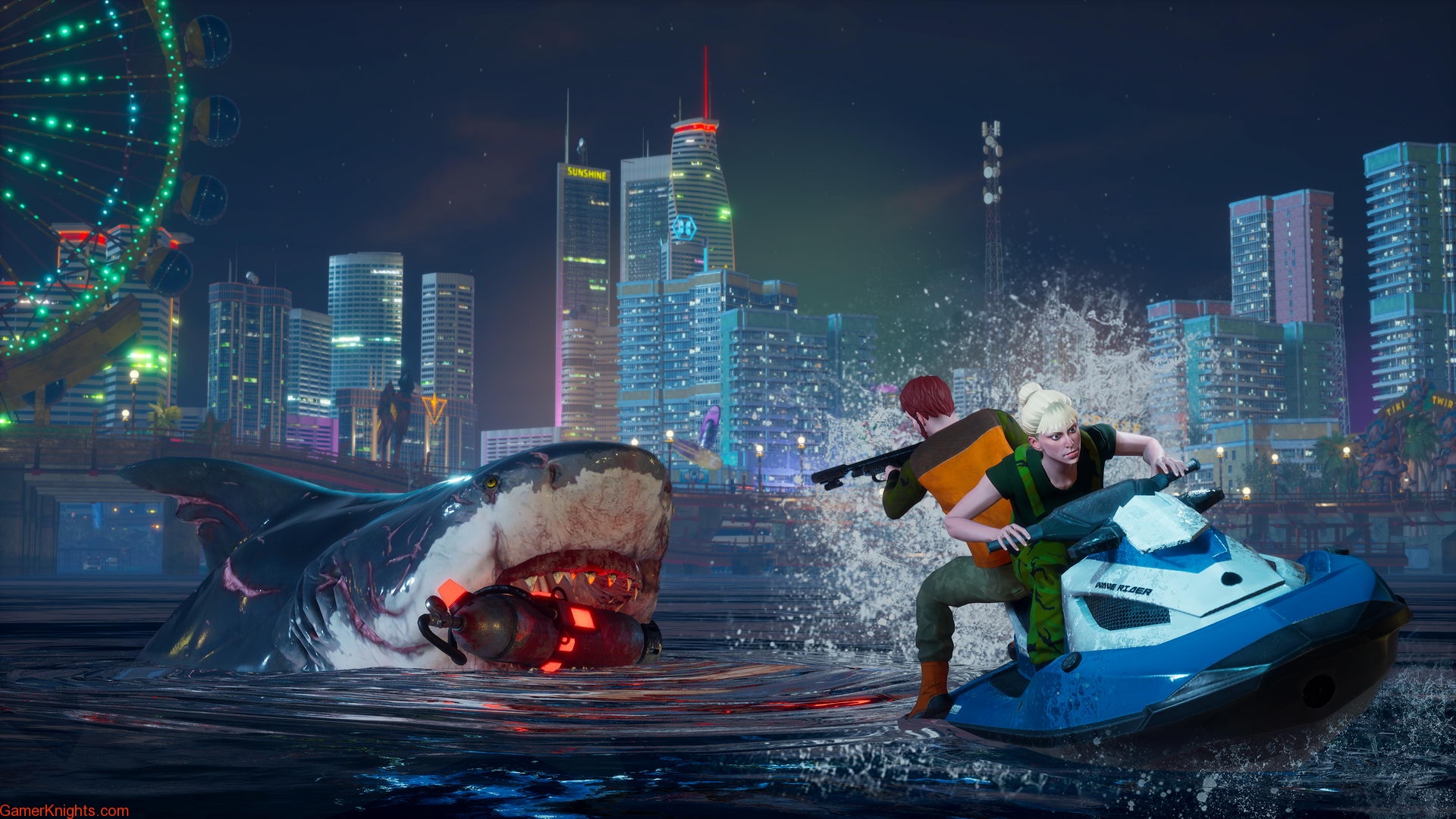 Luckily the sound is great – the music is admittedly forgetable but the voice acting is always a hoot. Chris Parnell (Jerry from Rick & Morty) has a gleeful turn as a woefully misinformed narrator, and the various backwater hunters all sound agreeably killable.

“Maneater” is just plain fun. It’s not going to win any awards for diverse gameplay or beautiful graphics, but it’s a minute-to-minute honking good time. It values the joy in the little things, like sailing unrealistically through the air over a pier and taking a great bite out of someone’s face as you do so. It’s about the triumphant feeling as you become the rightful king of every body of water in the game.

It’s about being a god-damn shark, and it never needed to be anything more than that.