We live in the era of games as a service, that’s clear to see. Even single-player games are apparently obliged to continue adding content after launch. Several years ago the AAA videogame industry crossed over to this format.

In this context, Square Enix, Crystal Dynamics and Marvel set to work on a title based on the most popular group of characters of the last decade: the Avengers. Expectations ran high and there were reasons to get your hopes up, but there was also a great deal of fear. Fear that the worst vices of the AAA industry, micro-transactions and games as a service would ruin the dreams of a whole generation. Unfortunately, these bad influences and trends turned into a villain that not even Captain America, Thor, Iron Man, Ms. Marvel, Black Widow and Hulk could defeat.

Worst of all, Marvel’s Avengers starts off very promisingly, showing us about two and half hours of what could have been a cool adventure but which just couldn’t escape from the game as a service format. The star of the story is Kamala Khan (Ms. Marvel), who wins a fan fiction contest and is invited to San Francisco for Avengers Day (A-Day) and the chance to meet her favorite super heroes. 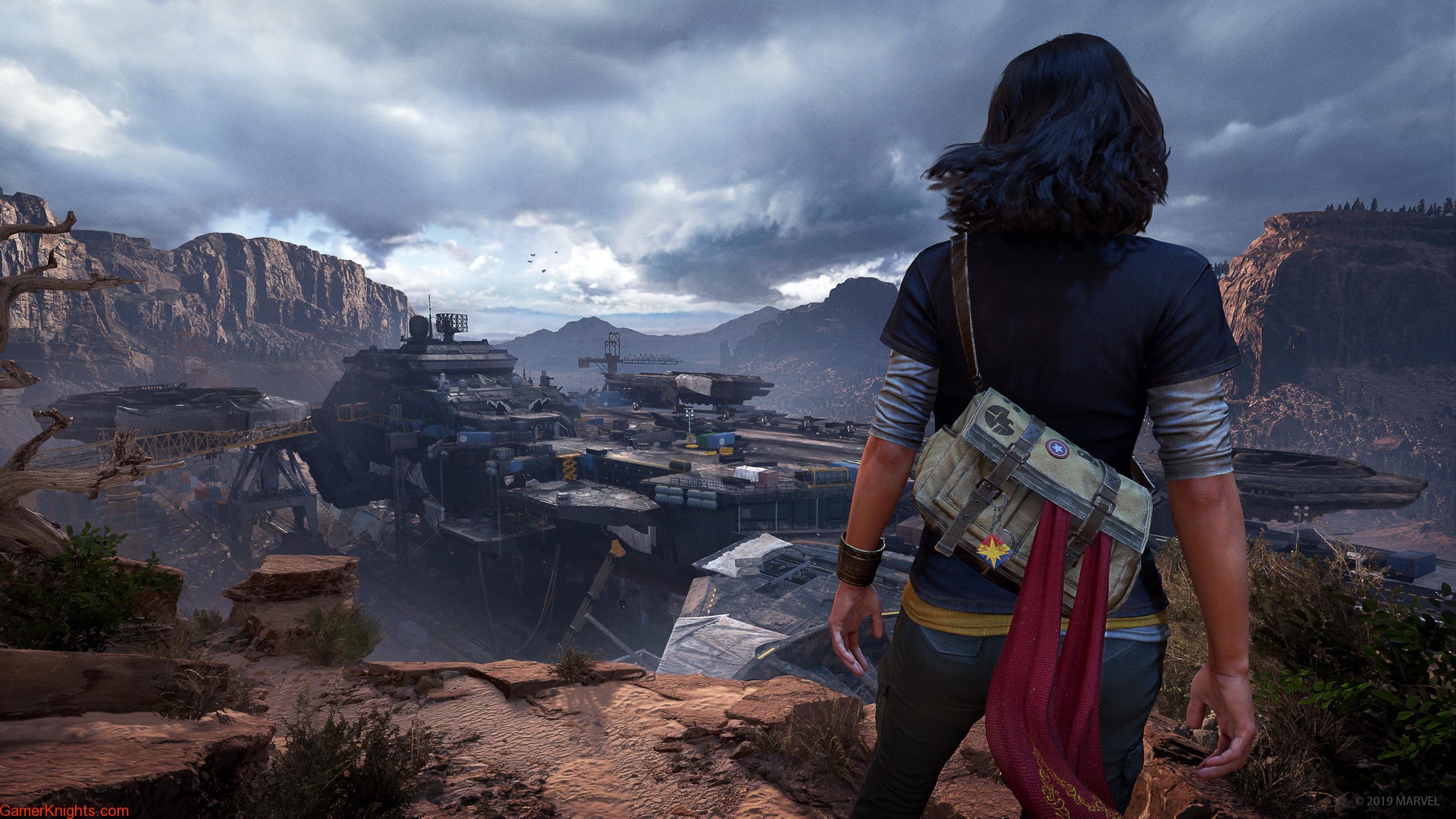 At the festival we come across a kind of fair or theme park of Marvel characters with all kinds of rides, Easter eggs and details to look out for. It’s a beautiful start with good intentions between Kamala and the rest of the team, with a lot of heart and good humor; everything we like in a typical Marvel story. These pleasant moments are interrupted with an attack on the Golden Gate Bridge and because of the instability of Terrigen, a new energy source that was feeding one of S.H.I.E.L.D.’s Helicarriers. The ship explodes, causing the death of many citizens and also the creation of Inhumans. The city of San Francisco is put on lockdown, the Avengers feel guilty about what happened, and the AIM robotics company takes control of Stark Industries. Four years pass. Kamala Khan has become an Inhuman with special skills and an urge to find out what really happened on that A-Day. And so goes a story in which our very charismatic and endearing, although at times too intense, heroine tries to get the Avengers (they’re now public enemies) together to stop the forces of AIM commanded by George Tarleton, aka MODOK.

These first missions show the best that the game has to offer. The more linear, cinematic, spectacular and focused Marvel’s Avengers is, the better it feels. Unfortunately, those good intentions that it shows with a good universe creation, good dialogues between our favorite heroes, and spectacular escapes and action sequences, are completely wasted when the game opens up and shows its true colors. When we have access to what’s called the “War Table,” the pace of the campaign falls apart completely and the game starts to throw filler missions at us focused on multiplayer content. Again and again and again we have to start one of these so-called “War Zones” in a deserted forest, in the mountains of Utah, in the snow zone or in a very badly recreated New York. Very few scenarios that always give us the same secondary objectives to carry out and a main one that consists of managing to get into the AIM base/laboratory, get in an elevator and fight the same old enemies. In this laboratory we are forced to complete tasks taken from the likes of Battlefield or Call of Duty, making us capture control points crudely and inelegantly, break a few generators or hack some stations. Maybe we take another elevator to another zone in the same base or maybe the mission ends there: we really have no way of knowing and whatever happens, the end will always be anticlimactic and unsatisfactory. 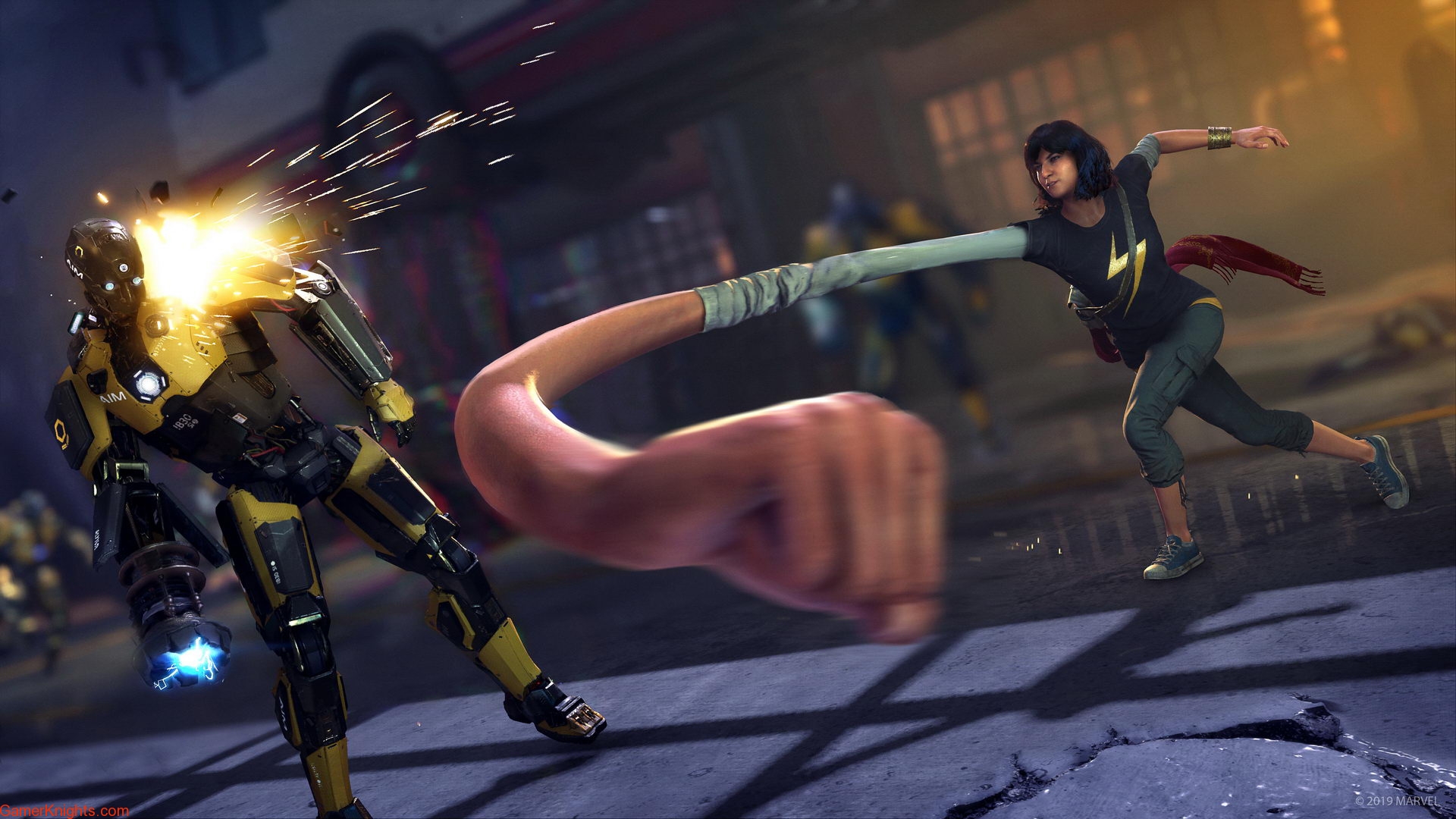 So it is that things like the tender moments between Bruce Banner and Kamala Khan, Tony Stark’s charisma, or Black Widow’s exasperation at her inept companions, are small drops of flavor that are made bitter by an extremely limited imaginary. We feel that we’re stuck in a loop more eternal than lockdown itself when we pass for the umpteenth time through the same forest, with the same AIM structure, with the same secondary objective to fight against the same robot. There is no variety or anything, or locations, or enemies, or objectives; there is zero creativity when it comes to giving us things to do, in a game I’m supposed to come back to week after week to get better pieces of equipment. Apart from everything else, one of the main sins that this game commits is that it doesn’t take advantage at all of the rich and enormous range of possibilities that the Marvel universe offers. There are no iconic locations, there’s a limited cast of secondary characters and there are literally four “villains” in the whole game, two of whom only appear in one mission to then return in the endgame in the form of bosses in a Warzone. These don’t make the most of these antagonists at all, and with the exception of MODOK, we get the most generic and hollow versions of these characters. It’s remarkable how little Square Enix uses the universe that has defined the last decade of popular culture. 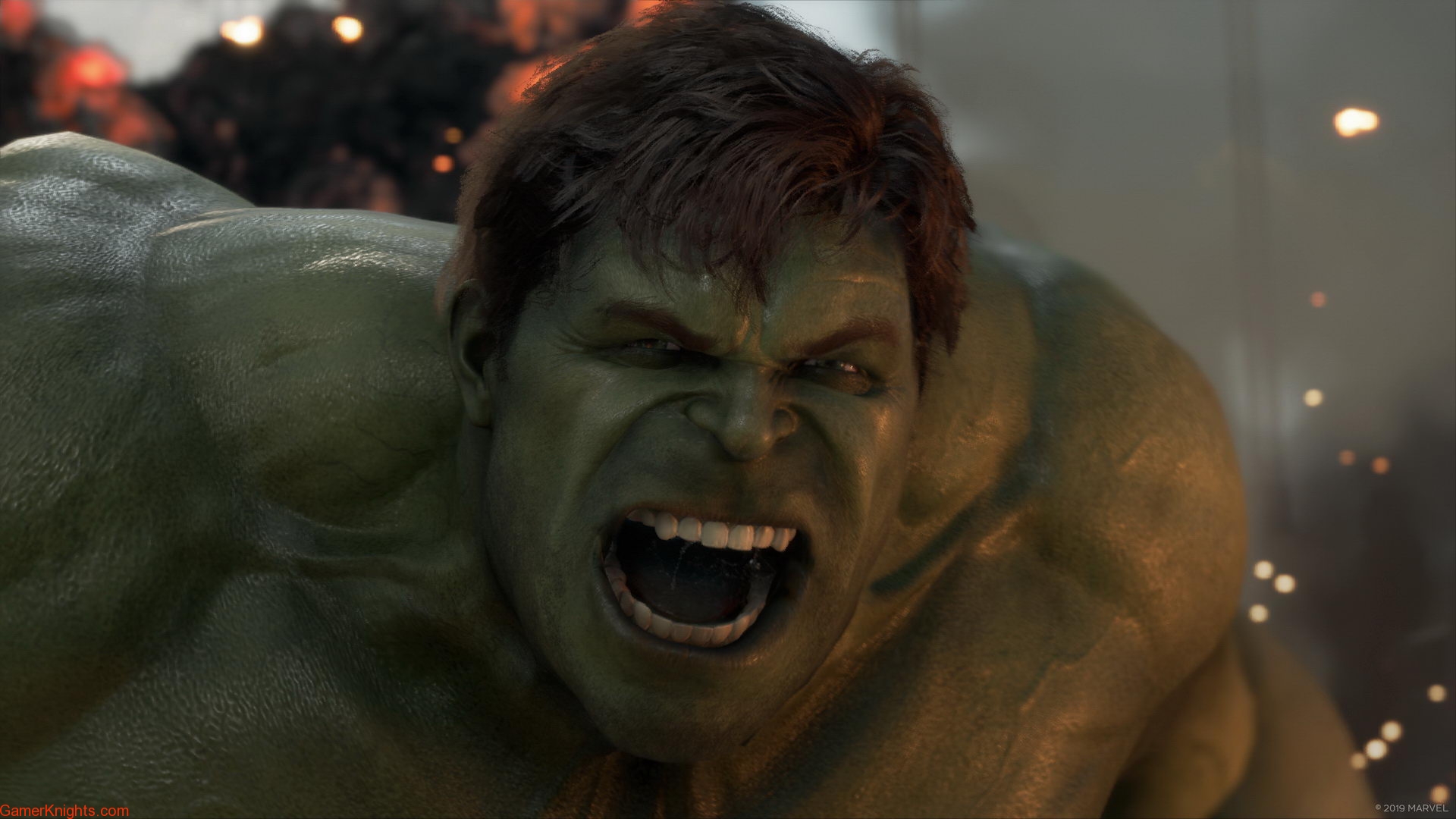 After installing the latest patch, presentation/gameplay runs a lot smoother. Mostly all performance and technical glitches are gone. At the same time I think that there are some aesthetic decisions that don’t seem right. Aside from the appearance of the characters, the saddest thing is how generic each structure, platform, laboratory and enemy feels in the game. There doesn’t appear to be any kind of defined artistic direction in Marvel’s Avengers, with uninspired designs that don’t do justice to the universe they belong to. Something that can be salvaged is that the heroes we play with feel different enough from each other so that the experience doesn’t become even more repetitive. In a game that seems to have had so little work put into it in terms of variety, the fact that they put a lot of effort into creating attacks, movements, combos, special skills and ways of moving that are befitting of each hero is worthy of praise. Even flying characters like Thor and Iron Man fly with different purposes and ends; living the Marvelite dream of playing with each of these characters and having them feel like we always imagined is sufficient placebo as to forget, even if it’s just for a second, the mediocrity surrounding the rest of the experience. 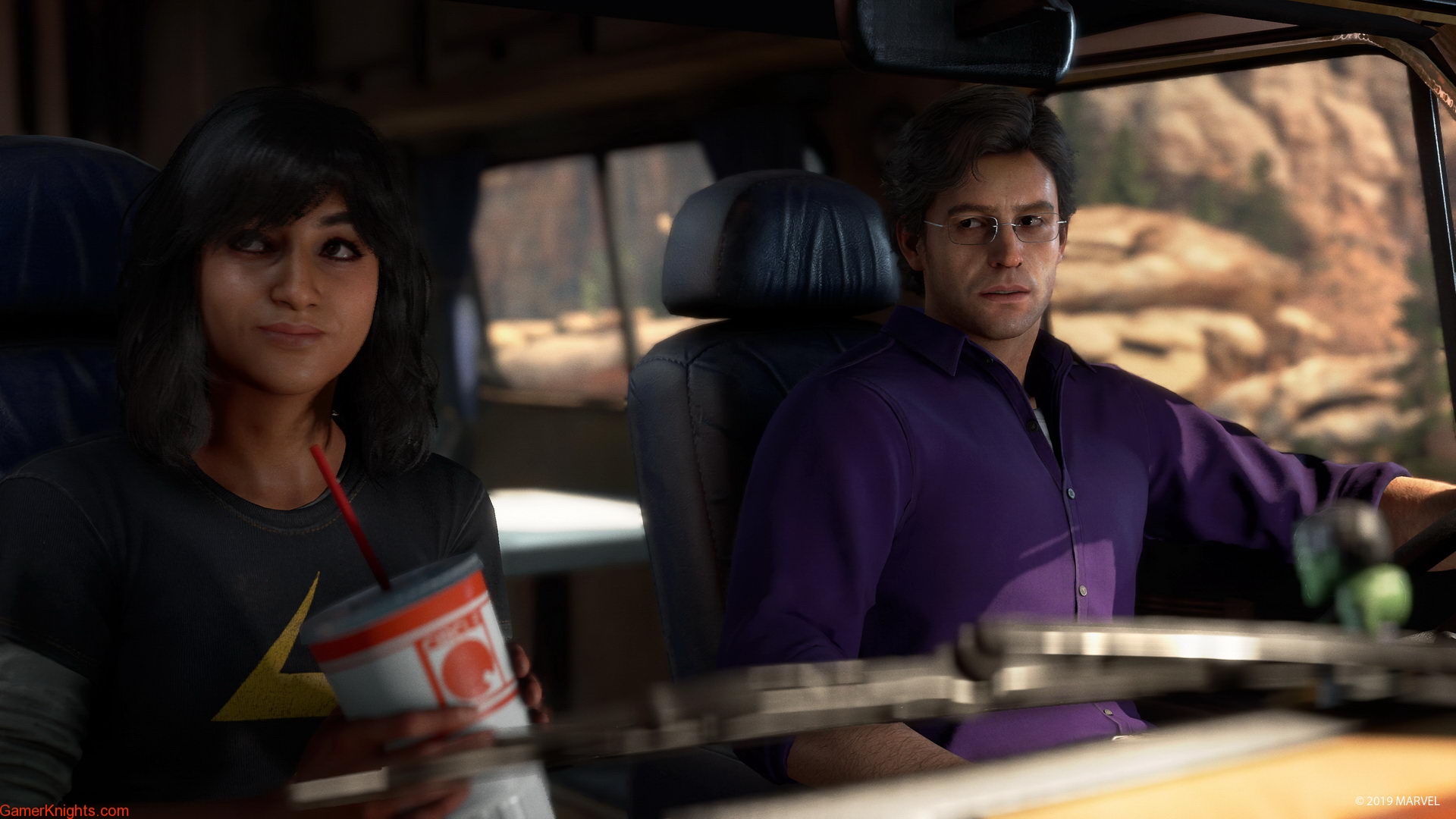 The combat itself starts off too simple but gradually starts to demand a little more commitment as you have to dodge and parry with a certain accuracy. The bad news is that at times there’s so much happening around us (dozens of enemies, another three companions fighting and explosions all over the place) that it’s hard to know what kind of attack an enemy is going to make, which makes it hard to respond. When we manage to disengage brain, the combat is fairly entertaining and looks OK, but that fun clashes with the lack of direction and purpose in the endgame. Once we finish the campaign we are given a list of missions to complete which will take us to the same type of Warzone as always but with the occasional different dialogue on the communicator. We enter an unsatisfying progression loop that forces us to repeat content with the simple purpose of having equipment to go up to the next power level and complete the same type of missions against enemies on the next level. No carrot is dangled in front of us; there is no exotic loot to go after or an air raid to aspire to. I honestly don’t know what motivates users to come back to this game week after week, not even the cosmetic items are very interesting.

Marvel’s Avengers is a pastiche of game mechanics and structures that walk on opposite paths without a clear direction. On the one hand we have a one-player campaign that could have been really interesting but which never really gets going because it’s limited by multiplayer missions crow-barred in to squeeze every last cent out of the game as a service model. We could have had a great cinematic single-player experience but in the end Crystal Dynamics didn’t give us one thing or the other; no story up to the standard of the Marvel universe, or a game as a service like the most successful ones on the market.