When the Gamecube ruled, Nintendo changed the great game system that ‘Paper Mario and The Thousand-Year Door‘ had, to something more similar to traditional Super Mario games, and making it more player-friendly.

This served to broaden the foundations of the Paper Mario games, but it also drove away those looking for a deeper and more traditional gameplay, straying further and further away than it was in its day with subsequent Wii U and Nintendo 3DS installments. Nintendo has noticed this event over the years, and has wanted to go back slightly to its roots with Paper Mario: The Origami King , a game that aims to do a lot of things, and from the hand of Intelligent Systems … it can’t be bad.

Within all Super Mario video games, the Mario and Luigi and Paper Mario saga are the ones that delve deeper into the story, the characters and the universe of the plumber, so in The Origami King we could expect something that would strike a chord with the fans . From “moment zero” we can already see that the game is something different from what we are used to.

Mario and Luigi have been invited to Toad City, the place where the Origami Festival takes place . When they arrive at the village they realize that there is not a soul in the streets, so both plumbers decide to go to Princess Peach’s castle, to find out what is happening.

Mario’s surprise is capitalized when he receives an origami Peach, completely folded and urging him to join his cause. Apparently an evil origami named Olly has proclaimed himself the new king of the Mushroom Kingdom, he wants to transform everything and everyone into mindless origami dolls, and of course, he wants to kill Mario.

On this occasion, our protagonist must join forces with Bowser and his henchmen , as well as King Olly’s sister, Olivia , who will grant him special origami powers. We think it’s great for The Origami King that Bowser is not the antagonist. It gives the opportunity to new characters to occupy a role that is more than burned by the king of the Koopa, and that in this game works wonderfully. 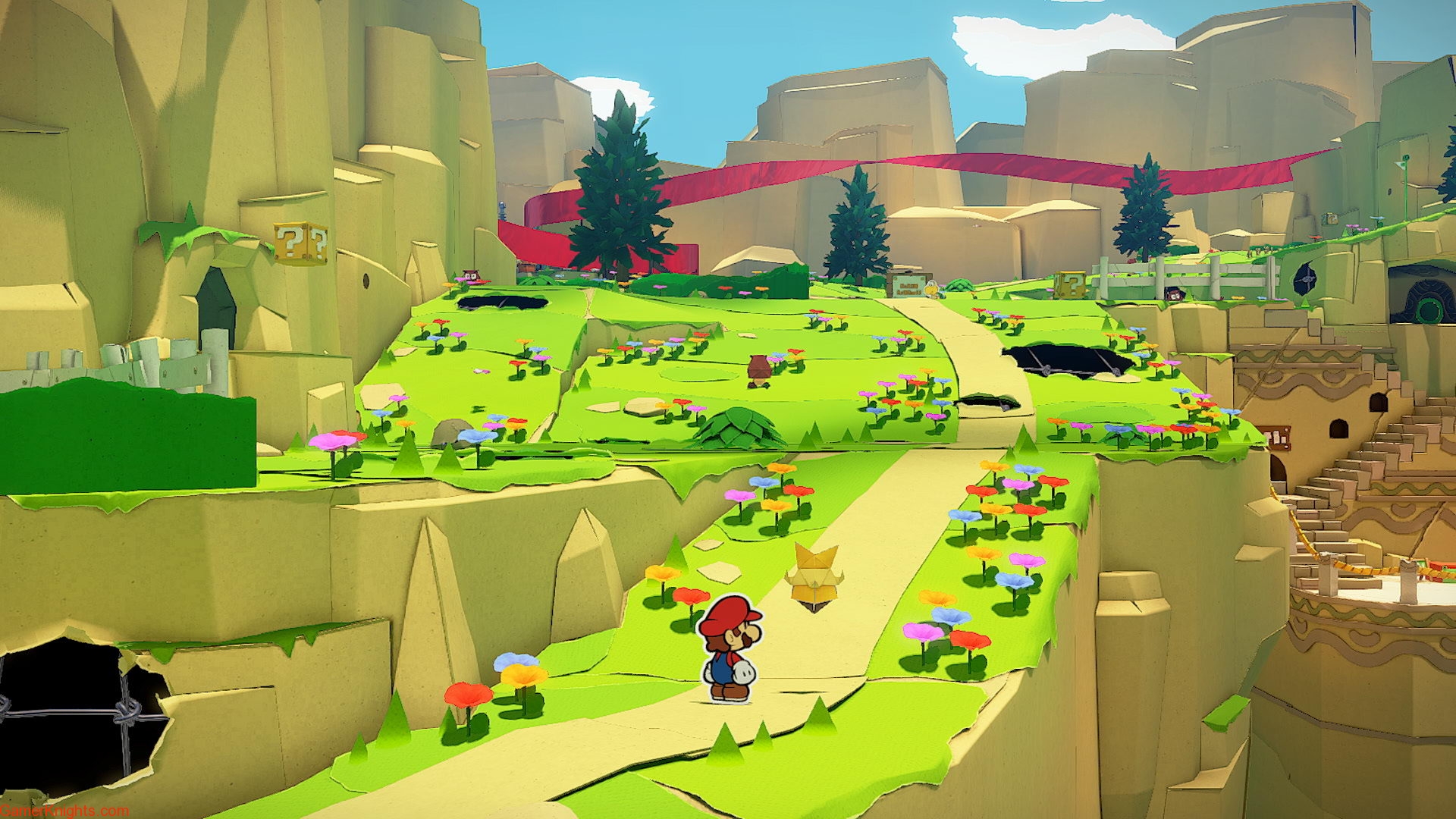 It also delves into the feelings and concerns of the characters, especially Mario’s companions during the adventure. Olivia, to give you an example, suffers an internal struggle, debating between helping her brother or stopping him, feeling guilty for the damage that she has indirectly caused.

It is a game for all audiences, and although there are moments of explicit violence as we already had them in La Puerta Milenaria (made of paper, yes), it is complemented by a wonderful and very well brought humor that any type of player can like.

Don’t expect to find yourself with a wonderful plot either, but it is complex enough to capture the attention of players, and it gives reason to continue the adventure as we liberate Princess Peach’s castle from Olly’s magical streamers.

Many will have been disappointed to see that this Paper Mario, which is an RPG at heart, has no experience or levels. Nintendo has wanted to simplify the way an RPG is conceived, mixing it with a lot of other genres and finally obtaining The Origami King.

The first big change has been the battles. Now they will have two game phases, one in which our intelligence will be put to the test by solving very special puzzles, and a more traditional one in which we will have to hit the enemies using different Mario weapons, mainly shoes and hammers.

Nintendo and Intelligent Systems have created a new type of circular puzzles, in which we will have to position the enemies around Mario with different formations , and thus make it easier to hit them. All normal combats can be finished in a single turn, but for this we will have to solve the puzzle correctly and hit the enemies very hard. 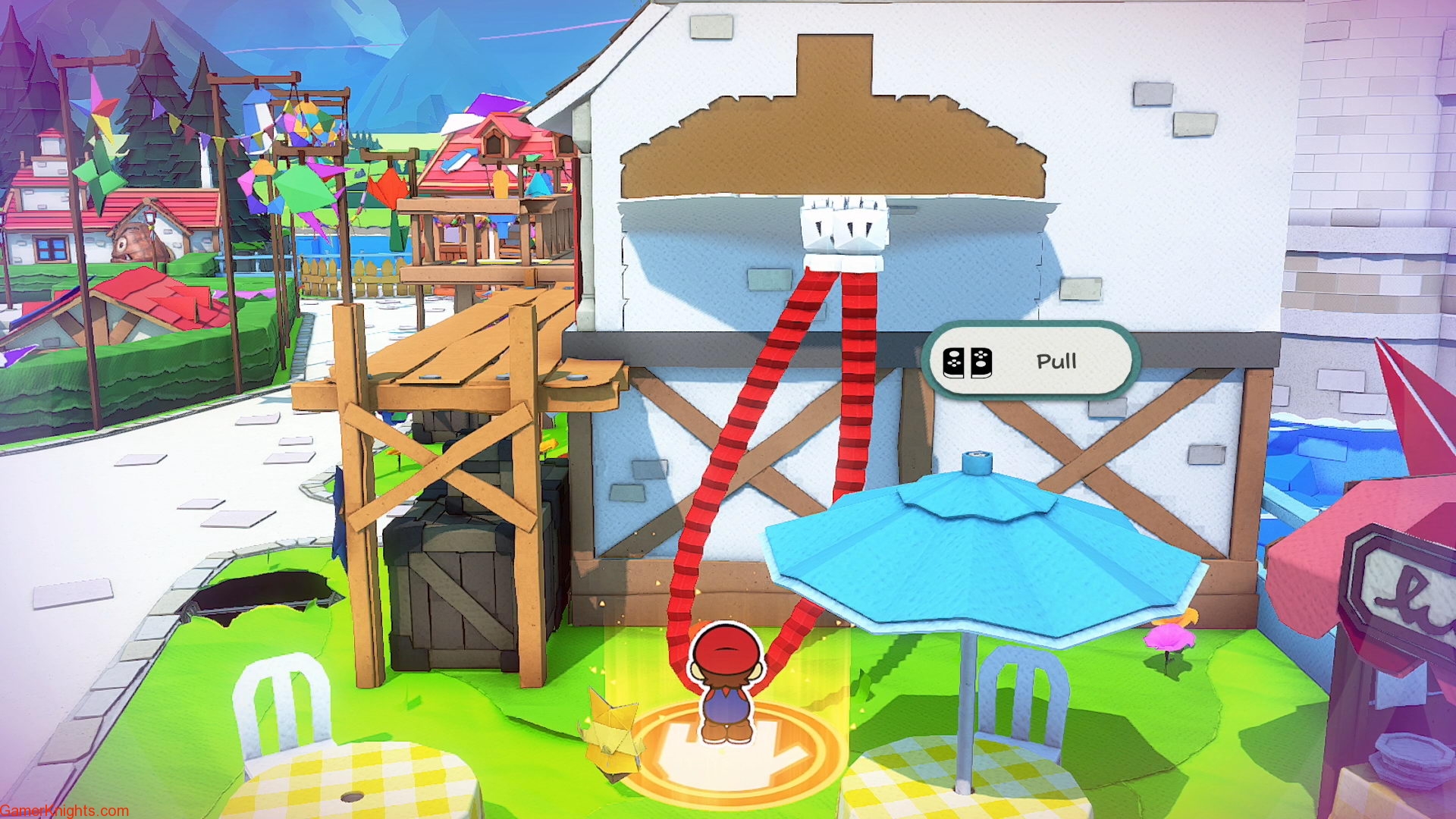 At the end of each battle we will receive coins, which can be used to buy in stores, buy time to solve the puzzles more slowly, or ask the Toads for help and throw us a cable if we get blocked. The puzzles that we find during the first three or four hours are relatively simple, but as we progress through the game they get more complicated, being able to make up to three movements, sliding or turning, and in any annular direction. The possibilities in the end are enormous , but as a general rule, you usually have only one solution.

By not gaining experience we will not have to level up Mario, but we will need to fight to earn coins and fill our pockets with confetti, a new mechanic that makes us fill parts of the stage that have disappeared. Indeed, it is practically identical to the paint hammer in Color Splash !, basically because many mechanics have been reused in The Origami King, although they are still fun.

Outside of the fighting, a huge world awaits us full of secrets, puzzles and nooks and crannies that will make us explore every inch of this precious paper kingdom . One of the secondary missions, although it is given great importance, is the search for Toads, who are hidden around the scenes in the most unsuspected places, camouflaged as bugs, hidden in holes, or stuck between objects. This together with the blocks and the treasures is the key and the objective of this Paper Mario: to try to get everything that the game offers.

It is rewarded in the form of concept arts and trophies, which will appear in the Toad City museum, which is why we believe that the game will delight collectors fans.