Devil Survivor 2 returns with a significantly beefed up version of the DS original, bringing with it smart changes and heaps of new content.

The original Devil Survivor 2 launched a few years back on the Nintendo DS and happily joined the ranks of that system’s fantastic RPG library. Four years on and I’m excited to welcome DS2: Record Breaker to the 3DS’ similarly stellar choices. The industry is re-release mad at the moment, we’re enjoying a renaissance of repackaged-but-barely-touched cash grabs, and very few of them are worth our time or money. I can safely say, however, that Record Breaker – with its wealth of new additions and changes – definitely bucks the trend.

The main story of Devil Survivor 2 revolves around a group of Japanese teens who are attempting to save the world from destruction. So far, so predictable, right? But luckily DS2 has enough unique hooks and twists to keep the story from venturing into the cliché you might expect. Chief amongst them might just be the setting, a refreshing take on contemporary Japan. Megaten fans will have come to expect this more modern scenario, especially with the popularity of the Persona games, but I’m still eager to hop into these recreations of Japan and mess around in them.

The story begins a bit like a Final Destination film, with the main characters (along with their entire school) downloading a mysterious app on their phones that will send them videos of their friends dying. You might think this sounds weird and macabre, and you’d be one hundred percent right. Everyone at school is super eager to receive this mail and they literally can’t wait to see how their friends will die. I’ll be honest, this really unsettled me. Whether it’s the strange storytelling of the developer or a slightly off localization I can’t be sure, but it’s a troubling focal point and a beginning to a game that only gets weirder as the hours roll by.

There’s a lot of story here, too. In fact, a lot of the ‘gameplay’ of Devil Survivor 2 boils down to a visual novel; 2D character sprites and a lot of text. This interactive story, that allows you to select your characters dialogue and make fairly demanding choices from time to time, takes us between the titles many battles. Your actions dictate which of the games multiple endings you’ll get, so it really pays to pay attention as the world goes to hell around you. 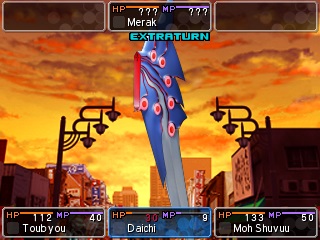 Battle is a little different from most of the Megaten games I’ve played; instead of the first person, dungeon crawling, traditional JRPG battle system I’m used to playing in these games Devil Survivor 2 utilizes a grid-based map that allows you a little more strategy than we’ve been allowed previously. Converging on enemies, keeping your allies safe and using smart formations is as key here as the spell casting, demon summoning, number crunching fights. Once you get to an enemy things become more traditional, allowing you to beat up on demons alongside your own cast of allied spirits. All in all it makes it one of the more in depth battle systems I’ve seen in the series, and I really began to dug it once the game began really challenging me and I started to understand its complexities. 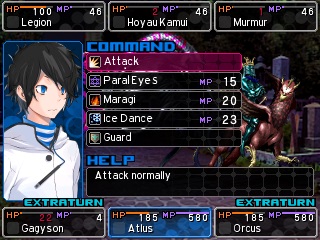 During the course of your adventure your party can form bonds with demons and utilize them and their powers in battle. Megaten games have always focused on this element, allowing you to level up and essentially evolve a whole squadron of yokai, spirits and fairytale ghouls. This ever expanding library seemed endless as I made my way through the typically giant RPG, and it’s an addictive system that lends Devil Survivor 2 its unique flavour.