Jedi Fallen Order is Dark Souls for people that like the idea but find it frustrating. Which is not to say it’s an easy game, but one that takes inspiration well from several sources and creates a game which is mostly better than the sum of its parts.

Respawn Entertainment – the creators of Call of Duty and Titanfall, plus the Star Wars license… can this be anything other than a complete winner?

Those of you expecting a big wall of scrolling text paired with John William’s iconic score to kick things off will be disappointed though. It’s a low-key introduction as you’re introduced to Cal Kestis, who has been hiding in an Imperial Backwater with the Jedi Order crushed. The game is set between Episodes 3 & 4, but most of the imagery will be more familiar from the original movies rather than the prequels. The story is remarkably well developed, and whilst Cal is never the most original or interesting protagonist (you can’t nor are ever really tempted to go to the Dark Side), the supporting cast are excellent, particularly your crew-mates Gris, who is surprisingly funny, and Cere, who has a surprisingly nuanced back-story. 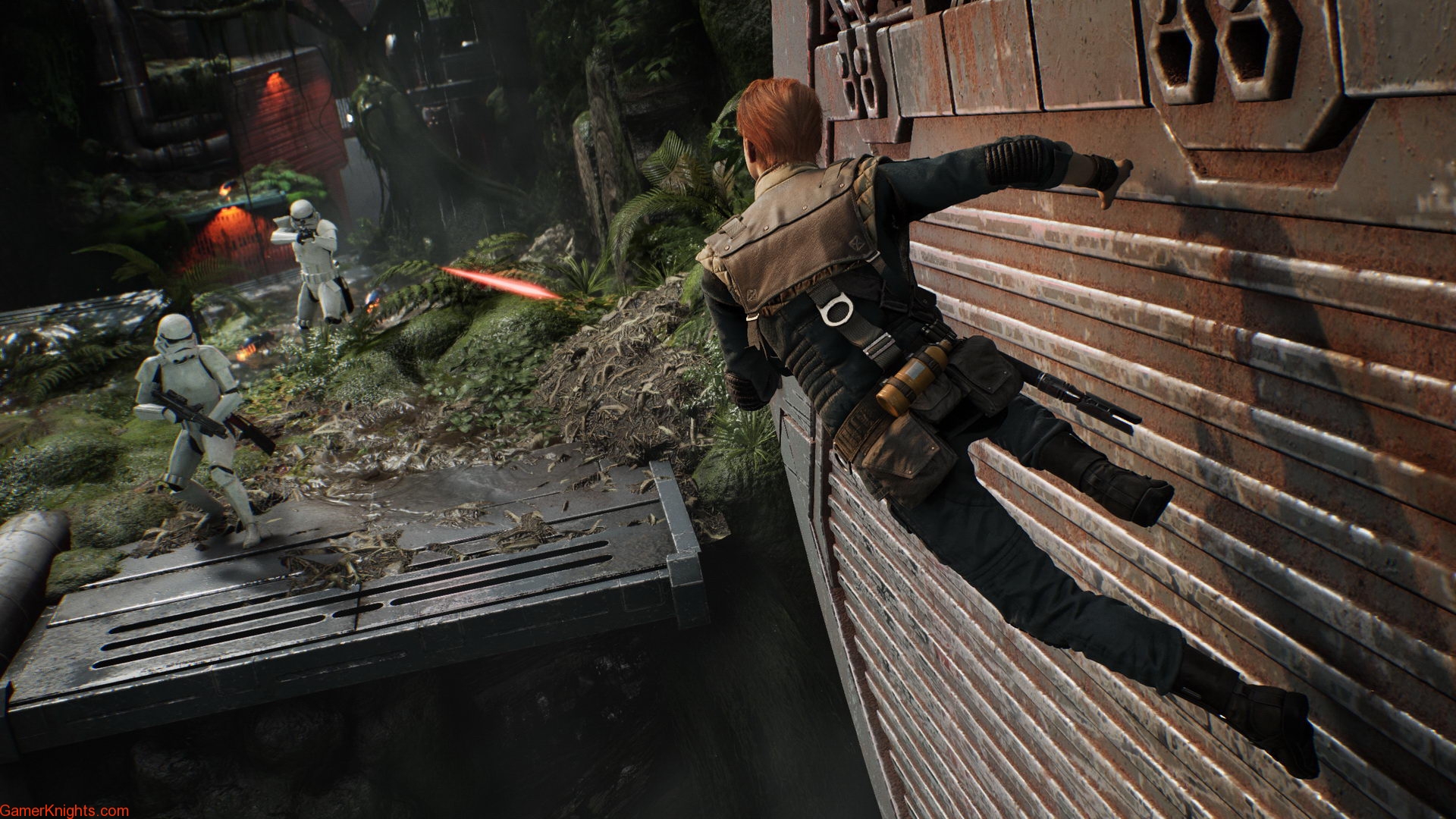 Trailers originally showed the game as looking a bit like a futuristic, dystopian Uncharted, and there certainly are elements which take after Nathan Drake’s games. There’s the sweeping vistas, impressive set pieces and light climbing and platforming interspersed with combat.

But the game also takes a leaf out of the Metroidvania book too. Initially the planets (levels) look fairly compact, but it becomes very clear that actually quite large sections are blocked off by skills and abilities that you don’t yet have, whilst other areas are protected by large boss creatures you’ll be too weak to see off. So you’ll spend plenty of time backtracking as you go. Thankfully the mini-map is fantastic, with very clear colour coding of places you’ll need to revisit later in the game.

Then you have the combat, which is very much Dark Souls based. You’ll need to time your attacks, learn to parry and dodge, especially unblockable attacks. Almost every enemy other than the most basic stormtroopers will pose a threat, especially in numbers, and require skill to defeat. The game is a clear level down in difficulty from the Souls series, but button mashing will get you nowhere. This is certainly not a Star Wars Dynasty Warriors. For the most part this works pretty well – the story gives you some reasons for not using a blaster. The main downside is that the Star Wars lightsabre power fantasy doesn’t quite work. You can’t use your incredibly powerful laser sword to open doors, and most enemies will take numerous hits to defeat, making it feel like Cal’s lightsabre has been set to stun. 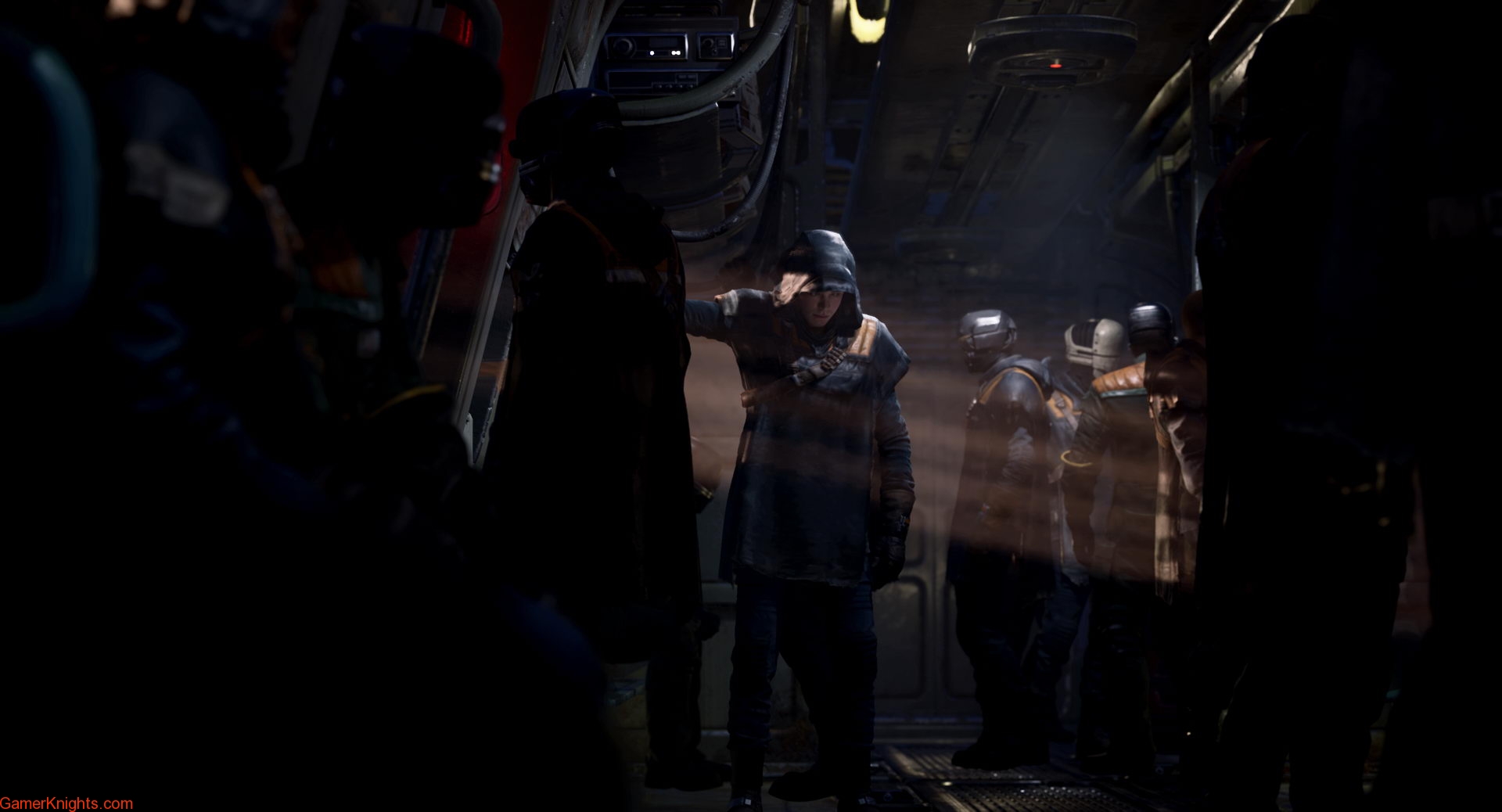 There’s plenty of different planets to explore, loads of different abilities to unlock, and even a gameplay bonus to finding the audio and text logs as they will grant you experience too. It’s not the longest game in the world, but most people will need a good 20 hours or so to see the end credits, which I think is fair enough given the price. It should be noted that as you progress to the later planets, there is a noticeable drop in polish and certain bugs start to become more prevalent. Hopefully they can be fixed in patches before you reach them. It does feel a bit like certain areas were rushed to reach a deadline.

Fallen Order is a remarkable looking game on Xbox One X. It’s simply stunning to behold, from the way that wind and rain interacts with the environment, to the art and level design, which is both original but evocative of the Star Wars universe. Respawn have done a top-notch job here. Unfortunately, especially in some later areas, the performance can’t quite match the visuals. There is also some texture pop-in and hitching, as if the game can’t quite load assets at the speed which is needed. Thankfully, this rarely affects the gameplay, which would be particularly egregious in a game requiring a certain amount of timing. 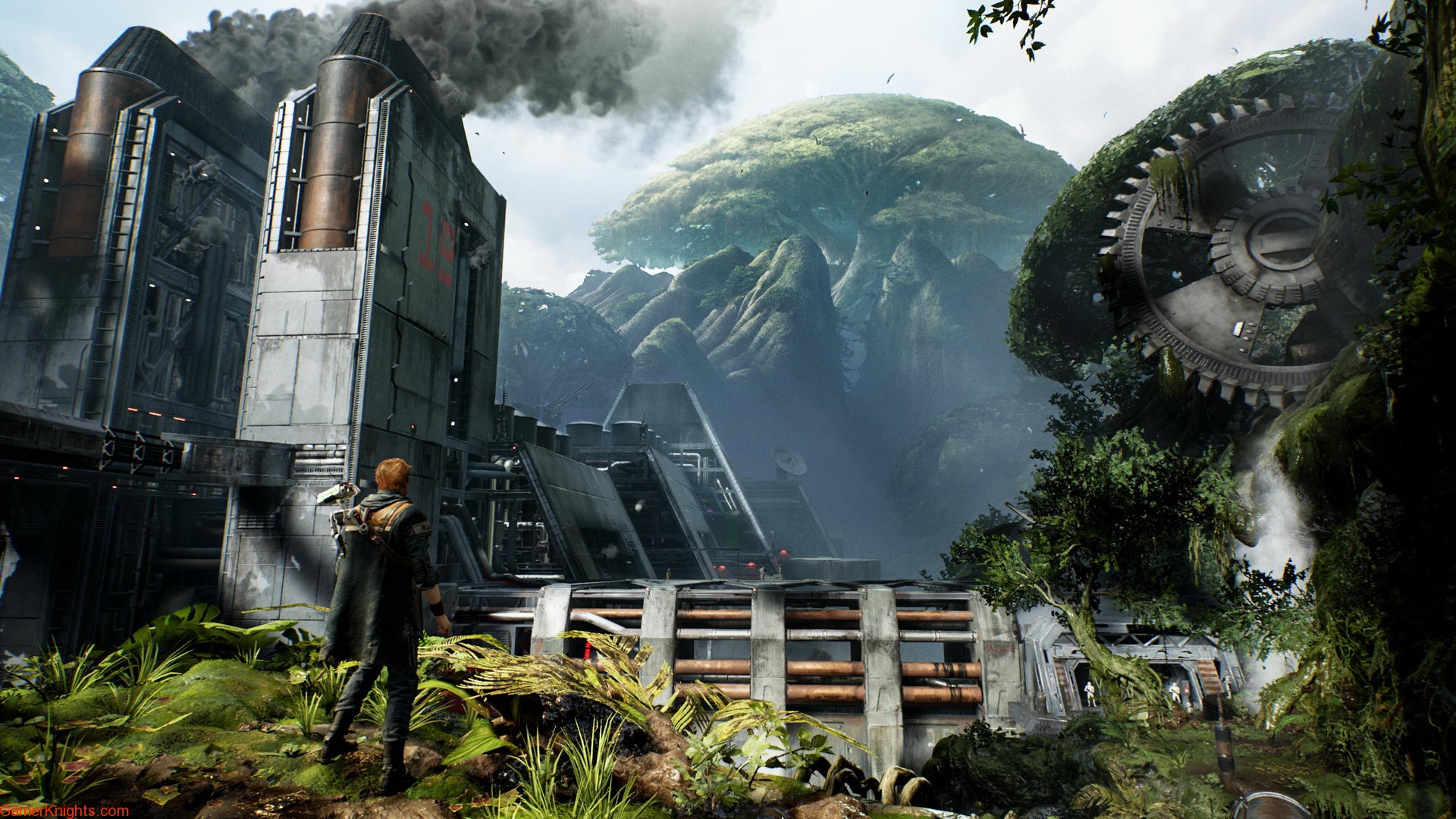 The audio is also surprisingly original, although clearly some classic tunes are used, and the voice acting performances are extremely good. Coupled with classic blaster and lightsabre effects, and you’ve got a game you want to be turning up on your surround system (P.S. it also supports 7.1 audio!).

“Star Wars Jedi: Fallen Order” is a very good game, but I get the feeling it should (and could) have been an exceptional one. Polish and performance starts to fall off in the later levels, and one gets the sense this was rushed out the door to meet the Christmas rush with the hope that it would be patched in time for Christmas day. How counter-productive that is, given the effect it has had on review scores, will I’m sure be an interesting quandary for EA executives as they ponder and present their next financial figures. Big business aside, Fallen Order is still a very good game and one which I would highly recommend, regardless of how much of a Dark Souls fan you may or may not be.