Super Bomberman R is a welcome return for our explosive group of misfits after far too long away from our TV sets, and I’m glad to say it doesn’t bomb.

Despite what some might say, I think Nintendo Switch’s launch lineup has been pretty brilliant, and I think Super Bomberman R has a vital role in rounding out what is already a pretty diverse library. Whilst 1, 2, Switch catered to a more casual multiplayer audience, Bomberman R fills that role for a more core gaming crowd, with a familiar face and very familiar gameplay easing us all into this new generation of Nintendo hardware.

But does Bomberman R fulfil its role as a hectic, hilarious multiplayer game with a bang, or a sizzle? Read on to find out.

Bomberman R offers a fully fledged campaign mode (though it’s appropriately listed below the main attraction on the main menu, the game’s multiplayer suite). Whilst many might assume this is a tacked on mode to validate its higher-than-usual price point (it’s being sold as a £50 retail game whilst previous iterations have launched for a lot less), I was surprised to find a funny little story, fully voiced, adorable animated cutscenes, and even boss fights to split up the level-to-level classic Bomberman action.

Basically, the Bomberman Bros. are taking things way too easy when Emporer Bugglar, a somewhat generic supervillain, takes over a handful of planets and sets up a load of maze-like stages for you to blow your way through. Whilst the story is about as standard as you can get, I liked how these cute cutscenes bookended the game’s chapters and fleshed out the colourful cast. I now pick Aqua as my multiplayer avatar, not because I particularly like the colour (really the only reason you’d pick specific character before) but because she’s so badass in the game’s campaign. It’s a throwaway addition that wasn’t needed at all, but I’ve been pleasantly surprised by its inclusion. 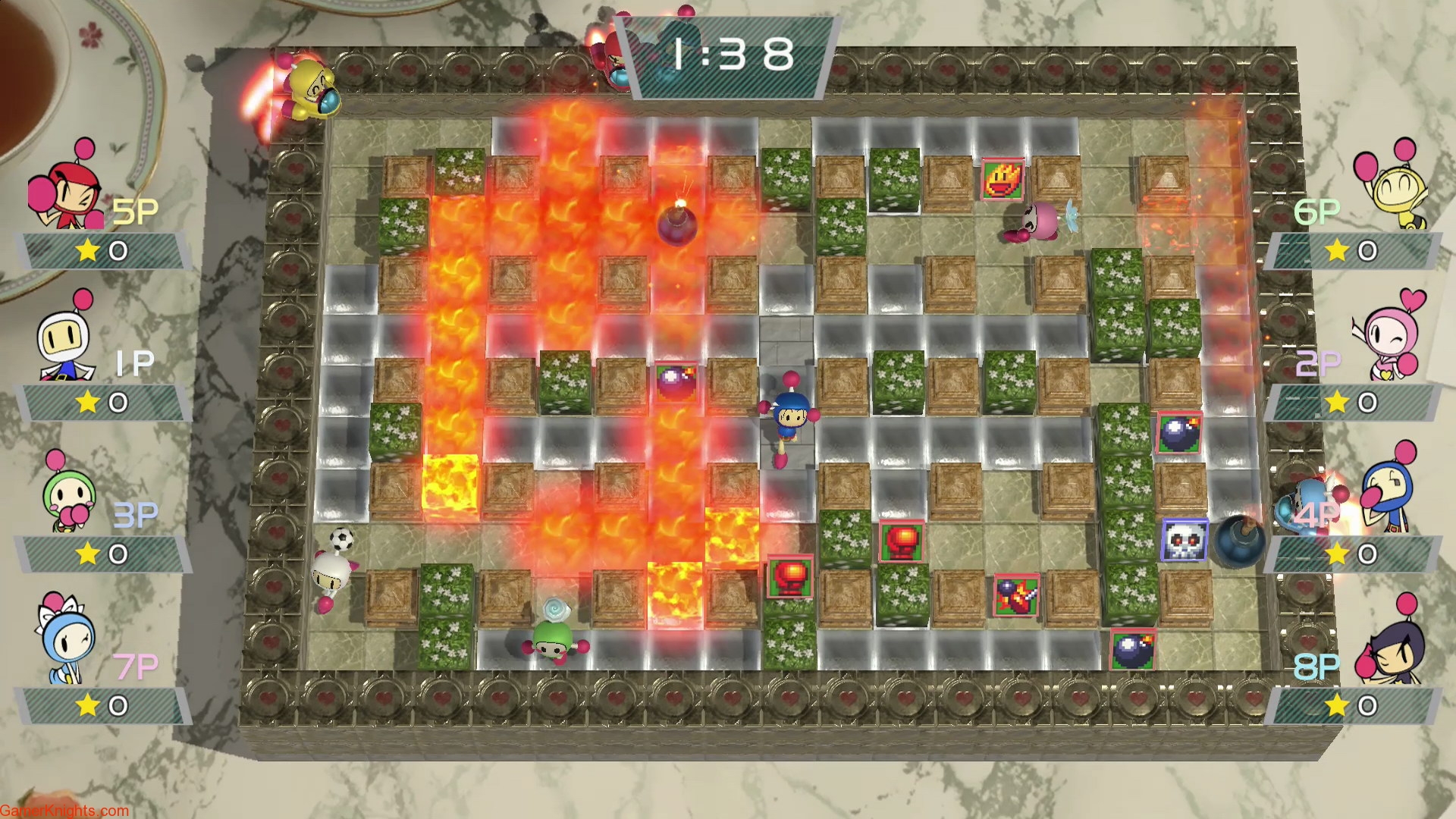 Honestly, I think I could say “It’s Bomberman’ and everyone who’s played any of Konami’s flagship series would know exactly what to expect going into Super Bomberman R. At this point it would be sacrilege – and needless sacrilege – to mess with Bomberman’s timeless formula, so luckily Konami doesn’t. You control a little bomber-dude (or dudette) navigating a grid-like maze trying to murder your bomber-siblings. These mazes are made up of a pattern of destructible and non-destructible blocks, so whilst you’ll start each battle locked into a corner of the map, with careful bomb placement you’ll uncover more and more of the battlefield until you can attempt to kill your foes with bomb blasts (before they do the same to you) 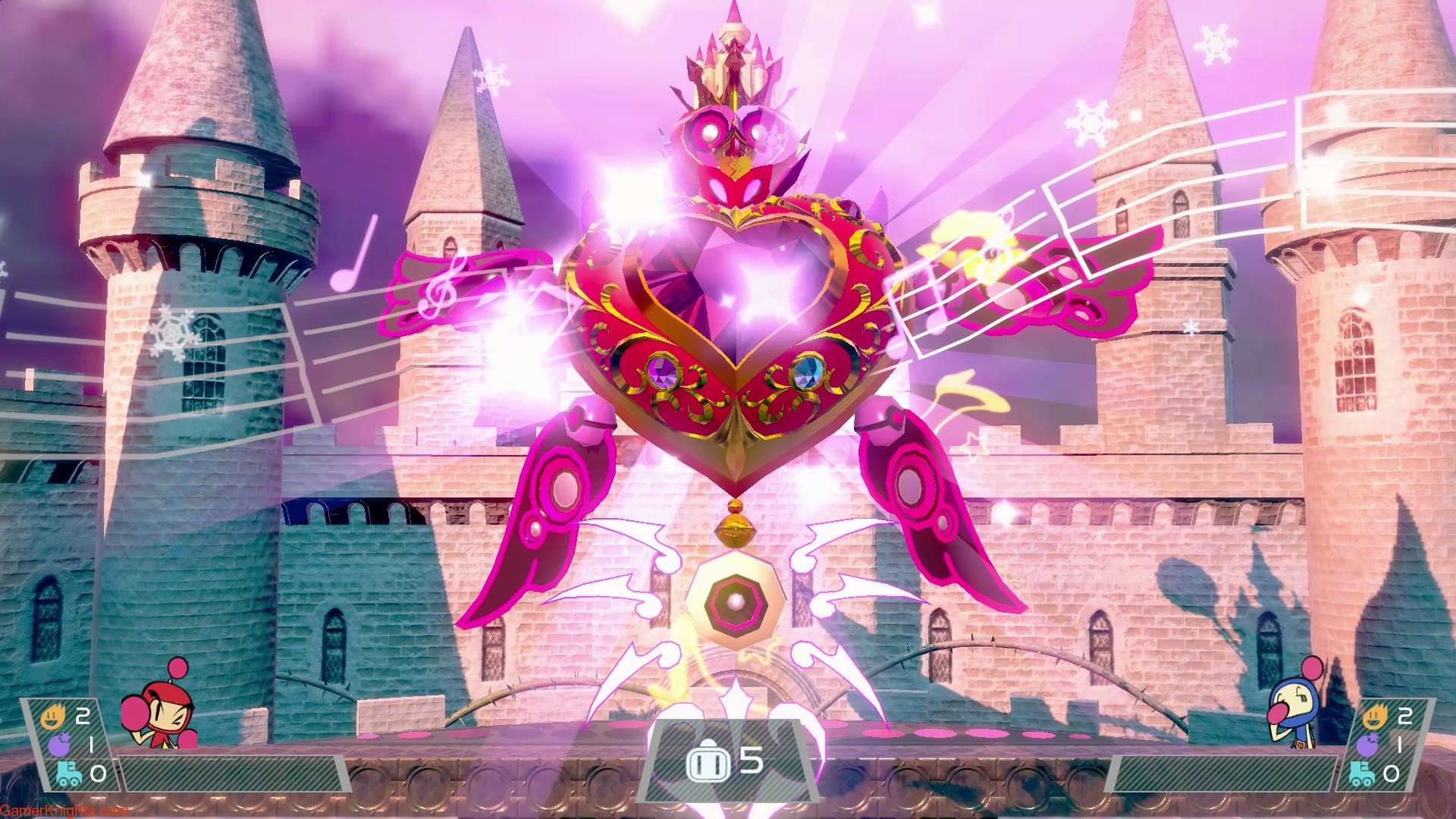 It’s simple, and no less brilliant than when Bomberman invented the formula all those decades ago. Different power ups found in rocks allow you to move faster, lay more bombs at once or make your omni-directional infernos travel further, amongst other things, and there’s just enough tactical depth to ensure that whilst Bomberman is easy to pick up, its hard to put down.

It’s only in the campaign’s boss fights that things are really mixed up. You’ll often find yourself freed from the four-directional limitations of Bomberman classic, in big arenas where you’re tasked with darting around gargantuan bosses, finding their weakpoints and smartly pinpointing them with a barrage of bombs. It’s surprising just how much this new found freedom shakes things up in the campaign, and it’s a welcome change of pace between the rest of the mode’s classic gameplay.