With the exception of appallingly broken online multiplayer, Team Sonic Racing is a well-crafted Kart racer. It could do with using the license better and some more interesting weapons, but the surprisingly good story mode and customisation options are real positives.

Mario Kart may be the undisputed king of the genre, but that’s not to say that other kart games can’t emulate the style competently or even do their own thing; and Sumo Digital have definitely gone for the latter approach with their latest Sonic racer, “Team Sonic Racing“. Does it work?

Interestingly enough, the game has a fully-fledged story mode, with 7 different chapters to complete, and numerous optional objectives in each level, as well as bonus levels that need to be unlocked using keys, which are again obtained by completing race objectives.

Some of these bonus levels are really tough, and with a number of achievements and unlocks based on beating them (as well as 3 difficulty levels), provides for a good variety and fairly lengthy campaign. 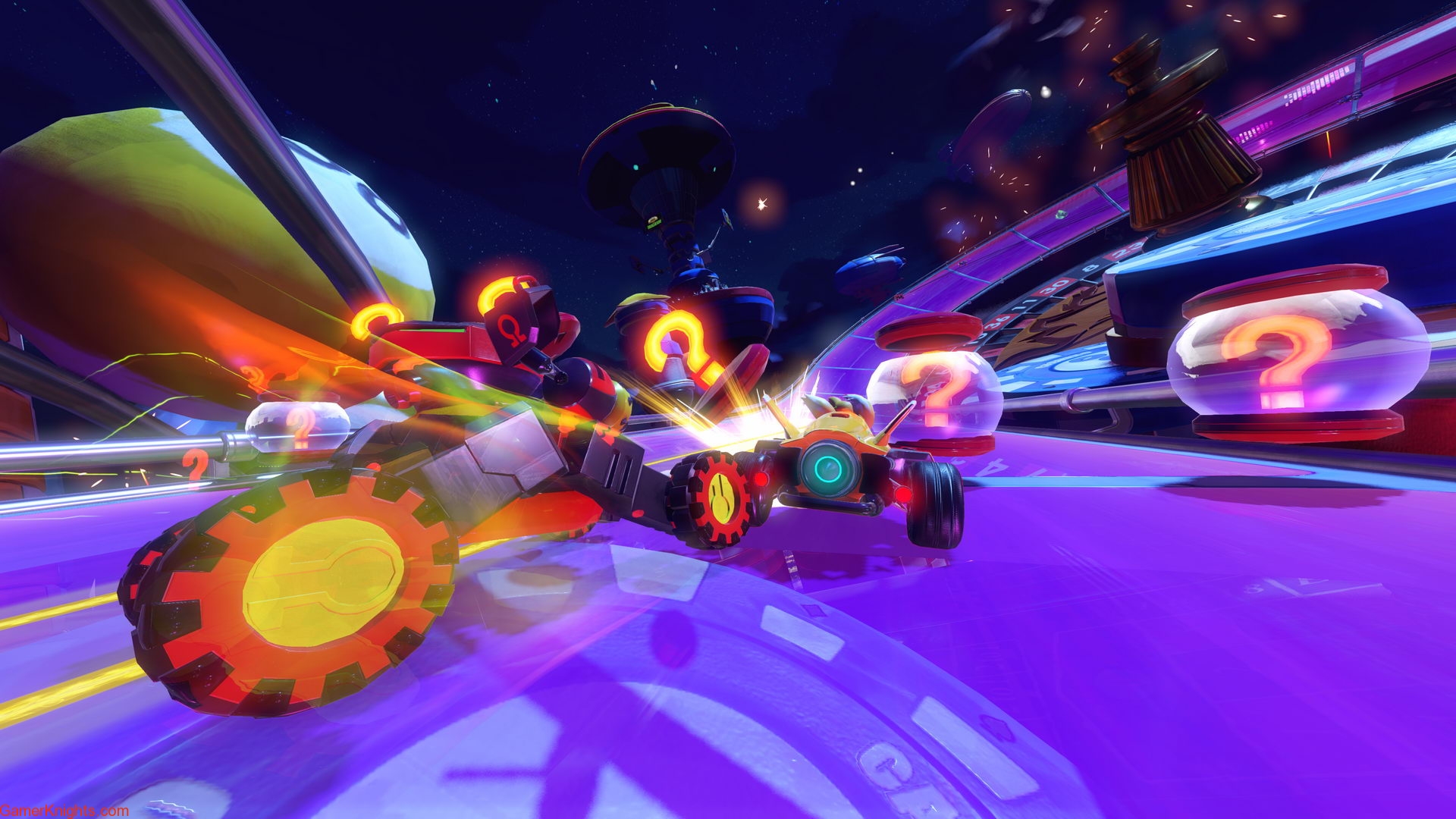 Many of the levels also have different victory criteria other than just winning races, so also add value from a gameplay perspective too. But, on top of that, the actual narrative is surprisingly decent too. Dodon Pa, an alien tanuki, builds everyone cars and challenges Sonic and friends to race, before Dr Eggman/ Robotnik comes in to try and nick everything to use the engines for his nefarious means…

The gameplay looks, at first, very much like a standard kart racer. You can get a boost start, controlling your drifts is key to getting in good laps, rings help you go faster, and there’s a standard array of weapon boxes and weapons to use against your opponents. However, the team-based element of the game makes things significantly more interesting, even if the standard controls do happen to be excellent. It’s crucial to work with your team. You can send or receive weapons to/from them, whilst following behind one of them will give you a speed boost if you can draft in the yellow trail that they leave. 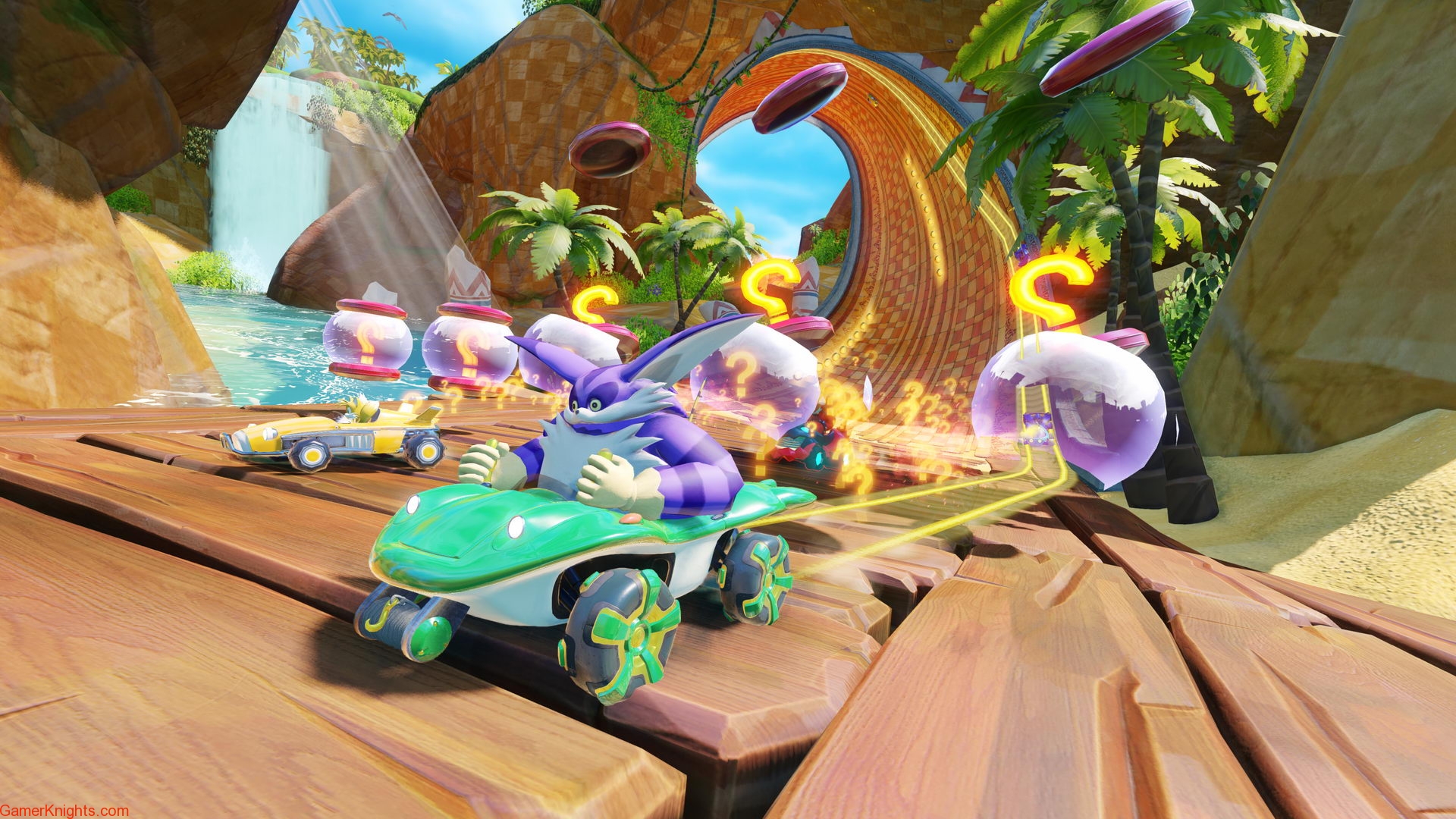 If you have an accident, then a ‘skim boost’ from a colleague will bring you right back up to speed. Working together efficiently will also help unlock your team ultimate skill, which brings with it a speed boost and invincibility. You also get ranked in races based on your team finishing positions, so it’s no use being in first and letting your AI teammates bring up the rear.

In the adventure mode, the teams are fixed, and are based around Speed, Power or Technique, each of which has its own set of advantages to choose from. Being a pure Sonic game, this does limit the characters somewhat, and whilst there’s 15 based across 5 teams, even that number feels like it’s scraping the bottom of the barrel. Thankfully, there are really excellent customisation options. There are loot boxes, but you can’t spend real-world currency, the coins come plentifully, and you never seem to get duplicates.

These upgrades are well worth getting as they offer performance boosts (or trade-offs) as well as having a cosmetic impact. There are also limited use ‘boost boxes’ which can give you bonuses like a maximum start-line boost or other in-race advantages. The AI is excellent, and the racing feels good. And with 21 tracks, there’s also plenty of variety. It’s just a shame that the weapons aren’t interesting or powerful enough. Many of the standard items don’t have any homing ability, and feel like they are placed just to get you to swap them back and forth between your team to build up your ultimate meter, rather than to actually be used on the offensive. 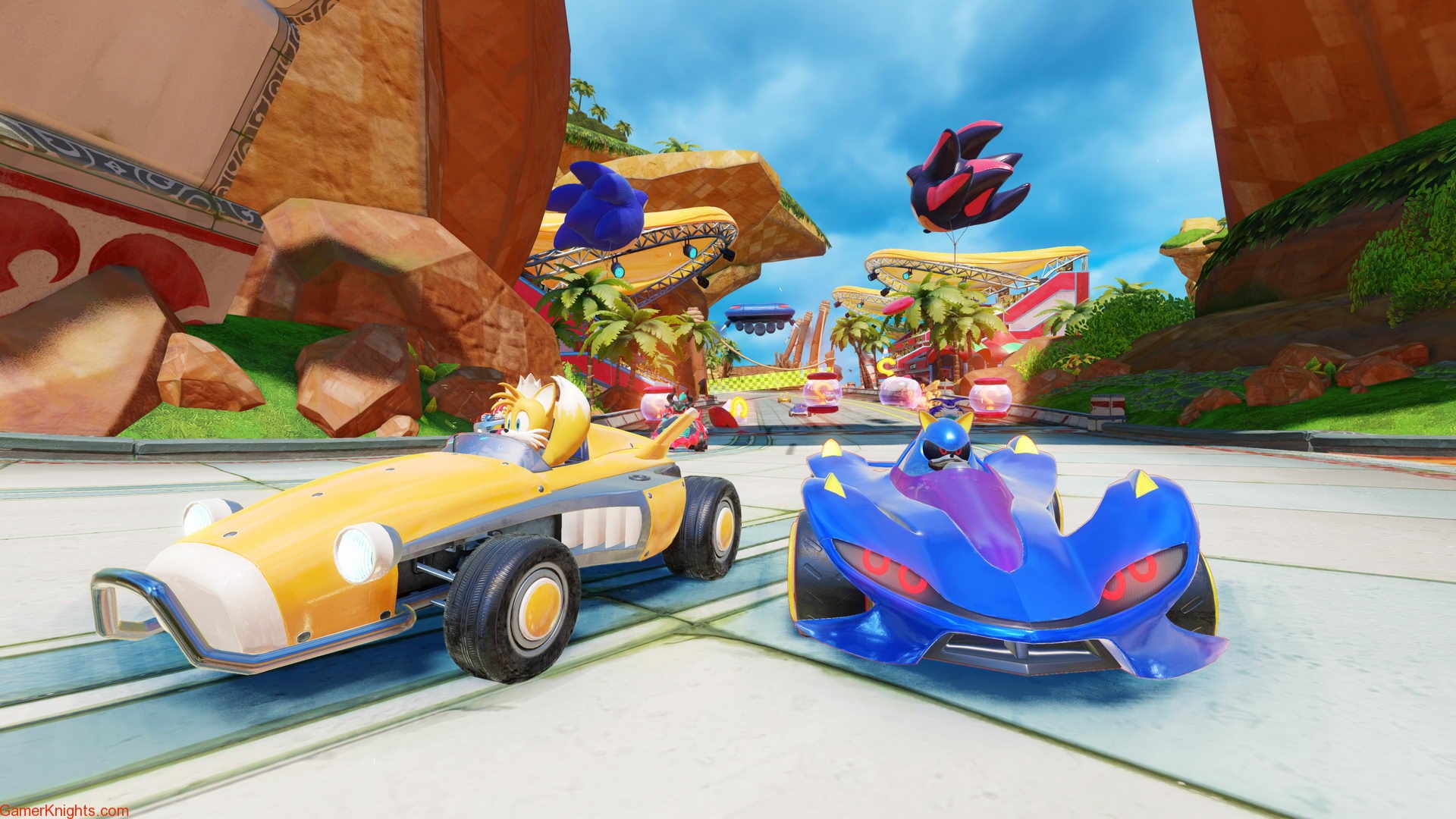 Oh dear. I had an absolutely torrid time trying to play TSR, from slow matchmaking to actual system and game crashes. I also had a number of host disconnect errors and over the course of a couple of hours over a couple of days only managed to play a single online game, which was hugely disappointing. Thankfully split-screen works should you be desperate to play against other humans.

Big, bright and colourful, with zany rock music in the background, TSR certainly makes a good first impression. The levels are really well designed, but you do quite quickly come to realise that they feel quite bespoke. It never really feels like you’re playing a Sonic game in the same way a Mario Kart does. The Karts themselves are thankfully more thematically appropriate. On Xbox One X, the game runs at a smooth 60fps at 4k, and looks excellent with the really refreshingly light colour palette. 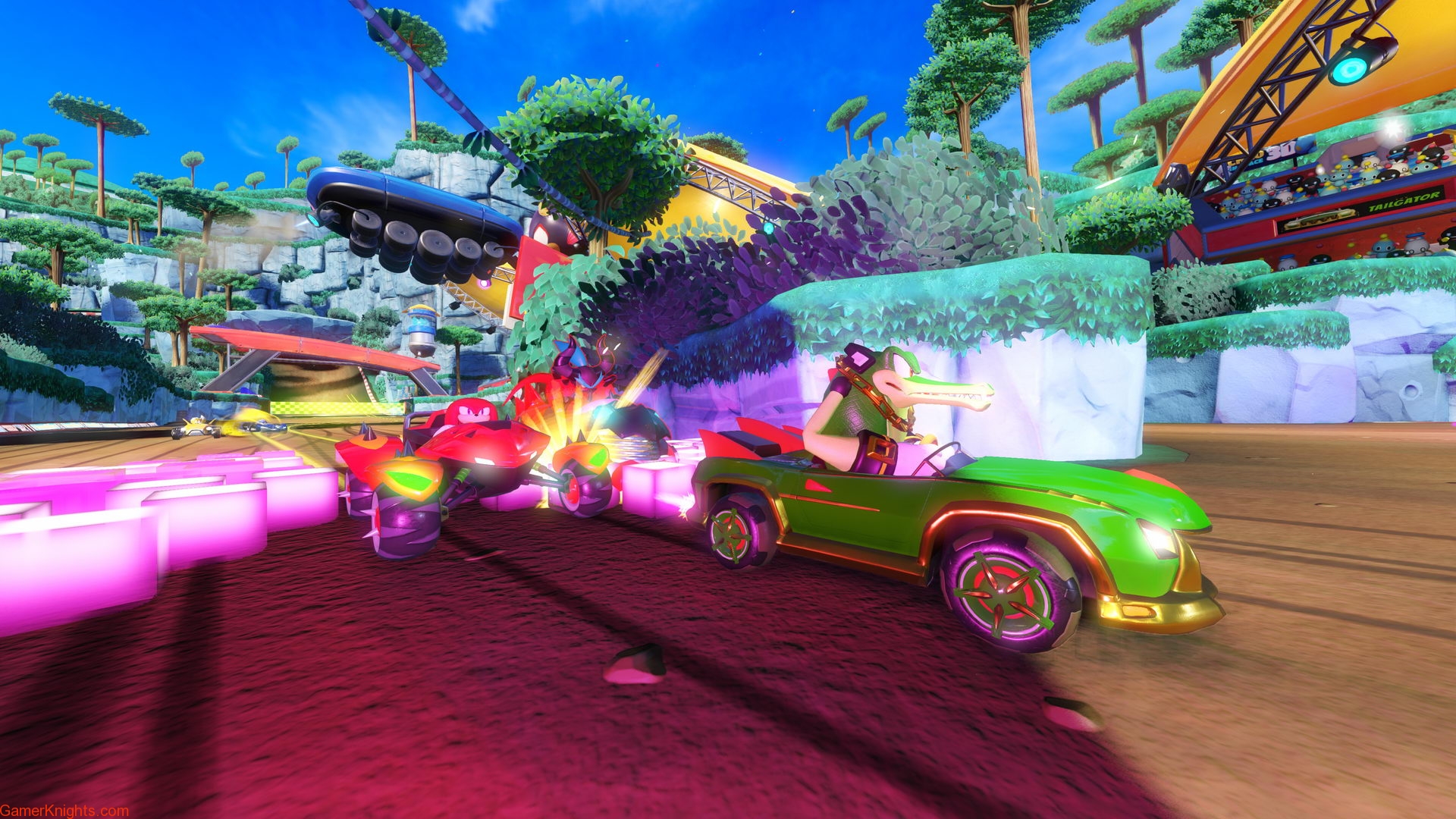 The music is pretty hilarious (in a good way), but unfortunately the voice acting is funny in a bad way. The various cut-scenes and mid-race exclamations are all universally terrible.

“Team Sonic racing” has some real highs – a genuinely interesting story mode, the team mechanics and vehicle customisation all stand out. But bland weapons and shocking online play do impact things (most especially the former because they are unlikely to be fixed, unlike net-code). If you don’t own a Nintendo system and don’t have access to Mario Kart, then you won’t find a better arcade racer in an increasingly threadbare market. But if you do have a Switch, I’d probably pick up the MK8 over this on balance.