It’s been fifteen years since we first saw Termina crushed beneath the moon, and the sight still sends shivers down my spine.

When I first wandered into Termina for the first time fifteen years ago, I did so alone. It was around 2000 that a lot of my friends and family fell out of love with gaming. People who had been with me through previous Zelda titles were suddenly missing; ignorant or uncaring that Link had a new adventure to explore, a new kingdom to save. As such I’ve got incredibly bittersweet memories of Majora’s Mask. I strangely felt very adult, attempting to save the world whilst those around me didn’t just chose not to, but failed to even care that I was.  It was a strangely fitting moment, as Majora’s Mask is a haunting and incredibly solitary game. People forget Link all the time in the game, he has to reintroduce himself over and over again, and when he commits some feat of heroism, no one cares the next day. No one remembers. Majora’s Mask is at once beautiful and crushing in its loneliness, and its legacy will live on forever thanks to that.

The Legend of Zelda: Majora’s Mask is a heck of a tale, and stands to this day as Nintendo’s best. Majora’s Mask starts out with Link getting robbed in the forest by the Skull Kid donning a strange mask, losing his ocarina and trusty steed Epona to him. Giving chase, Link stumbles in to some alternate reality, finding himself in a warped version of Hyrule called Termina. It’s peopled with familiar faces from Ocarina of Time, but these characters are alien versions of themselves. They don’t know Link and they often act very differently to their Hyrule counterparts. Aside from that, the moon hangs dangerously low in the sky, threatening to crush Clock Town in three days. 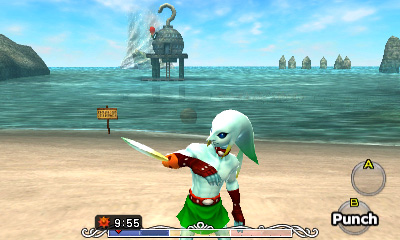 Quickly this tale devolves into a dark version of Groundhog Day – an ever repeating set of events where Link must sort out what’s going on in Termina, how to stop the world from ending and put an stop to the Skull Kid.

The storytelling in Majora’s Mask is unparalleled by Nintendo to this day. It’s the darkest and most mature game they’ve written to date, with countless story threads – each as melancholy as the last – expertly woven throughout the three day storyline. Intersecting and evolving beautifully as Link works his way through the world, these story beats show Termina’s humanity at its best and worst, at its lowest and most desperate, and at its most heroic and sacrificial. Faced with impending doom, it’s incredible to watch these characters we’ve come to know react completely differently to one another. Some choose to run, some balk at the moon, and others simply hold each other until they’re gone. It’s chilling stuff.

To stop the moon from falling, Link must enlist the help of giants from all four corners of the world. This is done in part with standard Zelda adventuring; gaining new abilities and items, fighting bosses and clearing dungeons. But this is actually the minority of the gameplay on offer with Majora’s Mask 3D. There are loads of sidequests in MM, focused on helping out the various denizens of Termina by doing anything you can to help them. This includes stories as varied as protecting a ranch from aliens and reuniting lost loves. These stories have a keen eye for the bonds people have with one another, and they’re beautiful little stories to partake in, with outcomes that are just as rewarding narratively as they are with items and progress. 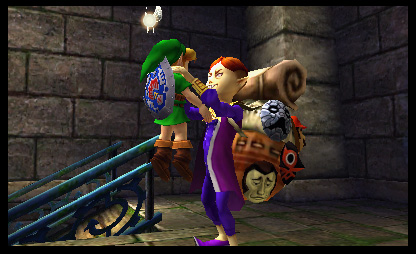 All these threads can be kept track of in your Bomber’s Notebook, a log book that helps you keep up with all the important events of Clock Town and its outlying areas. The notebook has been seriously beefed up for this new version, making sure it’s even easier to keep track of what you’re supposed to do next or who you have yet to help.

Very often these quests and dungeons reward Link with masks, a focus that is wholly unique in Majora’s Mask. The idea was dabbled with briefly in Ocarina of Time, with different masks getting different responses from certain NPCs, but here the masks are invaluable to nearly all progression. Some even transform Link into a different being altogether, and it’s here that Majora’s Mask gains its completely fresh take on the Zelda formula. Collecting all the masks in the game quickly becomes a really exciting goal that most players won’t be able to resist chasing down.

There are some really vital updates to Majora’s Mask in the new 3DS version. Saving is easier and progress isn’t as easy to lose as it used to be. Everything here has been streamlined to help the player focus on what’s important; Majora’s brilliant storytelling and its unique gameplay. It’s hard to spot all the differences and updates on display here as Nintendo have taken a brave, critical eye to all aspects of this fan favourite. It’s good to know that Nintendo aren’t willing to rest on their laurels here, with a remake that is truly worthy of every gamer’s time. 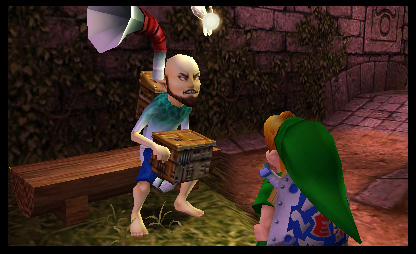 It’s not just the gameplay that’s benefitted from fifteen years of experience, either. Majora’s Mask looks beautiful on the Nintendo 3DS, with its vibrant colour palette and out-there design really coming to life on the handheld. Termina in 3D is a sight to behold, and is more than just a resolution bump. Everything’s been redesigned from the ground up, and with this new coat of paint Majora’s Mask could easily pass as a brand new game to the uninitiated.

The soundtrack is also one of Nintendo’s best, with their most interesting audio experiments happening exclusively in Majora’s Mask. That’s not to say that the traditional stable of Zelda tunes isn’t here in full force, but everything is remixed with that strange, other-worldly filter. You really have to hear what Nintendo have done to some of the music we’ve been listening to for nearly three decades. It adds an unsettling creepiness to every facet of the game, and the atmosphere wouldn’t be the same without this spot-on score.

The Legend of Zelda: Majora’s Mask sees Link enter an alternate dimension. It’s Hyrule but not as we know it, flipped on its head and filled with people we recognize but don’t know. It’s a direct representation of the world post-Ocarina-of-Time. The public desperately wanted something as amazing as that first 3D Zelda, more of the same, but completely different. That’s exactly what Nintendo delivered. Since Majora’s Mask launched in 2000, most 3D Zelda titles have followed that overly familiar formula Ocarina of Time laid out, but MM stands as a truly unique entry in a storied series. It may not be the best Zelda ever made, but it’s still my favourite. This reworked version just perfects what was already impeccable game design. Anyone who owns a 3DS owes it to themselves to buy this masterclass in game-making.