Probably aimed for only the friends of two wheels.

It has been two years since the release of TT Isle of Man: Ride on the Edge , (review) a special title which in turn was based on a very special institution. And despite the many negative comments, BigBen decided on a sequel. Whether this move can be described as correct, we will try to analyze in the following lines, although the only sure thing is that brave steps have been taken forward. Ride on the Edge 2 appears more mature, rich but at the same time just as ugly and difficult with its predecessor, so it is obvious that it is again aimed at a specific and rather quite limited audience.

The transition to the main menu is done in the most awkward way, without the slightest introductory video and this is a first, small thorn in the racing tires of the player’s motorcycle. The very institution of TT Isle of Man can be characterized at least as impressive but also eerie, where racing motorcycles of high displacement pass through urban environments with astronomical speeds, providing a multitude of photographic and television material. 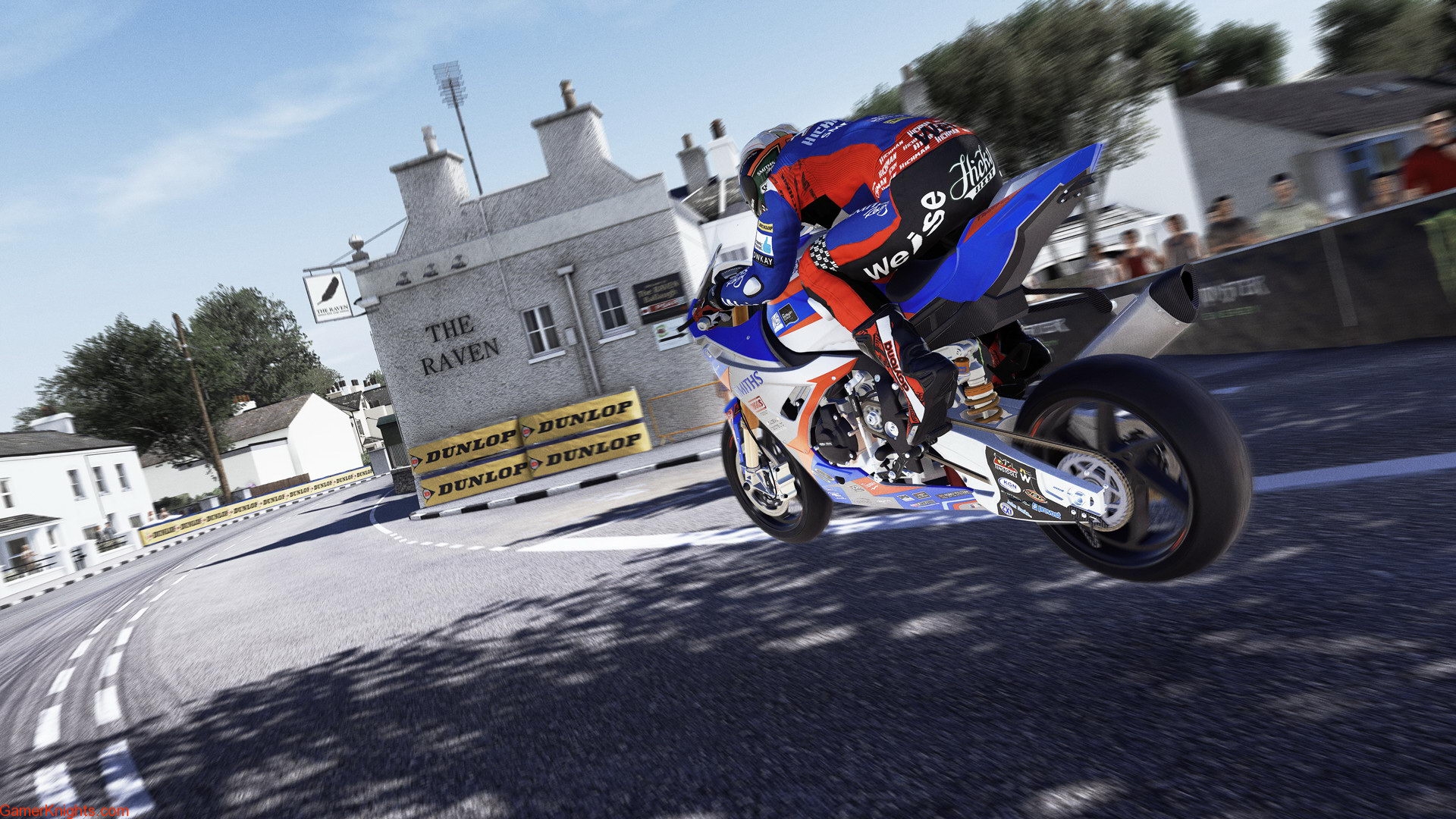 Despite the fact that the company has secured the exclusive rights, it avoids using the aforementioned material, and thus is limited to a few static images, which are “wasted” in unbearable loading times. At the very least, the main menu is quite beautiful, simple and clear, and now everything is organized and clearly enriched. A noticeable difference compared to the past is the career mode, which if one excludes the fact that everything is impersonal, the most complete racing diary will spread smiles to the friends of the two wheels. The player, after passing the indifferent tutorial, will be graded according to his performance. The title will automatically direct him to the category he has to run based on his performance, although of course the player can make the decisions he wants.

The career mode, therefore, unfolds not only in the legendary route but in the whole island – which for those who are wondering is located between Ireland and the United Kingdom – as well as in coastal areas of the above two states. Depending on the performance of each, the corresponding events will be unlocked, only here attention is required. Usually 2 or even 3 matches are organized on the same day, so choosing one of them automatically excludes the other two. That way, it’s up to the player to decide whether to move in shallow water or dive deep. Because it is worth noting that, running in one event and moving on to the next, automatically all previous races are no longer available. And if you consider the number of tests – races, it is obvious that the career mode of TT Isle of Man:Ride on the Edge 2 is one of his very strong cards.

Of course, in order to have a balance, the races are divided into two categories: the Junior TT, where motorcycles up to 600cc participate, and the main TT with a limit of 1000cc. As in reality, factory teams are supposed to not exist, although everyone knows that in one way or another they have a discreet presence. Those who have tried Ride on the Edge before will remember that the biggest problem was the level of difficulty, and sadly one finds that in the sequel the picture is unfortunately worse. Clearly, the nature of the sport is dangerous, as racing bikes are limited to country roads, but KT Racing has made some wrong decisions. 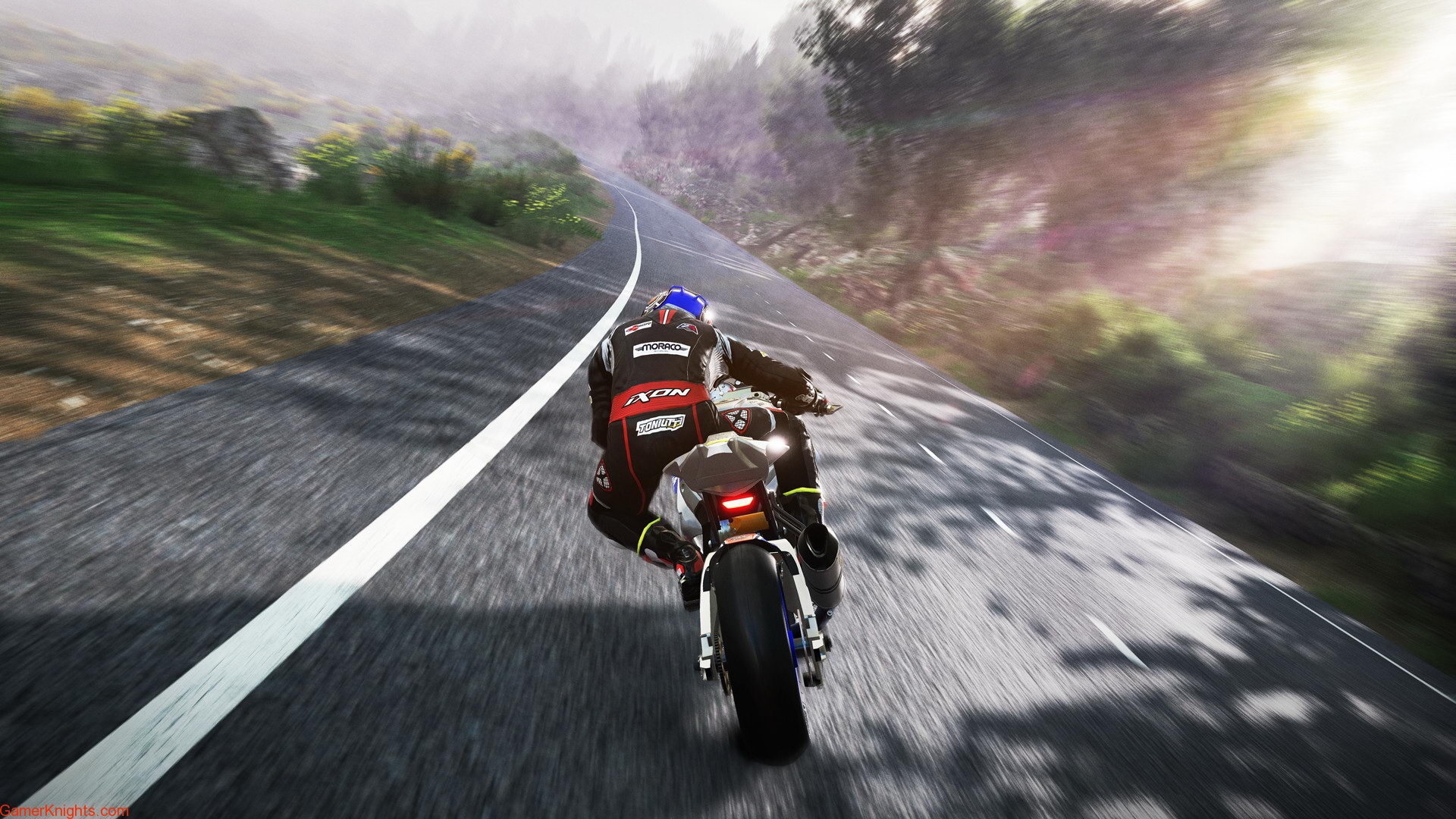 First of all, it is to her credit that she avoided a lot of driving assistance and presents a demanding handling model, borrowed from its predecessor, where bad language is said to have been “borrowed” from Milestone’s Moto GP 17. In practice, the player is the one who controls everything and it takes a lot of patience to get a motorcycle to acceptable racing levels. As is usually the case during career mode, the player will collect perks and credits, with the ultimate goal of improving the mechanical parts of his machine. This is the reason why they behave somewhat awkwardly at first.

With the corresponding improvements in the brakes as well as the suspension, the TT Isle of Man: Ride on the Edge 2 is beginning to show its virtues timidly, and despite the fact that the physics model is not one of the best, driving is quite enjoyable. Combining manual downloads with the push of the front brake is quite a laborious process, and despite the fact that the title is unable to move in perfectly simulation paths, in the end driving becomes quite enjoyable.

However, at this point the weakest point of the title is identified. By overcoming the “anemic” physics and keeping in mind that the player must be constantly focused to the fullest on an open path with a number of obstacles, in our opinion the absence of the rewind option is unacceptable. There are no sand traps or escape exits here, so one wrong move and the bike will be derailed by its course – for the rider’s animation no comment – and when it finally comes back, it will be far behind. Here it is necessary to make a parenthesis and emphasize that in the races of TT Isle of Man the absolute time counts and not the ranking position. There may be many motorcycles on the route, but only time will tell. Closing parenthesis and we continue. 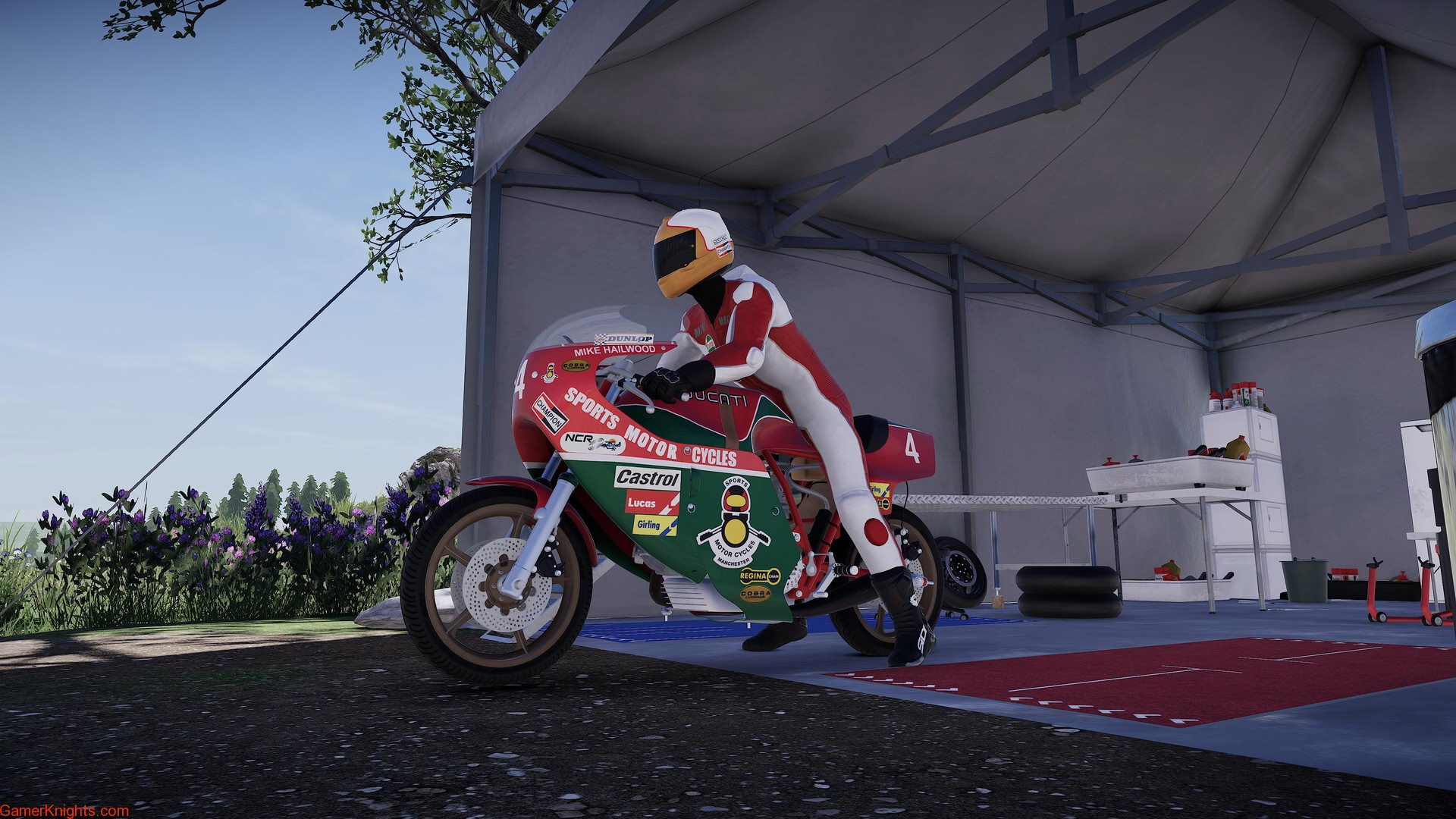 The respawn button is really useless, because once a rider falls down, the recovery process is specific, and the slightest contact with the environment cancels out simple rules of physics and unfortunately brings another downfall. It is obvious that the development team wanted to keep a style as serious as possible, but the proprietary graphics engine is several times that really exposes its otherwise ambitious effort. It is not permissible for a small bush to have the same effect as a solid object, or even for a pedestrian overcrowding to be catastrophic.

So, the only lifeline is the restart, followed by another extensive loading time. And if one considers that each event is quite long, the absence of rewind – which we have seen even in serious simulation sentences – we consider to be a wrong move. The pleasant thing is that the career mode has included the challenge section, something quite smart but just as demanding. Reminiscent of the Need for Speed ​​series, there will be several extra tests on the map, which in turn will bring even more credits to the user’s pocket. Here, too, the level of difficulty is almost … inhumane, but the nice thing is that TT Isle of Man: Ride on the Edge 2 offers a lot of trials, composing a fairly rich set.

If we wanted to single out something in this title, it would be his travels. The development team dared and really managed to design some of the most beautiful areas in a proposal that deals with two wheels, and so, in addition to the main route of the institution, there is really an entire island available for exploration. Traveling to the extreme on a narrow road by the sea with a beautiful sunset in the background is an image that is rarely found in a racing proposal and it is a pity that the aging graphics engine cannot perform as well as it should. 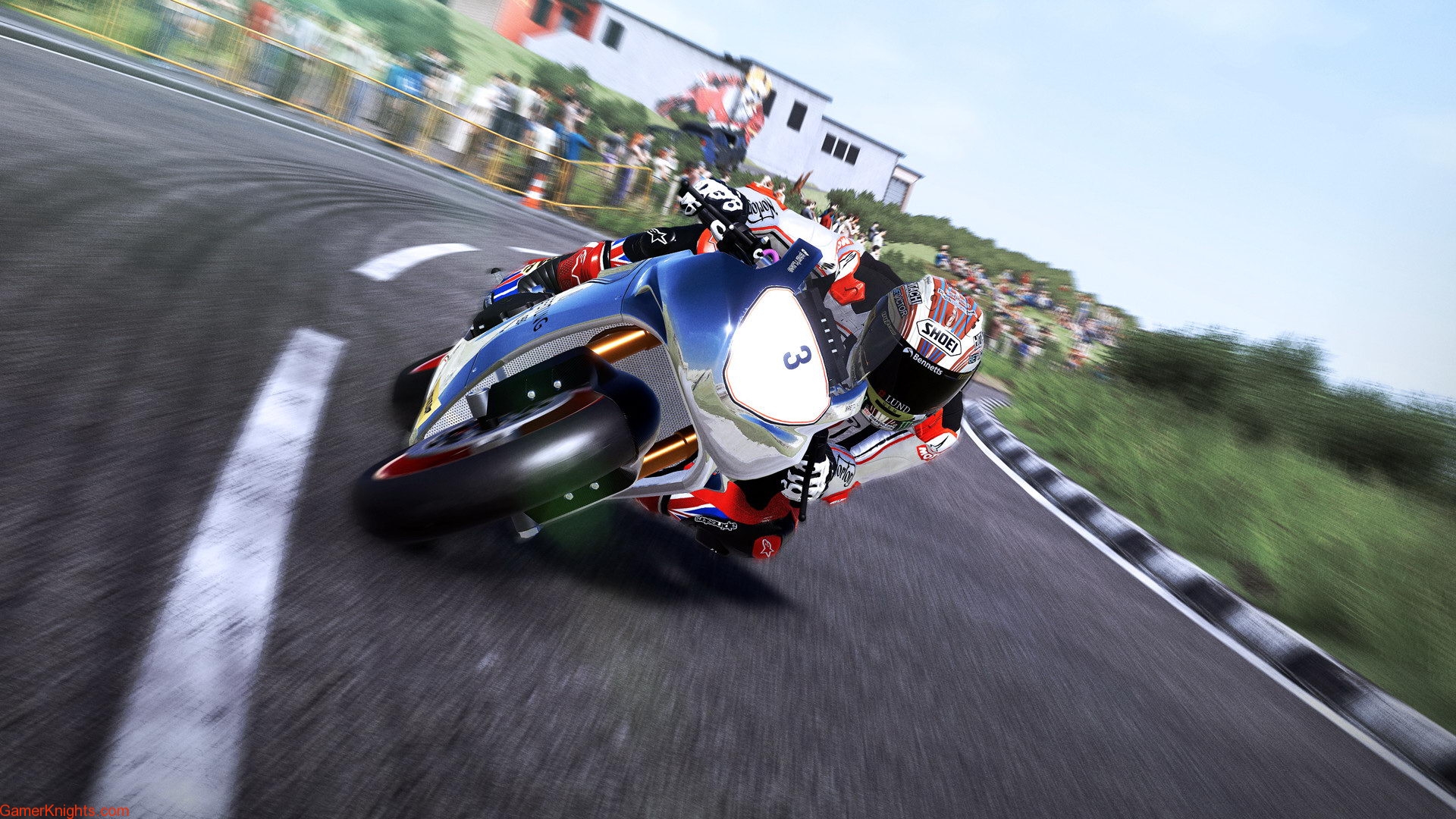 The technical problems are unfortunately many, composing a set that wrongs the consoles of the current generation, although the problem of the title is not so much that of aesthetics. In essence, what bothers me is the lack of harmony between the control model and the physics of the title, and this is evident when speeds drop enough after a brake or require quick movements. The rider’s shift on the bike is too slow, so it is impossible to pass through a series of closed turns. And thinking that we have in front of us an urban environment, with closed turns that in some cases exceed 90 degrees, realism has once again gone for a walk.

As in the past with its predecessor, TT Isle of Man: Ride on the Edge 2 is a special proposition. On the one hand, he dares to go one step further, but at the same time he cannot escape his shackles, which arise from some outdated decisions that have been made. It is one of the few times that the dividing line between racing pleasure and irritation is so blurred and it is a pity that under other circumstances the title would be a digital paradise for the friends of the two wheels.