Chaosbane is a surprisingly accomplished action RPG. The first few minutes aren’t very inspiring but quite quickly the skill system and combat start to come into their own and you realise this can stand amongst the best games in the genre proudly.

Bane of your life?

Warhammer games continue to come thick and fast, and perhaps the biggest surprise is that no-one has attempted a Diablo clone yet (as far as I can see, anyway). Does “Warhammer: Chaosbane” bring anything to the party or is this just hoping to lure in a few new fantasy fans?

Chaosbane is actually quite unusual, even amongst GW games in terms of the period it picks. Not only does it eschew the current “Age of Sigmar” setting, but also the previous era of Karl Franz, and goes back a further 200 years in the timeline to the age of Magnus the Pious and Teclis, the High Elf Loremaster.

For those of you just looking for loot, this will all probably be very dull! But for Warhammer fans, it’s nice to see another part of the lore and history of the Empire explored in a bit of detail. Unfortunately, after a fair bit of initial exposition, you don’t find out much that isn’t already in the lore, but it’s still a decent romp through one of my favourite fantasy universes. 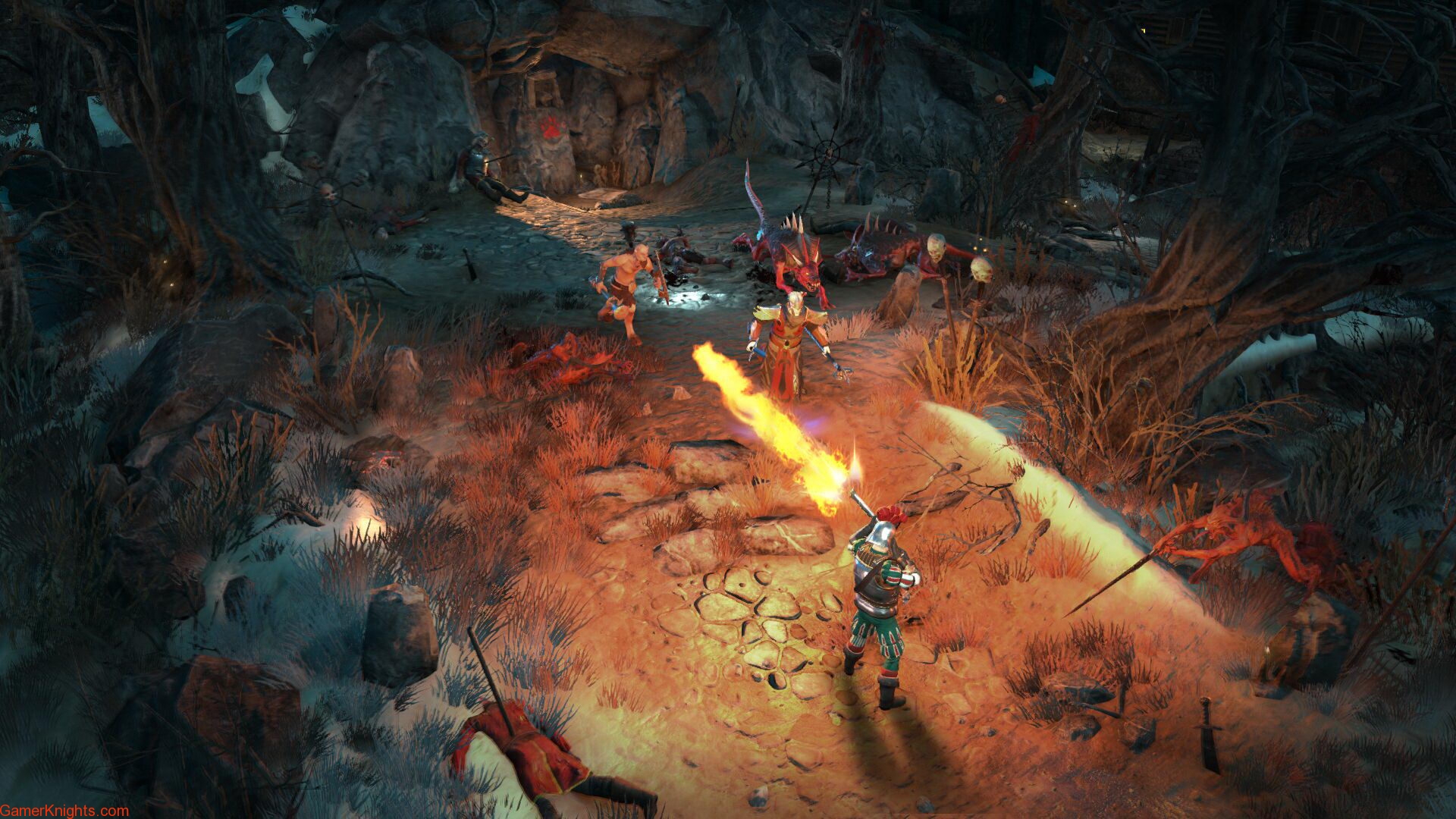 In the world of the action RPG, frankly, Diablo 3 is still king after 7 years or so. It will be interesting to see how much the oft-rumoured Diablo 4 brings the genre along. But whilst there have been some valiant efforts (Van Helsing is probably the closest for me), pretty much everyone else is competing for best of the rest; and there have also been some pretty shocking efforts out there as well.

Chaosbane doesn’t open well, and my heart sank. I started off as the High Elf spellcaster, and whilst it was nice to have a personalised intro to the story, the initial combat encounters were poor. You get a flame-bolt spell, which was difficult to aim well, didn’t go up or down stairs (of which there are a lot in the opening sewer encounters), and there were limited skills and loot. Thankfully I persevered, because the game doesn’t really open up and give you much real choice until you hit about level 10, a couple of hours into things. By that point, you’ll have come to realise that you’re character development requires a fair bit of balancing. 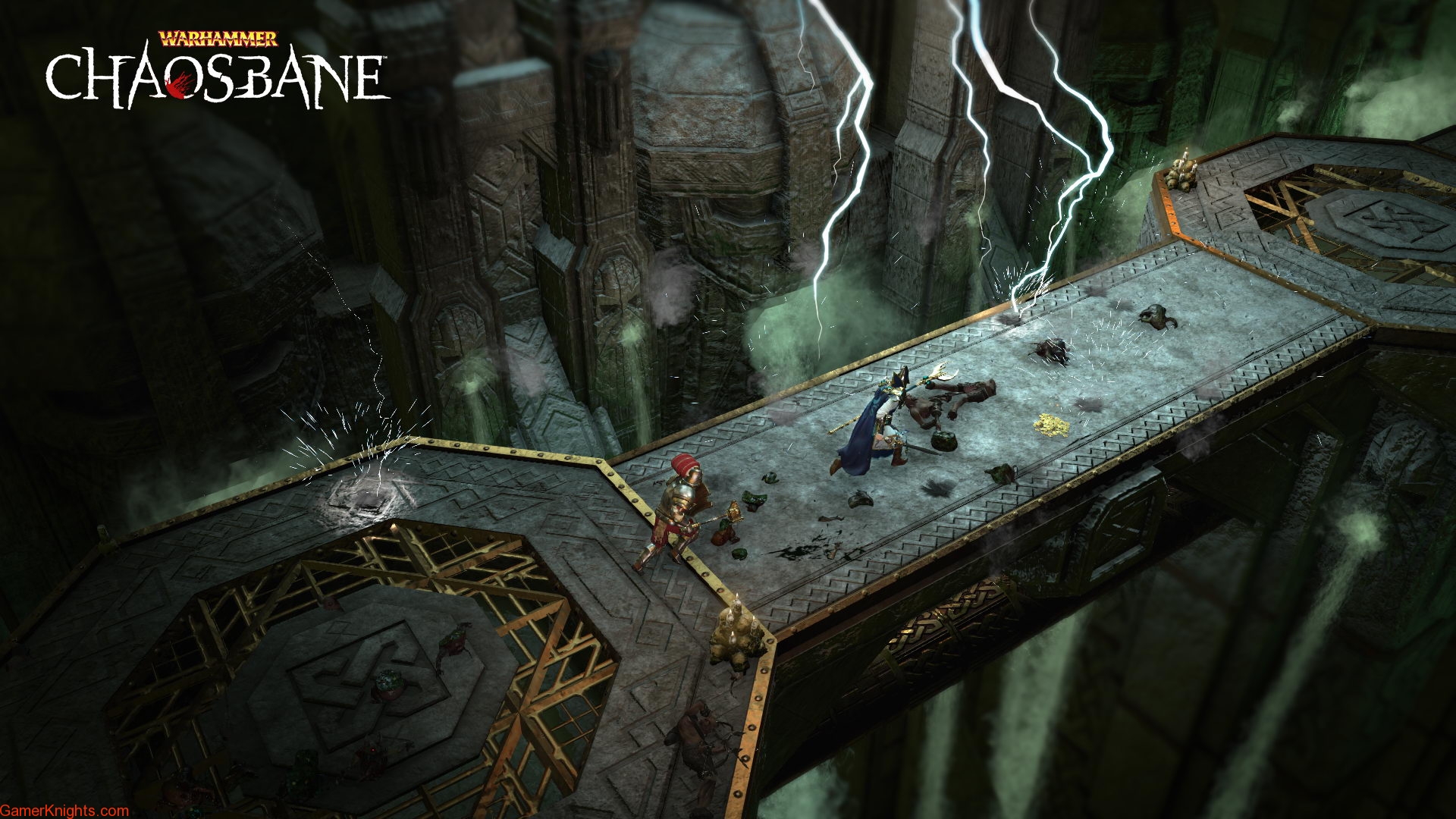 You don’t have infinite skill points, and you’ll have to decide whether you’d prefer to balance your skill points across the various abilities, which also include some passive skills, or whether you’d like to min/ max your character to just having a few devastating attacks. Some of the spells can also be controlled using the other stick, which is a bit unintuitive to start with, but eventually gets easier to control.

The loot also ends up being pretty decent too – certainly nothing spectacular or as interesting as some of the other mechanics, but neither is it a let-down. The campaign will take you through Praag, Norsca and other locales, and is a decent enough length. As well as having achievements for completing the game with all four characters (and levelling them), there’s a decent end-game too. You can replay missions, complete bounties and treasure quests and gain access to the God Skill Tree. I’m not sure it will keep people around for 7 years, but there’s certainly value to be found in the package at launch, even before any other content is released.

Multiplayer is well implemented – up to 3 people can join your game, or you can join someone else’s. The matchmaking was pretty quick, although the first time I opened my game the people joining were clearly a very significant level above me – both in terms of their power and ability, clearing everything in my path effortlessly, leaving me just to pick up the loot and some much-diminished XP. You’ll also find the game hangs a fair chunk when opening up your game from the menu, but thankfully in-game performance was actually very good. 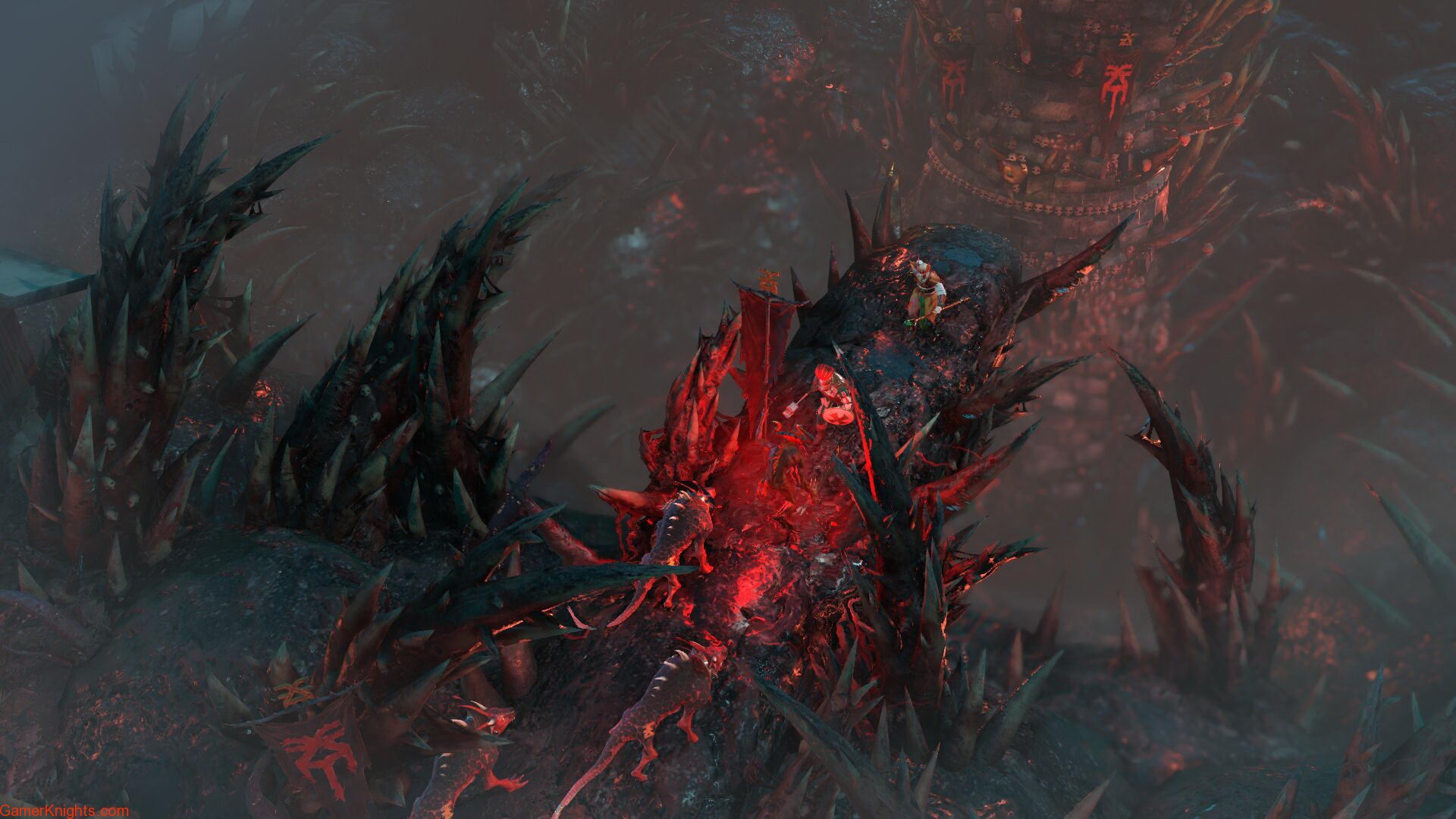 Let’s face it, many of these licensed GW games are made on a budget, but Chaosbane does a pretty decent job of capturing the grimdark world of Warhammer. It’s no Vermintide, but the cities and back-alleys of the Empire look fairly grim and depressing, whilst there’s also plenty of variety in the maps (although you do perhaps spend a little too long in an area before moving on). Character models and animation are decent, and you can clearly see the visual effect of loot. Spell and damage effects are probably the highlight here. Cut-scenes are generally done in a book/ cartoon style, and do their job without being outstanding.

Unfortunately, more effort went into the visuals than the sound. The music is some of the more generic fantasy accompaniment, and is also fairly limited as well as not really finding the perfect tone. But the voice acting is pretty budget. It’s good that every line is voiced, but the quality is poor and there’s no ambient atmosphere in the hub worlds.

“Warhammer: Chaosbane” is a surprisingly accomplished action RPG. The prologue is pretty poor, but as soon as your abilities start to unlock, both the nuances of the combat and the excellent skill system start to open up, and the loot starts to make an impact too. After this rather-too-slow start, you’re presented with a decent campaign and solid chunk of end-game content too.

There is little revolutionary here, but there are few weak elements and ultimately Chaosbane comes as a very pleasant surprise and recommendation.