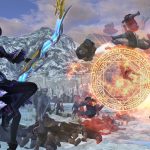 Fresh from E3 2018, KOEI TECMO Europe revealed that Warriors Orochi 4, the latest instalment in the one versus thousands action game series, will feature the return of fan-favourite split screen co-op! Slated for release across Europe on 19th October 2018 for the PlayStation 4, Nintendo Switch, the Xbox One , and digitally on Windows PC v...[Read More]