WRC returns for one more time this year ...

The arrival of WRC 8 last year at such a time was a pleasant surprise for all the rally gamers, since it was practically a creation that managed – after years of struggle with mediocrity – to throw off almost all the negatives and do a big step forward. So, when, after months, the 8th version finally stopped accompanying us, the question arose as to what more the development team could do and surprise its rally friends even more.

With WRC 9 being the last game in the KT Racing series before moving to the Tet Drive franchise, we’ve found that the additions and improvements to this version are minimal. WRC 9 also falls into the same trap that prevented F1 2020 from standing out, and that is stagnation. Many times when an annual update is more than expected to improve, suddenly its subsequent development begins to become more and more difficult, more limited. At the same time, the obsolete hardware and the global pandemic, will undoubtedly affect the development team, so we really hope it finds itself in the next generation, with a better – as we will see below – technology.

In practice, the WRC 9 looks like its predecessor like two drops of water, with all the good or bad it entails. The similarity is almost scandalous in all its areas, but since its level of quality is so high, this similarity does not bother. Really, who does not want to put on his racing uniform, grab the steering wheel and pour into a digital environment on countless routes around the world full of dirt, mud, snow and dust, when all this is given in such an impressive way? 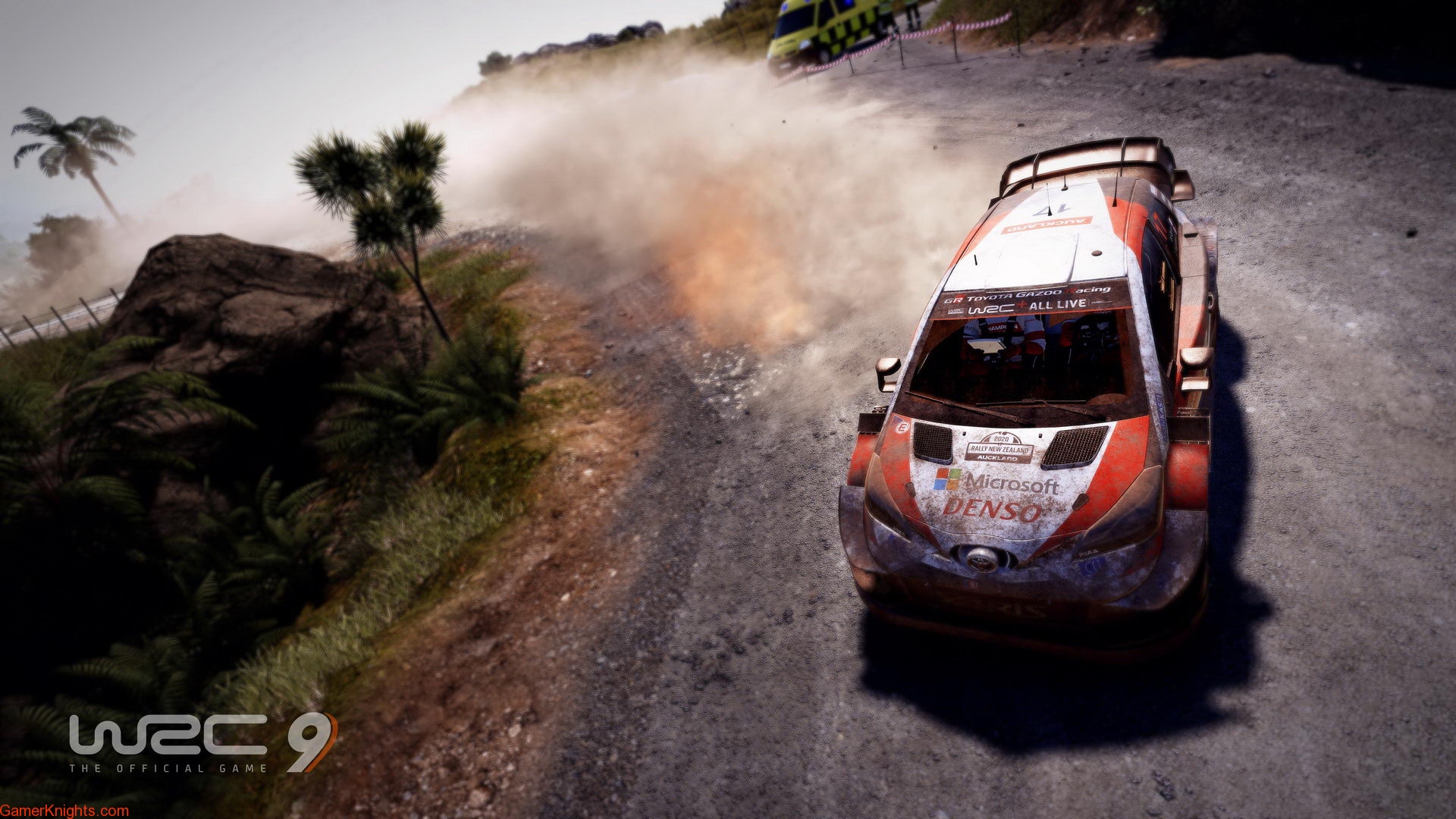 Making a detailed presentation of this new member does not make much sense, since our opinion on WRC 8 is considered to cover even the smallest detail. From then on, Kylotonn continues to excel in areas such as presentation and so the new member starts lazily and without impressing. The tutorial mode has a fairly basic form, although the title shows its teeth from the beginning, not forgiving the mistakes. The driving aids provided are not many, but even so beginners will be able to enjoy WRC 9 to a great extent. Essentially, driving assists are limited to the use or not of traction control, ABS and automatic transmission, which in our opinion are more than enough.

However, from the very first route it is clear that the development team has slightly disturbed the physics model, with cars moving more lightly on the road than in the past, resulting in even more corrections to the steering wheel. Prolonged braking is no longer the solution, as the driving model has been designed based on the use of a manual transmission, so that the engine power is constantly utilized to the maximum, thus helping to increase mechanical traction and keeping the vehicle in the desired direction. the player. 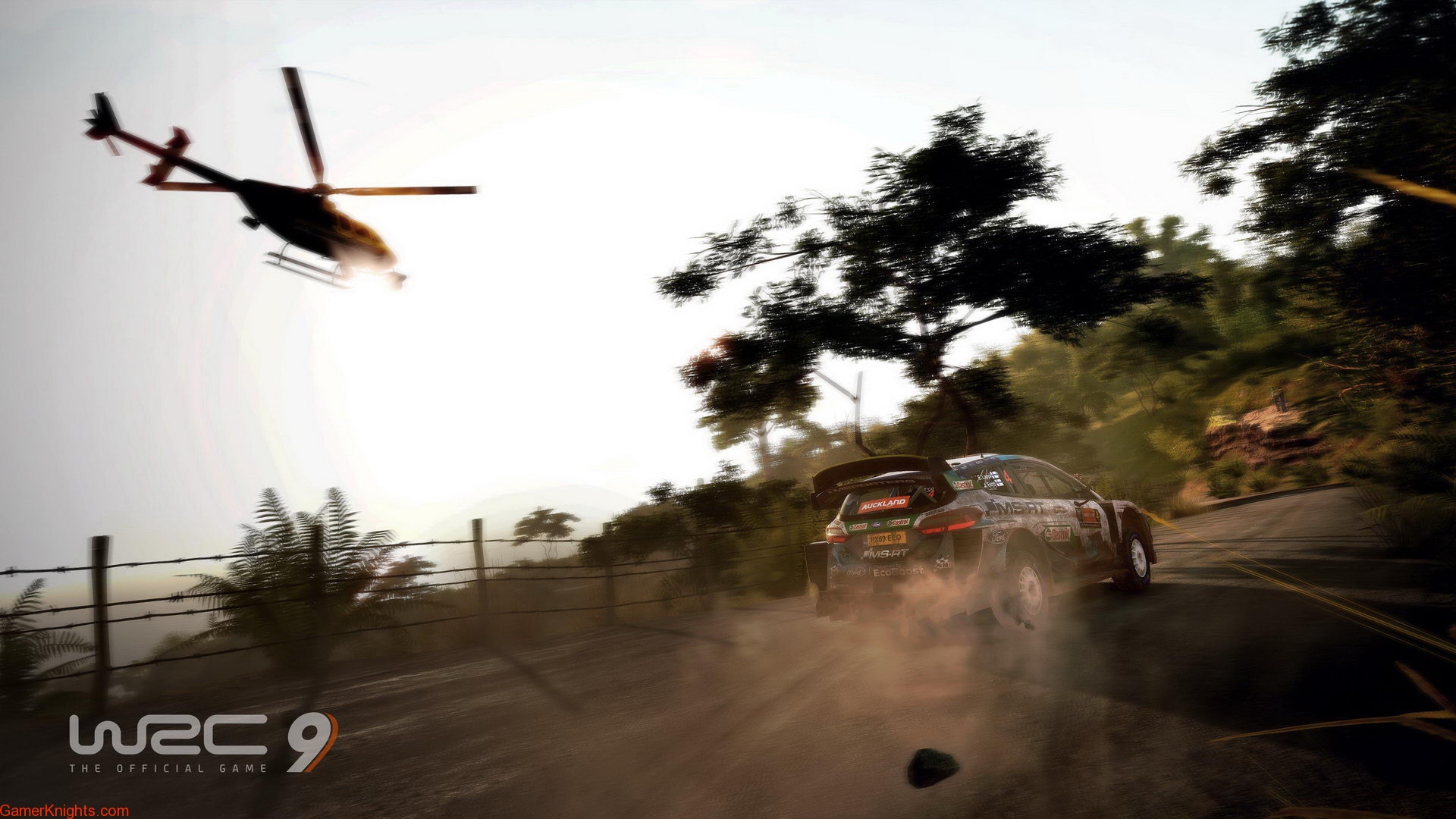 However, WRC 9 is not designed for everyone and activating the above driving assists reduces the value of an otherwise top driving model accompanied by well-designed physics. At the same time, it is obvious that the title requires the use of a steering wheel – the sponsorship of Fanatec really stands out – and everything has been set up with this … small detail in mind. The simple gamepad finds it difficult to follow what is happening on the screen, presenting an imperceptible lag, while at the same time refusing to return the wheels to a position parallel to the direction of the vehicle.

This, like last year, is an important thorn in the side, because the title is moving at very high speeds, in an environment where traction is constantly changing and requires very fast reactions. With the use of a steering wheel, driving is once again very enjoyable, reaching the same levels as the DiRT Rally, but if you want to reach the top, you need hard training and correct interpretation of the passenger instructions. The latter finally seems to be coordinated with the action and to inform in time about the upcoming turns as well as about their difficulty and so while last year he was a real accomplice, this year he justifies his presence to the maximum.

In terms of options, WRC 9 does not disappoint and fortunately the main menu now follows the logic of Codemasters, where the countless screens are very nicely divided into categories, while the title offers continuous feedback on the player’s progress and available online events – if and unfortunately the information about the world championship has been frozen due to the topicality. 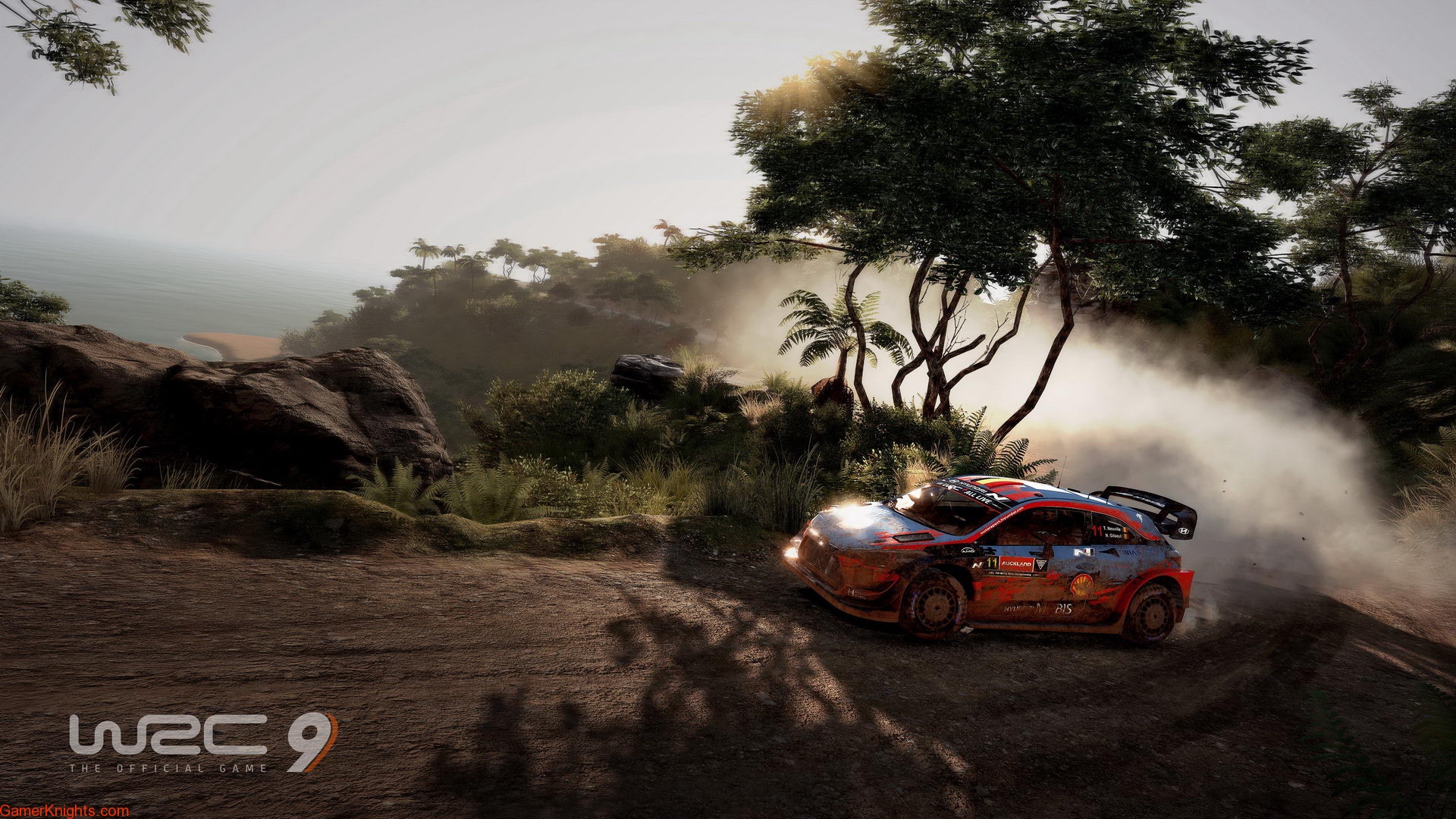 As expected, career mode is what will again steal the show both in terms of presentation but mainly in terms of content. The factory and the research center are presented not through static screens but with real time graphics, and it is amazing that not so interesting sections – like that of marketing for example – have been captured in unique detail. After the player chooses the team of his choice, he has to assemble his team of engineers, where over time and covering more and more kilometers, they will gain more experience, making repairs even faster. The R&D department will redeem the degrees of experience in areas of car improvement, both in mechanical parts and in aerodynamics,and if all of the above sounds exciting, the interesting thing is that everything is in the player’s control.

Clearly there is the option for automatic upgrades and adjustments so that one does not get lost in the R&D tree, but in this way the feeling is lost that the player is in complete control and is a member of a racing team. WRC 9 is one of the few proposals where the slightest change in a setting affects the car so strongly and so the countless hours of testing and experimentation are simply imposed.

The other modes are the ones that one usually encounters in a racing game of this category, while in terms of routes the title does not disappoint. For another year the strong paper is variety and quantity, and it is practically impossible to memorize a path from beginning to end. This is mostly due to their length, with some of them lasting more than 10 minutes, so everyone can understand that patience and careful interpretation of the passenger instructions are required. On the other hand, the list of racing cars is limited for another year, and although they are divided into five categories, their total number is small.

The institution itself has a share of responsibility for this, of course, where the decisions of recent years have removed well-known factory groups. The WRC has changed, and as with F1, the decisions made do not always seem to be in the right direction. Our complaints are mainly focused on the Legends category, where the list is heartbreakingly short, and the driving of these vehicles seems to be somewhat problematic. After a few minutes, the inability of the physics model to adapt and properly render the behavior of these “beasts” from the past on the road becomes visible, so we want to hope that both the poor list and the driving of these vehicles will improve. in the future with an update. 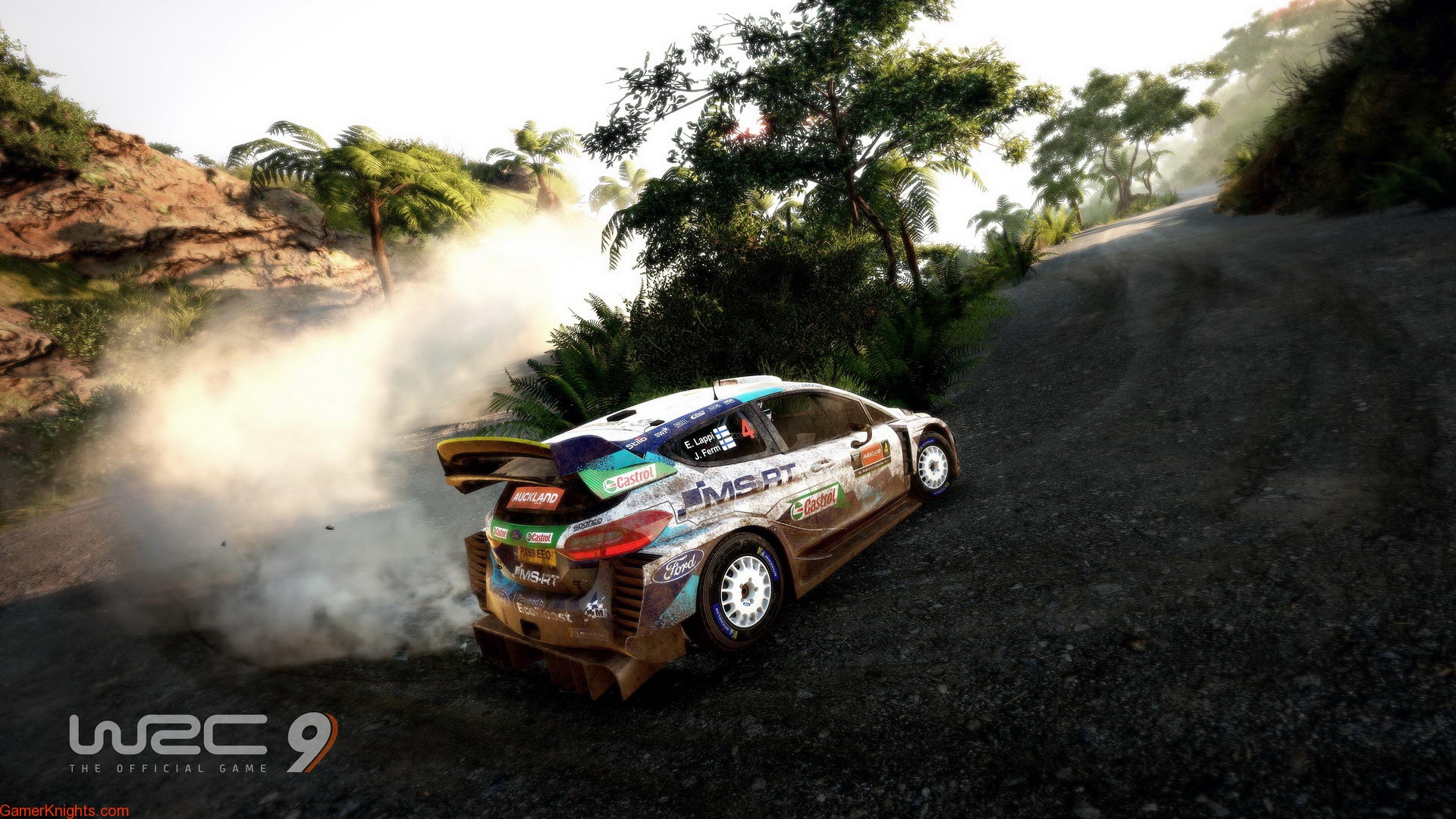 In other areas, WRC 9 is not disappointing, both offline and online. The races faithfully follow the logic of the Rally institution, and so the players will essentially be constantly at odds with time and not with another vehicle at the same time on the race track. The most visible change compared to last year, and passing to the technical issues of the title, one could say that the development team experimented with the color palette and so the darker tones make the whole look more convincing.

The routes are the protagonist this year as well, both in terms of numbers and in terms of design. Their variety is unprecedented, with the development team claiming that several parts have been transferred from reality, while the various lighting effects are quite cleverly designed. An obstacle, however, is the proprietary graphics machine, which is unable to hide its age and at the same time to “marry” the vehicles ideally with the road. Especially the image of the former is not flattering -a general thorn of the series- however they move fast, without “breaks” in their rhythm and with a very stable frame rate.

It is true that WRC 9 during the first hours of testing did not leave the best impressions, because it simply relied too much on its predecessor. But as the days went by, it was practically impossible for even one to pass without us. Especially the career mode will absorb the players to such an extent that one will hardly be able to find a reason to whine. One repetition never hurt anyone, and our humble opinion is that all motorsport fans should take a look.