The Impossible Lair is this generation's best 2D platformer. There, I said it!!

As a diehard Banjo fan, I was ridiculously excited when Playtonic – a company made up of former Rare developers – was formed, with the mission statement to bring back the platforming golden age. Their debut, Yooka-Laylee, was good but somewhat wanting, its worlds stretched a bit thin and its ideas scattershot. I thought that might be the end of the Rare rebirth – but I was wrong. The Impossible Lair – Yooka and Laylee’s second outting – is an entirely different story, and it’s Capital B-eautiful.

Capital B, the nefarious Bee-overlord from the first game, is back, and this time he’s constructed a lair so dastardly it will be impossible to complete. You’ll instantly find that out, by the way, as the lair itself is the game’s first stage. As a gamer of unparalleled skill and with nearly three decades under my belt of jumping from one platform to another, I thought “Impossible? Oh yeah?” and undertook the task of quickly dispatching any game foolhardy enough to throw their last level at me first.

I was abruptly knocked on my ass. The Impossible Lair is quite fittingly titled, it turns out, and whilst people who may or may not be deities of a higher plane have in fact proven it can be beaten immediately, us mere mortals will have to endure the rest of the game – and the rest of Capital B’s collection of death-trap filled levels – to even stand a chance at reaching the endgame. 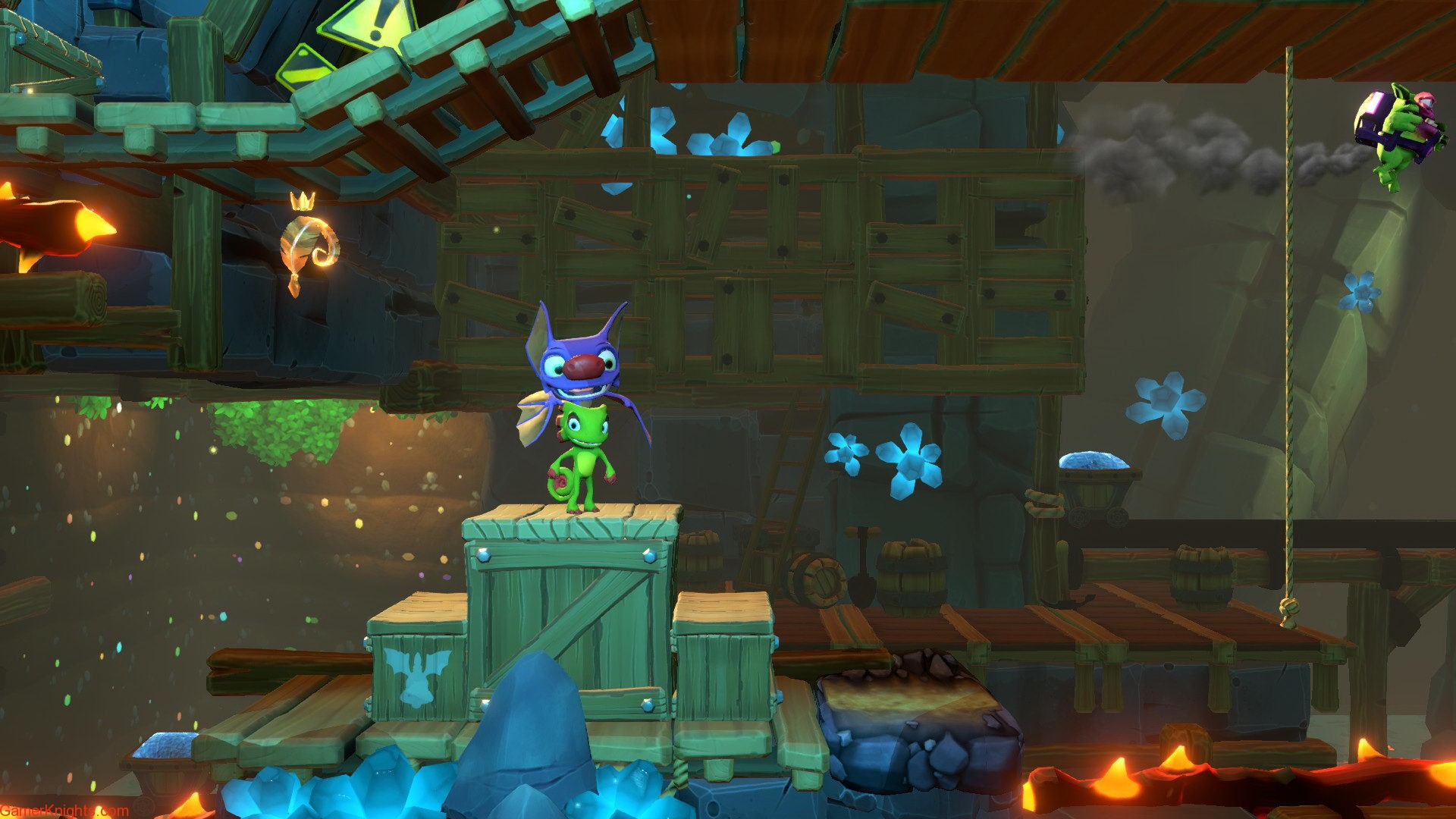 The story is good, Yooka and Laylee are still effortlessly likeable leads very much in the mould of Banjo and Kazooie, and the world itself is full of bit-part characters that are instantly funny and endearing. There’s that cruel sense of humour Rare was always known for – I’m not ashamed to admit I laughed heartily as a sentient crate was smashed to planks as his sobbing friend looked on, all for the sake of holding down a level-opening button – and whilst it never really ‘goes’ anywhere other than “defeat the evil bee”, it never really needs to.

If Yooka-Laylee was another attempt at the long-dead 3D collectathon platformer – an experiment that only sort of worked, but mostly reminded everyone that the genre was dead for a reason – then the Impossible Lair is a throwback even further into Rare’s back-catalogue. Taking what the company was originally made megastars for – their Donkey Kong Country games – and applying a fresh coat of paint and loads of fun new mechanics, the Impossible Lair is an absolute triumph.

Full of tough-as-nails platforming sections and extra challenges tucked away in hidden corners of each world, the game is a treat to explore. This is helped immeasurably by just how fun it is to control our daring duo through each gruelling stage. Their moveset is full of tricks you’re bound to be familiar with – butt stomps and quick rolls and floaty hovers – but its the momentum you can pick up whilst racing through each level that really sets the game apart. Add to that a slew of game changing tonics hidden throughout the game that allow you to customize the play to your liking and you have a game that is simply a joy to play. 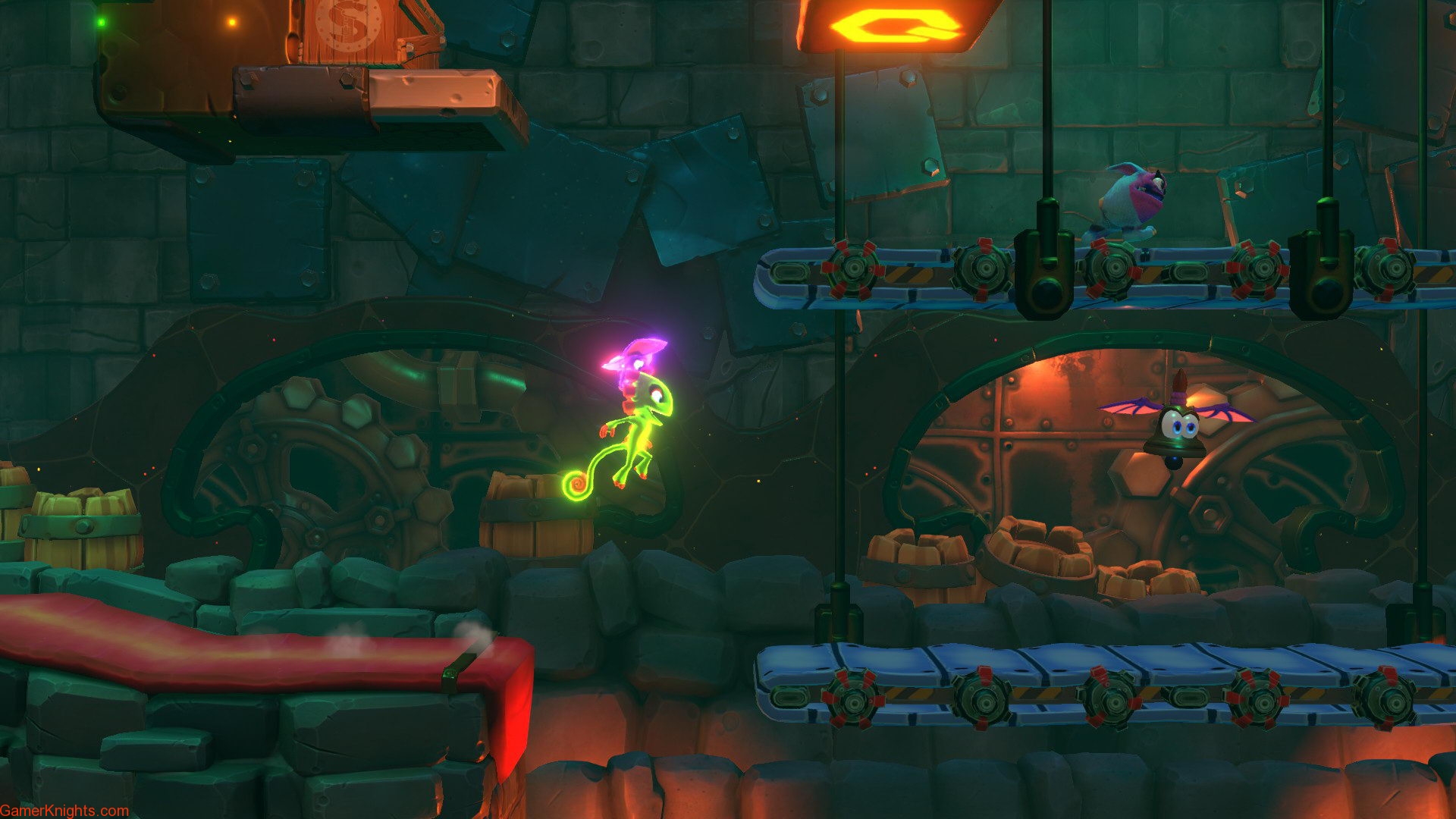 Offering twenty levels full of bad-guy-bouncing, secret-finding, hair-pulling excitement would have arguably been enough – especially when the levels are as wonderfully designed as they are. But Playtonic prove to be a ridiculously generous developer – especially considering the humble £25 price tag the game retails at – by adding a variant to each and every stage. The original Yooka-Laylee played with the idea, allowing you to expand levels and trying to call them fresh, but in the Impossible Lair these stages are completely transformed. Spilling honey onto one stage in the overworld gives you a molasses filled swamp to traverse in place of the originals jungle, and secrets that seemed just out of reach in your first playthrough are finally attainable in the second. From covering a stage in water, to adding gale force winds, and even flipping the entire thing on its head, The Impossible Lair gives an interesting and exciting spin on every level in the game, bumping the count to 40. To call these variants is to do them a disservice, as most feel like brand new stages built from the ground up.