Crafted World isn’t as innovative, interesting or challenging as Mario Odyssey, but is utterly charming and a real visual treat. Some may find the game too easy, but I found it engaging enough by itself.

The Yoshi games have always been quite divisive amongst Nintendo fans, both from an art style and gameplay perspective. Still, after a glut of excellent exclusives, can there possibly be any issues with a new Yoshi platformer in 2019?

Unfortunately, the attempt at story is even more contrived than your average Nintendo platformer. Kamel and Baby Bowser show up in an airship and attempt to steal some gems. Obviously it goes a bit wrong and they are spread over the world. the Yoshi’s go after them, and encounter a few random characters along the way, who are mostly there to gate progress and add a few words of text to proceedings. Some plot elements are barely (or just not) explained, such as the importance of the costumes, and why you can in some levels pilot a huge Yoshi robot (although this is cool and fun!).

Crafted World isn’t a hard game to play through, and even includes an easy option so that you can just continue to use your wings as infinitum. If you do miss a jump, chance are you can recover with mini-mum effort, and if you get hit by an enemy (who are mostly window dressing) you have huge amounts of health compared to an average platform game. On top of this, you can wear costumes, which pro-vide armour, and there are frequent health pickups through the levels too. The actual platforming is itself is pretty breezy when compared to Mario games; in fact there is very little challenge in simply beating the 40 or so levels in the game (an endeavour which in itself will take only about 6-8 hours for all but the youngest players). 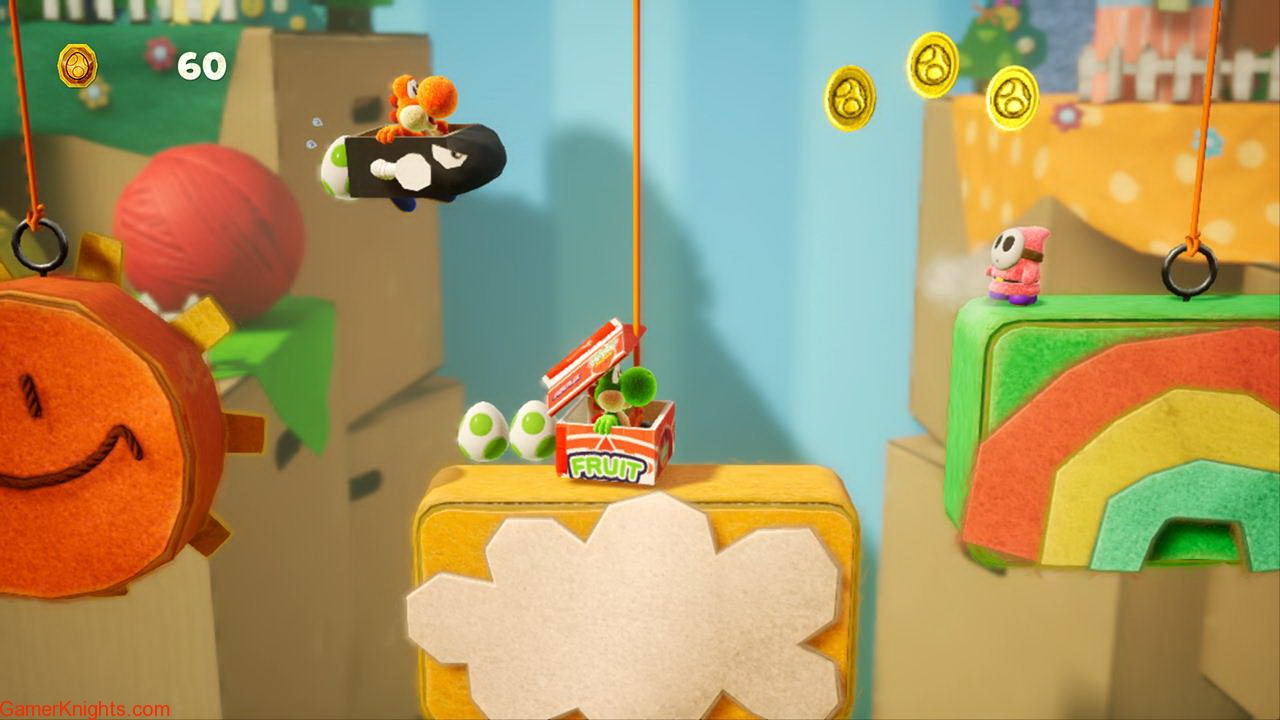 Instead, the game has lots of replayability, and you’ll probably need to play most levels 2-3 times to pick up all of the flowers. Some of them are obvious, some require a little additional platforming prowess, some require some excellent observational skills, whilst some require you to manage your egg supply perfectly. There’s always something hidden behind the cardboard props, from coins (red or gold) to flowers or even embarrassed shy-guys. Using the eggs initially doesn’t seem that intuitive, as you can aim them at the foreground and background of the otherwise 2D levels. However, the target-ing system is very easy to use and within a level or two you’ll have the knack of it.

Replaying the levels will also allow you to earn more coins, which can be used in the store to unlock more costumes. Annoyingly, these are randomly awarded, but thankfully there are no real-money transactions. But some of the best require an Amibo to unlock (boo). Still, with 170 on offer, there’s something for everyone, and they have in-game bonuses too depending on rarity. Many of them look hilarious too. 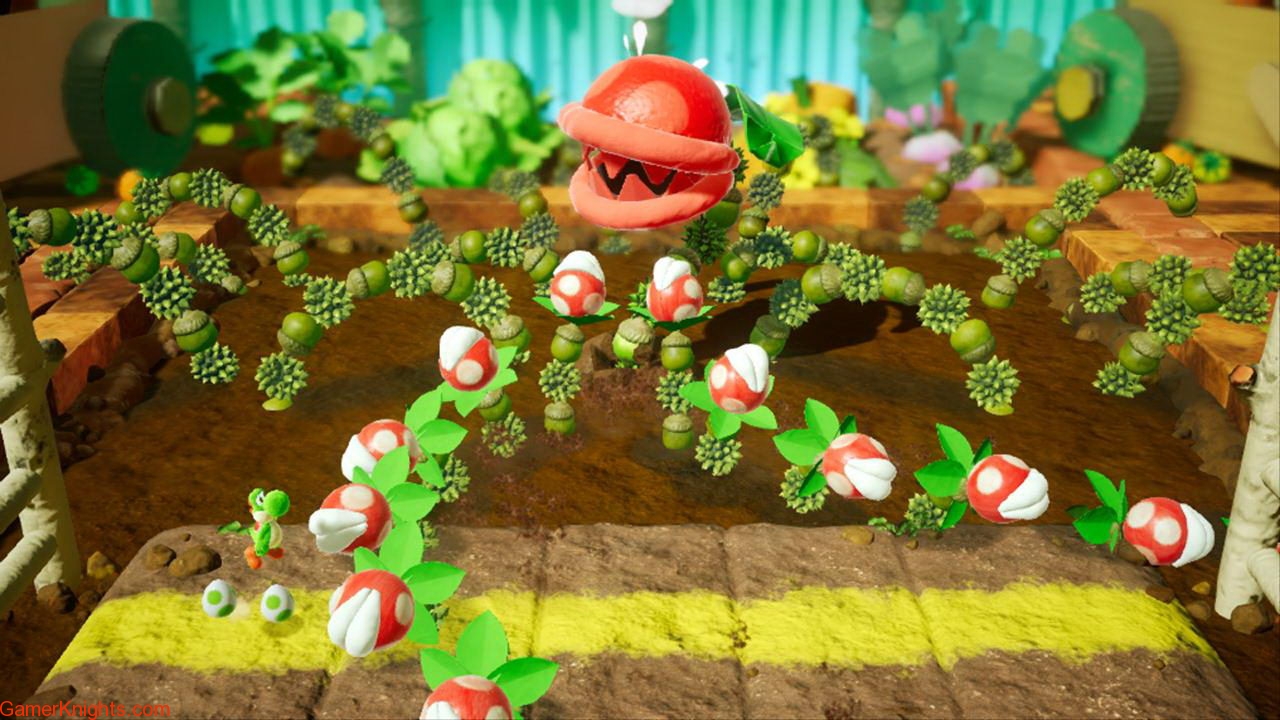 Multiplayer is quite limited, and quite silly, taking inspiration from New Super Mario Bros. It’s 2-player, local multiplayer, with both players as a Yoshi. It gets quite chaotic, because you’re forced into a rela-tively small area of screen estate, and you’ll often end up causing more trouble than help. Eating your partner (easier than it sounds) will destroy all their eggs, and you can also accidentally knock them off platforms or stop them reaching a platform by jumping on them. It’s fun once but tiresome for serious play.

Oh, the art style! Crafted World would be cool by itself, but the fact that it’s presented in a slightly unfinished way just ups the charm ante to the max. You’ll see props with card backs, things stuck down with sticky tape, which adds to the hand-Crafted elements of the game, but I’m sure was harder and more time consuming than just filling the world with more consistent textures. This becomes all the more obvious when you unlock the ability to find the “poochy pups” in each level, as you have a timer to find them on reverse versions of the levels, and they feel surprisingly different. 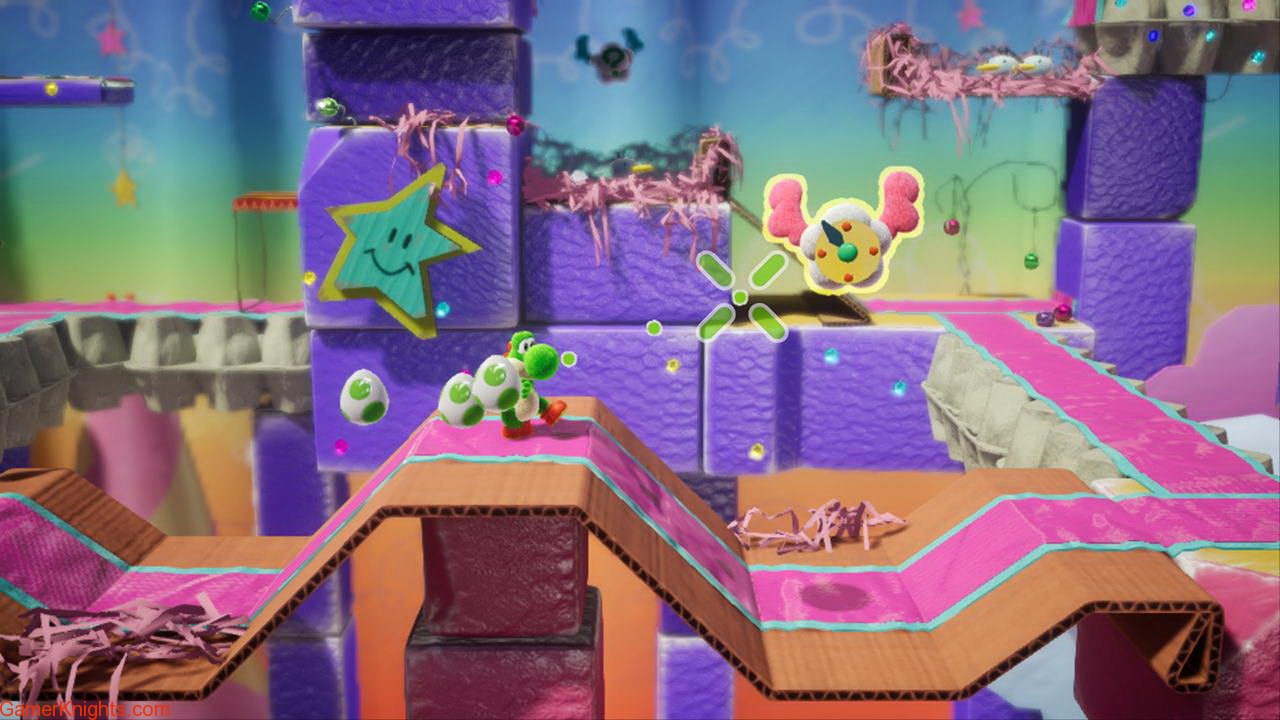 There’s also a lot of variety, with levels broken down into mini-worlds. And I mean mini, because you will rarely play more than 2-3 levels before moving onto an entirely new and charming art style.

The music is just as cute, and I challenge anyone not to be humming along as you play through the game. It’s relaxing and perfectly fits the game and style. Whether you find the Yoshi noises as cute will be entirely down to personal preference but I certainly don’t take offence to them!

“Yoshi’s Crafted World” is just that – a beautifully crafted world with plenty to do and see, and one of the most charming art styles that any game has managed in recent years. The game is light on challenge, but for most people, simply experiencing the art style is worth the price of admission. Thankfully, each level does have plenty to do, and most will require several playthroughs to unlock everything, making this fun little game good value to boot. Unless you’re looking for a new MeatBoy or CupHead, Crafted World will be a delightful way of wasting a few afternoons