A confidently intricate narrative maze to get utterly lost in.

Developer Vanillaware are one of the most fascinating, exciting companies in the Japanese games industry. Each of their absolutely gorgeous games are wildly different to one another, familiar only in the style they’re drenched in whilst boldly striking out in all other regards.

Their latest darling, 13 Sentinels: Aegis Rim, is a brave amalgam of sci-fi, steeped in Japanese cinema and dripping with golden-age mecha anime vibes whilst delivering something starkly unique. The only problem with such a gem is that it’s a difficult beast to sell without giving the game away.

Where you’ll feel that most is  the story. 13 Sentinel’s main draw is its complicated web of narrative threads, woven so wonderfully together and offered to you with a worrying freedom. A tale told from a myriad of different perspectives and timelines that you’re allowed to pick and choose from, you might wonder if you’re approaching them in the best possible order to comprehend the intimidating story here. Luckily, 13 Sentinel’s greatness is rooted in such memorable characters and such distinct time frames that once you’re invested, you’ll find it a lot easier to keep up with the twists and turns than you may have previously thought possible. 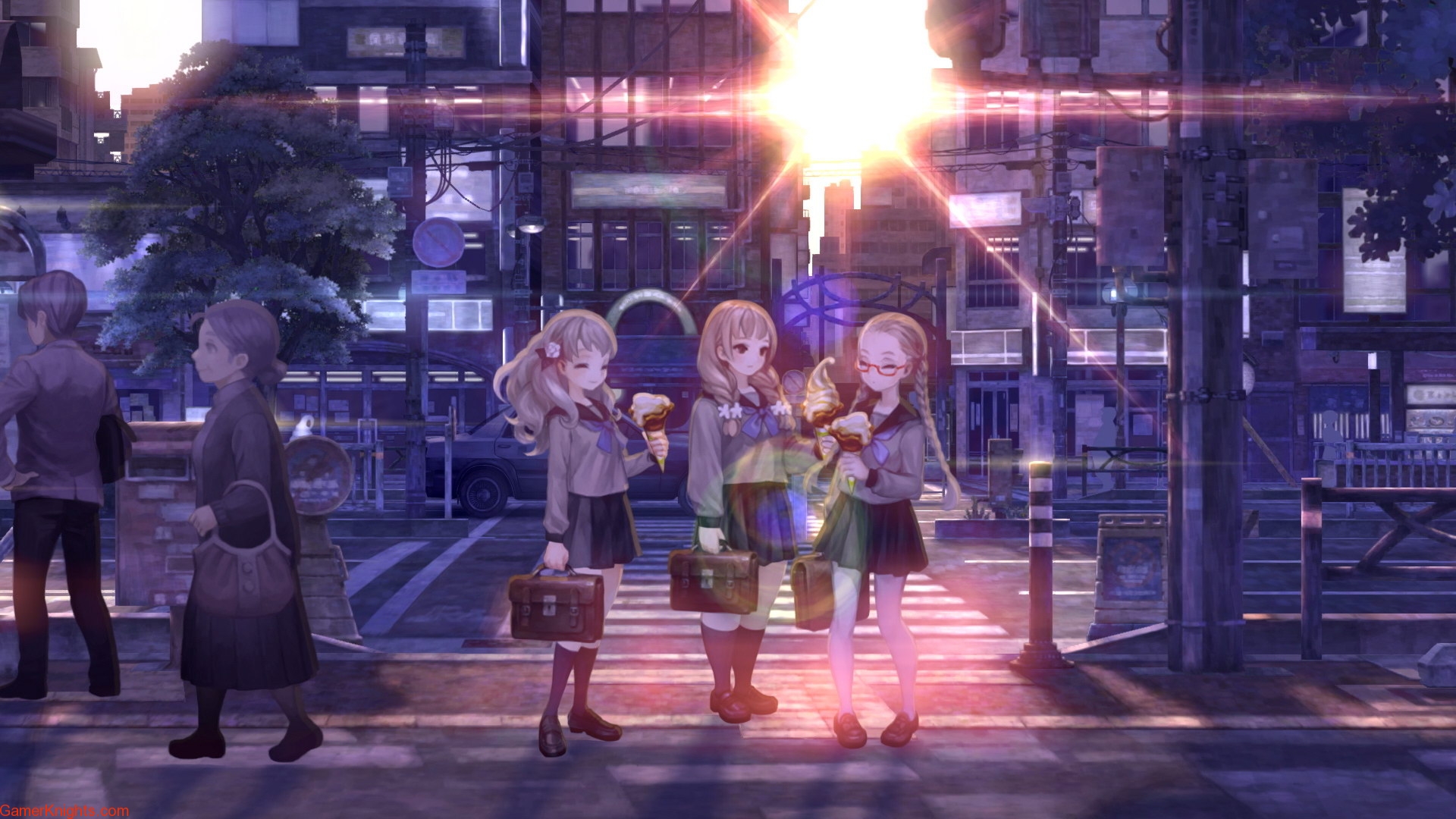 The narrative is utterly arresting – once you’re in, you’re in. Initially set in a wonderfully rich diorama of Japan in the mid 80s, we’re introduced to our first few cast members in a sleepy school who are all having the same worrying dreams. Dreams of giant mecha battling alien Kaiju amidst a burning Toyko. But within the hour we’re time hopping, pulling characters out of wartime Japan and dumping them in the future, locking them in time loops or ever wilder set ups. Through these involved and varied narrative beats we’re introduced to an ever broadening cast of kids thrust into a war they weren’t ready for, and things go from weird to weirder at an initially alarming rate.

But as I said, soon you’ll feel comfortable in this weird world, soon the fate of these kids will mean more to you than you ever though possible, and you’ll be giddy with the ebb and flow of the game’s fascinating script. The true beauty of this game is here, in its narrative side – so dominant is it to the game’s almost periphery battle features – and it absolutely nails it for the thirty hour adventure. It’s not the most interactive experience – often boiling down only to thinking about a certain subject or approaching a friend with a topic you overheard – but its gripping stuff nevertheless. 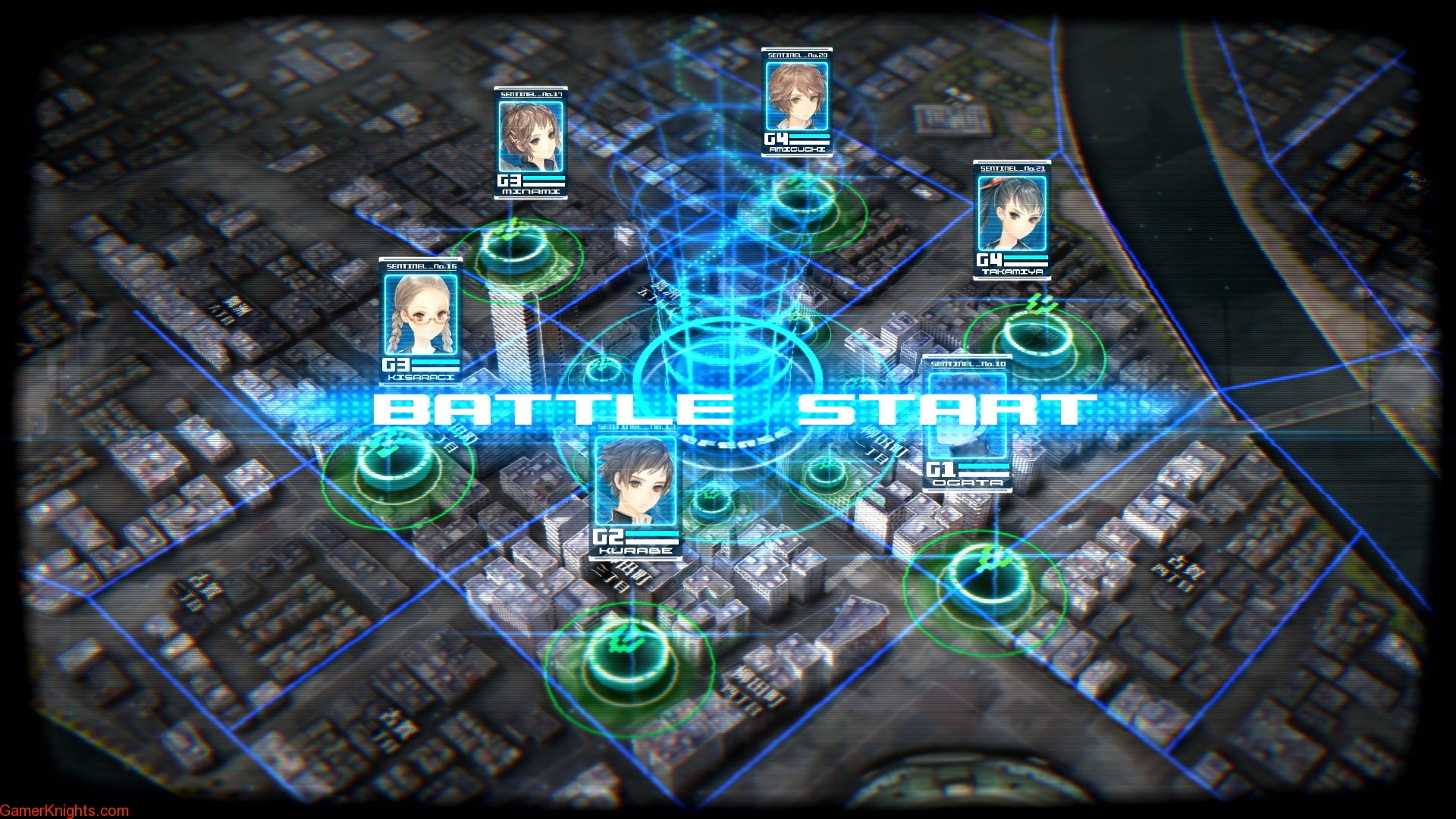 When you’re not parsing the game’s rich lore,  exploring its world and interacting with its host of loveable characters, you’re out there on the battlefields fighting with them at your command. This is where the game falters ever so slightly – its gorgeous, painterly 2.5D art falling away to reveal a clinical looking, mechanically rote battle system. As the city blooms around your cursor to reveal a very TRON looking vision of future tech – as angular and sharp as that movie made lightcycle races out to be – you send giant robots around to kick alien ass. The mecha are represented by logos, as are the enemies, and the grid-like city blocks hem you in to a disappointingly cardinal fight. Considering the lineage of Vanillaware’s art department, I was bummed to see such a boring looking gameplay element take center stage.

The battles themselve s are fun enough, with just enough depth in each characters options to make its strategy worth engaging with. Whether you’re zooming around in a lightning fast 1st generation robot, making roadkill of any Kaiju foolish enough to kindly line up, or lighting up an entire block in a bigger mech with a barrage of shoulder-mounted missiles, you always have options to make the best of a sticky situation. There’s some interesting ideas that open up later on and a servicable amount of progression, but the variety only goes just far enough to make these distractions engaging for their brief run time (in comparison to the meat of the story).