2016 Doom was a game that was much greater than the sum of its parts, whereas Doom Eternal, whilst having a brilliant combat loop, doesn’t quite hit the mark in the same way.

Doom 2016 was one of my favourite games of this generation. Can the sequel, “DOOM Eternal” live up to one of the best reboots of all time?

One of the best things about the 2016 game is just how dumb it was. The story felt like it had been written by the guys behind the 2005 NF Most Wanted – it was the most brilliantly written game because it trod the line between trying to take itself seriously whilst being plainly ridiculous perfectly.

Tonally, the writers just don’t quite hit the same marks here, with some elements which are practically fourth-wall breaking, and other bits which are too blatantly cheesy. The story isn’t bad, per-se, just more in-your-face and takes up a greater part of the campaign. And despite the return of several characters from the 2016 game, it doesn’t feel as well-connected to the reboot as it perhaps could or should have done.

Thankfully the combat hasn’t been changed too much. You still have access to a wide array of powerfully weapons, don’t need to reload, and feel like a bad-ass from the off. What has been tweaked though is a greater reliance on the combat loop. It’s more essential than in the 2016 game to use your suite of abilities such as the chainsaw to replenish ammo, and the glory kills to replenish health. You’ll also need to dash away from enemies before they overwhelm you, use a new flamethrower to collect armour from enemies, and use grenades liberally either to cause splash damage or to instantly stagger cacodemons. The combat encounters are more focused into the different arenas that are staggered through levels, which changes the pacing and makes it both more and less frenetic. It’s also a harder game as a result, because you have to engage in the combat puzzle. Even with the extra lives that you can find amongst the levels, it still feels more challenging. 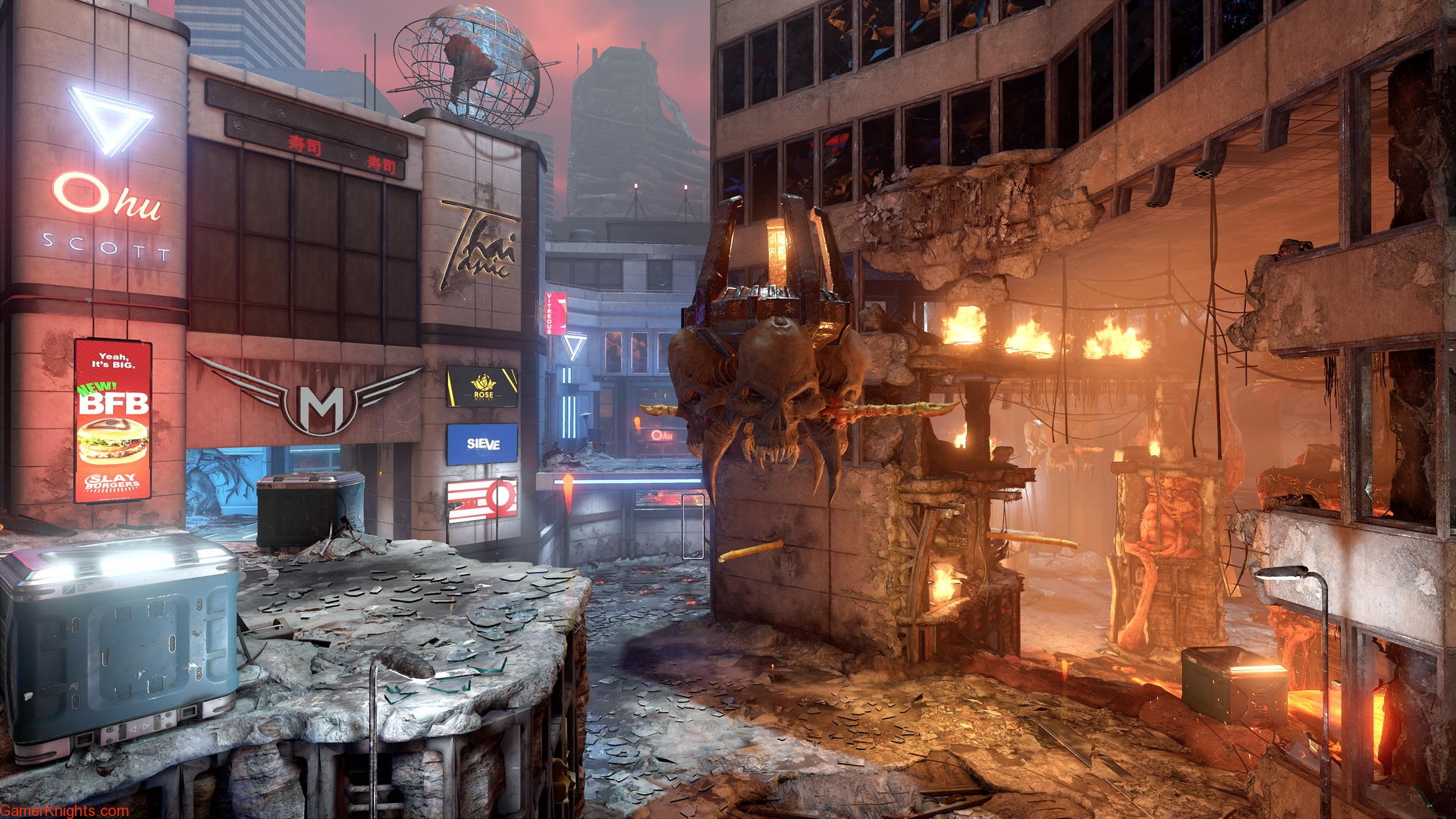 There’s also a somewhat higher amount of first-person platforming compared to the last game, which has mixed results. Whilst it makes for some impressive vistas, you don’t always feel completely confident, even if ultimately it’s about as good as FPS platforming can feel.

This change of pace generally makes for much, much longer levels. For the most part, I’d argue that they feel too long. One of the best thing about the original games was the fact you had par times for levels, most of which were 5-10 minutes long each. Most of the levels here will take at least an hour, and I would struggle to finish even one in a sitting. It makes progress feel a bit treacle-like at times. The game has also added in a large number of new systems. Whilst it adds some replayability through a larger number of collectables (and you can fast travel within levels and go back to them later), sometimes the amount of upgrades – weapons, suit, ship (and more, including a game-wide “doom level”), and ways to unlock them feel overwhelming and more geared towards a free-to-play style of game (thankfully there are no in-app purchases at this time). 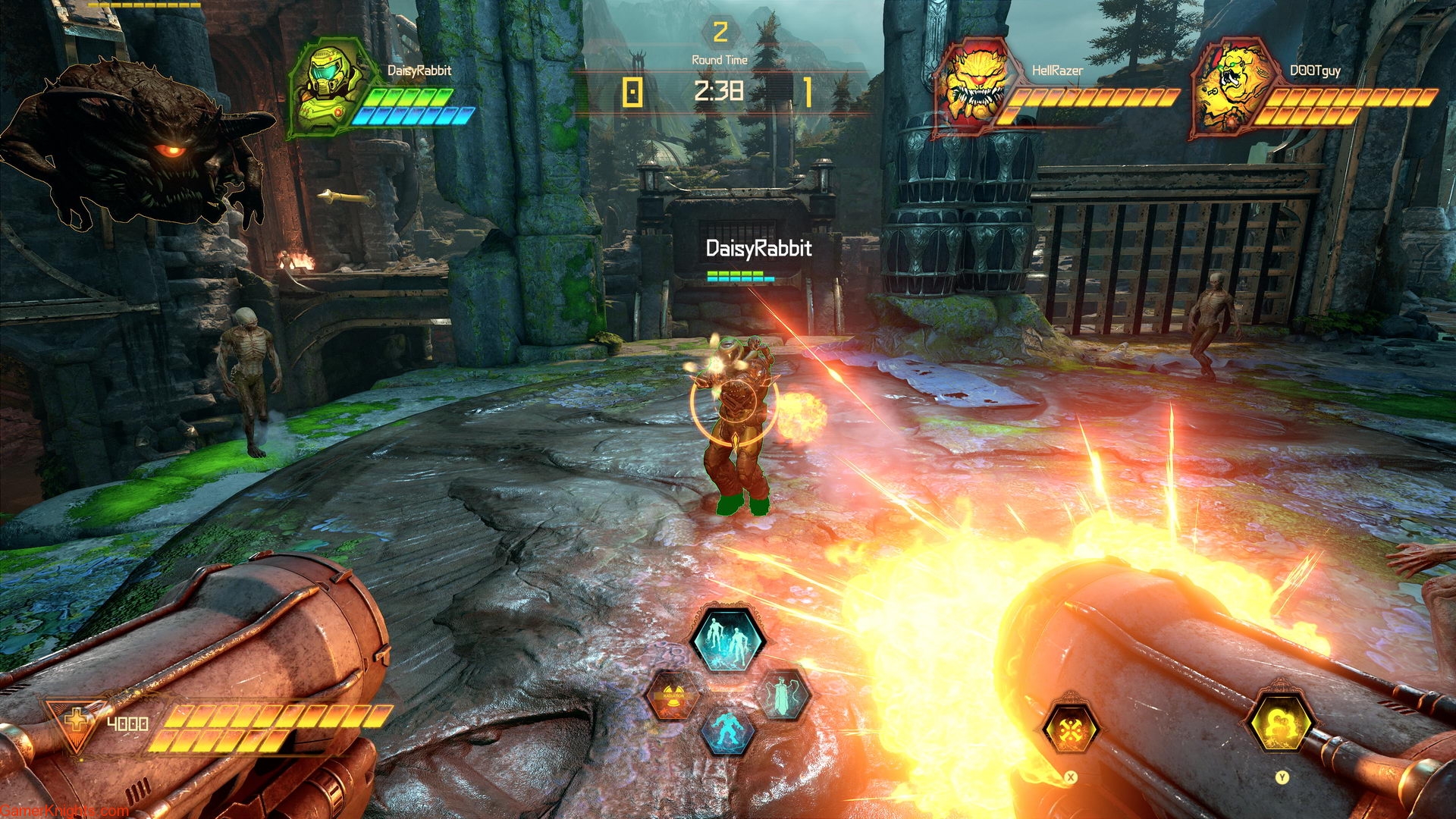 Personally, most of these things take away from the best bit of the game, which is pure, escapist fun by blasting a load of alien demons in the face with outlandish weapons. And thankfully, this is still brilliant fun. So whilst it’s sounding like I am moaning, I still really, really enjoyed the vast majority of the game!

The Battle Mode in Doom is a completely different take on multiplayer than in the 2016 reboot. It’s a 2v1 mode, where 2 players will take on some heavy demons, whilst one player will be the slayer in a best-of-three contest. Matches are quick, levels are tight, and the demons can summon AI to help them overwhelm the slayer, although of course this will allow the slayer to hoover up ammo and health from killing them. 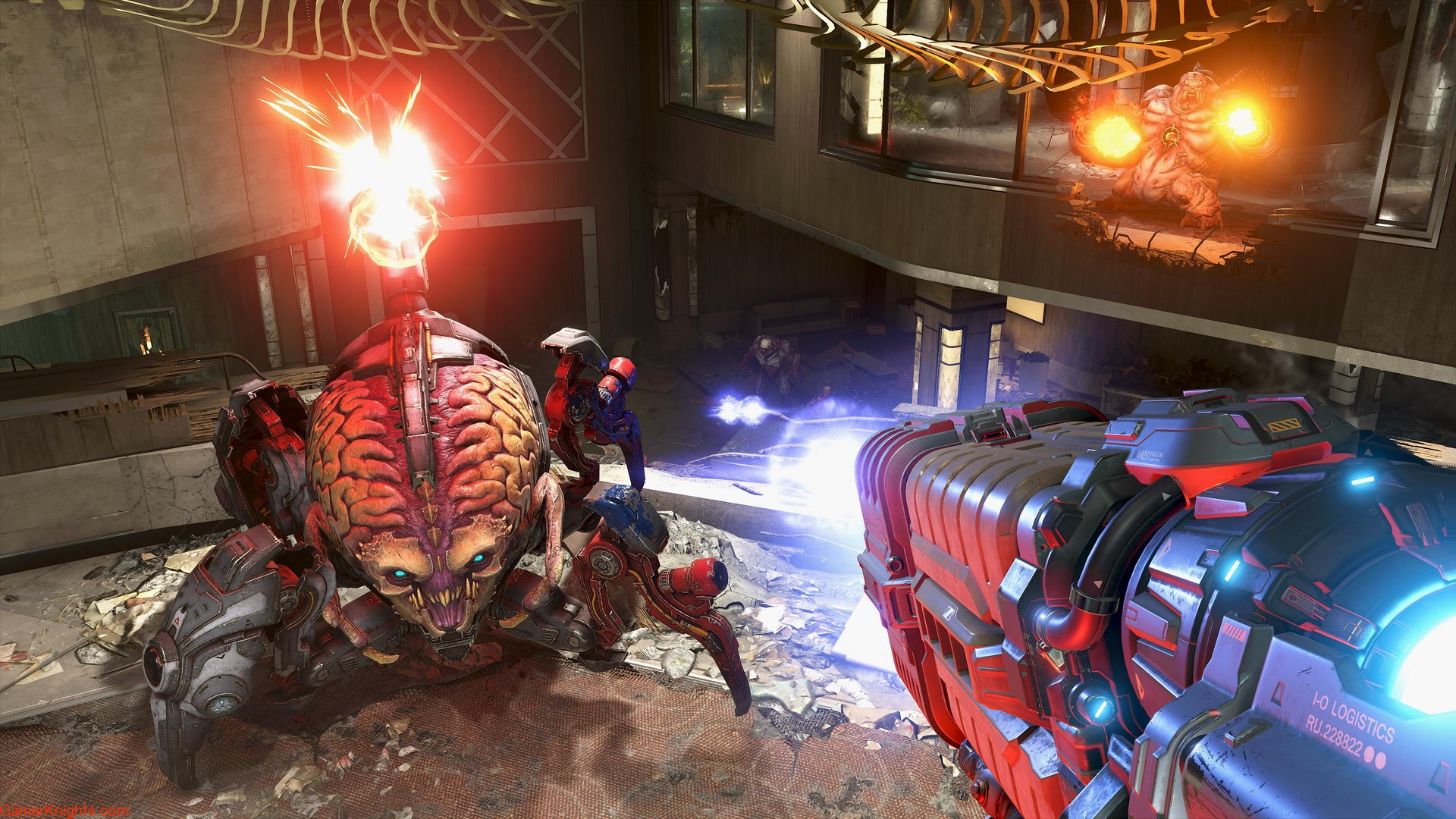 There’s a reasonably detailed tutorial, but going into the first match it became very apparent that you shouldn’t start out as the slayer – the odds are stacked against you, and even average players that can team up can beat a skilled player as the Slayer. I also found that some matches suffered from a little bit of lag too. It’s worth checking out for a few matches but I’m not sure that this will keep me occupied in the long term.

Doom looks absolutely amazing. The 2016 game was rightly praised for bringing a sense of colour back to first-person shooters after a decade of greys and browns ushered in by Gears and Call of Duty. And the level and demon design here is as spectacular as you could hope for, with some beautiful use of colour throughout. 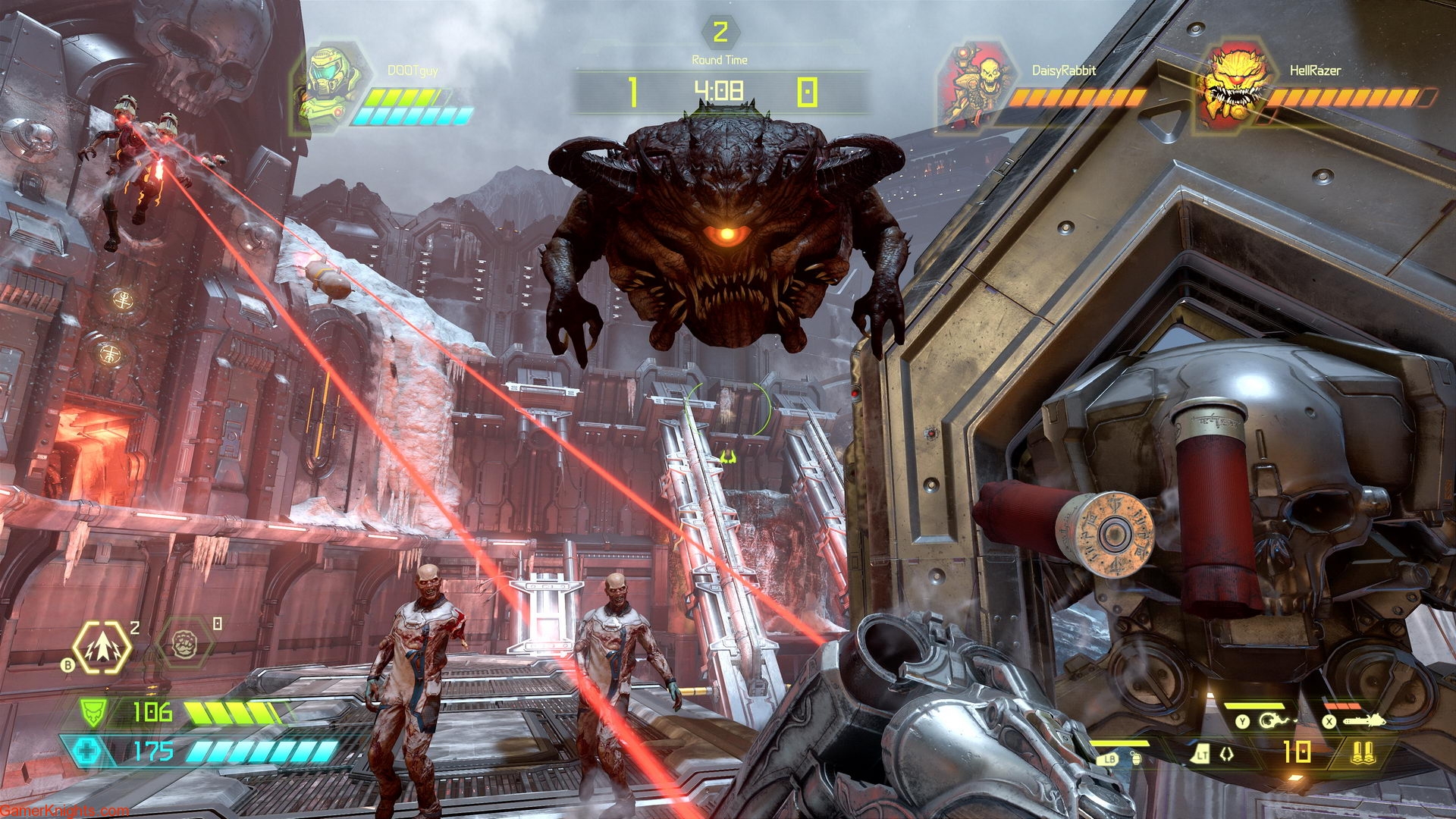 Performance is also excellent, with the Xbox One X version running flawlessly. Loading times also seem much reduced from the 2016 game, and the audio is also superb.

Doom Eternal throws up a number of surprises, and unfortunately, not all of them stick. The levels, whilst designed superbly, are much too long, and the combat, loop, whilst superbly designed, does sometimes get in the way of actual fun. It’s quite easy to die just because you hit the wrong button or unfortunately got trapped in a corner, burning through extra lives in seconds. Even on the default difficulty the game feels a bit too tough. There’s also way too many systems and upgrades, making the game feel too confusing at times, and you’ll spend too long in menus or wandering around your ship between missions. Then the multiplayer, whilst I respect what the team have attempted, doesn’t quite hit the mark either.

None of this is to say Doom Eternal is a bad game; in fact, far from it. The combat and weaponry is exceptional, the visuals and audio presentation just as beautiful and bombastic as you’d expect. There’s a big campaign, the multiplayer is at least worth trying a few times, and there’s the promise of more to come in terms of single-player content. Plus, pre-orders and the deluxe edition also get the surprisingly well-worthwhile Doom 64, which plays much better than I remember (probably because controllers have moved on so much!). All in all, whilst I think a mixture of the surprise factor no longer being there and some of the new features not quite sticking make Doom Eternal less impressive than its predecessor, it’s a very, very worthwhile game that is a more than welcome distraction from the world at the moment.