Necromunda: Hired Gun captures the grimdark Warhammer 40k perfectly, but sadly fails to live up to the beautiful graphics and expansive levels when it comes to the AI and gunplay.

I’ve always been a big fan of the Grimdark world of Warhammer 40k, and it’s been a while since a 40k themed FPS has been on the market, so I was really excited to dig into this one…

Despite the theme of you being a “hired gun” (just a fairly faceless mercenary) with very little backstory, the game at least captures the feel and spirit of the 40k universe possibly better than any game which has gone before.

You’ll quickly come across a number of figures which fans of the tabletop universe will probably recognise, including the famed Bounty Hunter Kal Jericho. Some of the NPCs aren’t written particularly well, but they do at least all look awesome. 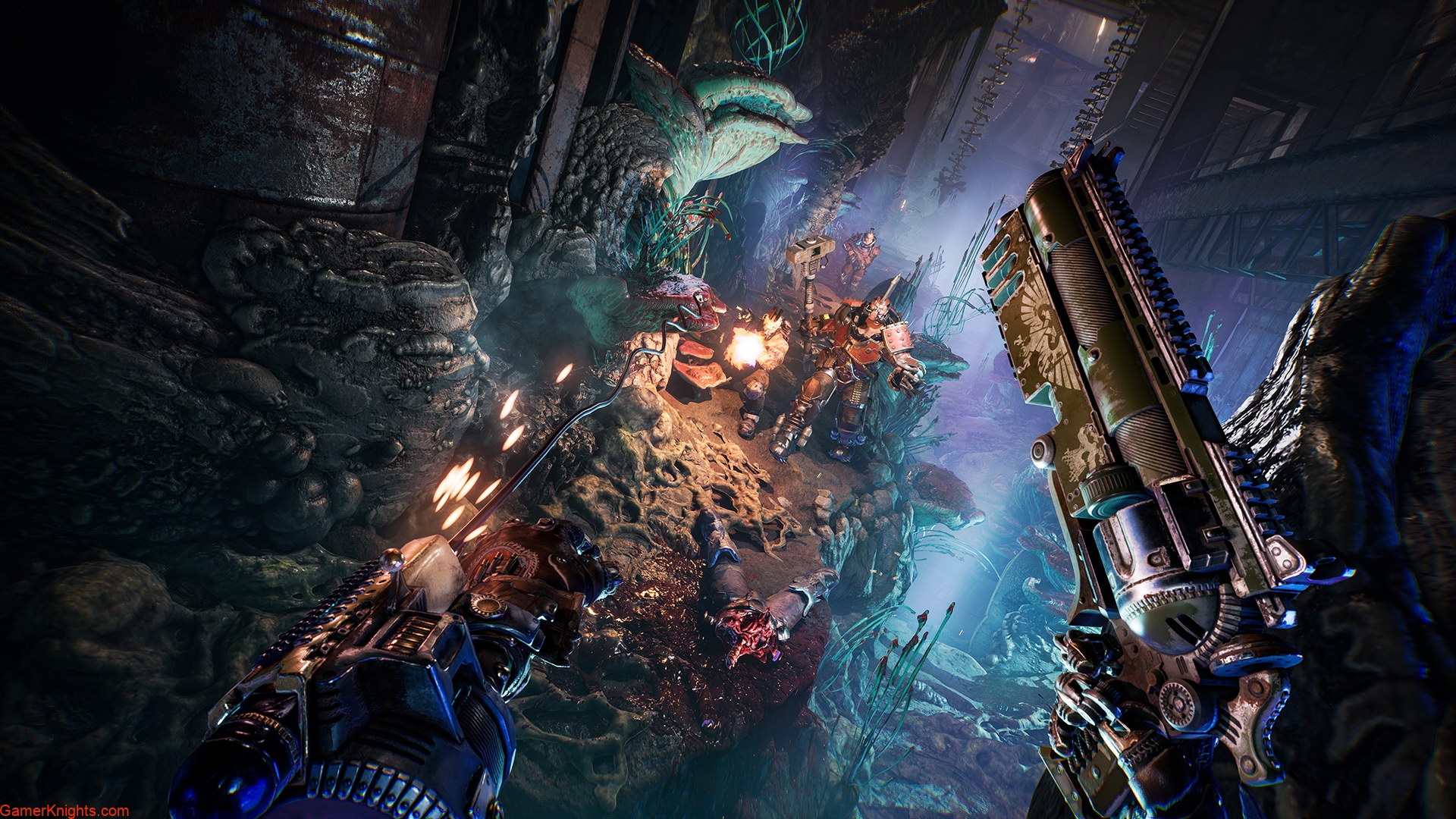 Ultimately though, the story falls a little bit flat. There’s not as much of an overarching theme as I’d like, with most of the missions just being an excuse to go kill various gangs in the underhive. I’d have liked to see your actions have more of an effect on the universe or at least a more coherent reason for the game to exist.

Hired Gun takes an interesting gameplay approach. It’s got the pace and ferocity of Doom Eternal (and whilst you are manoeuvrable, it’s not quite to the same level of Doom Guy). There’s double jumping and wall-running, but you never quite get the laser-sharp feeling of control or confidence that Doom gives you. But then there’s loot and RPG elements and crafting that are more akin to Borderlands, with plenty of guns, armour, and abilities to unlock, and even the opportunity to grind. The reality though, is that Hired Gun aims high but isn’t as ambitious as either individually. Whilst being a single-player game also dilutes from some of the fun and interest in the grind too, especially as the side-missions mostly just replicate some areas and elements from the main campaign. There are achievements to earn, but these will be for the hardcore.

The campaign is 13 levels long, but each level is impressively large, with 30-50 minutes being my average time per story mission, giving you a reasonable 8 or so hours of content before the grind begins. 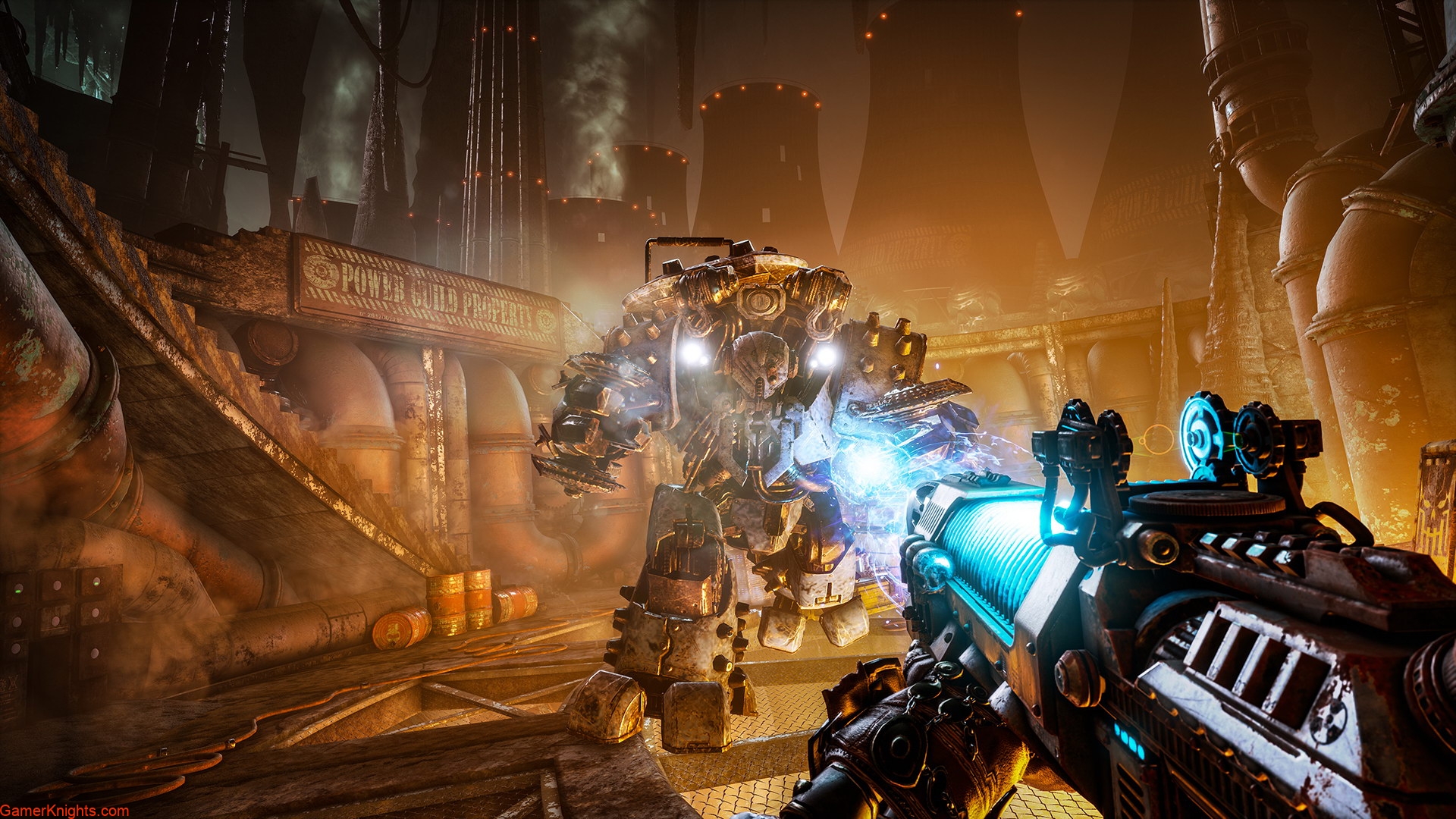 The gunplay is also somewhat lacking, which is a more major concern. The AI is pretty “light”, favouring large numbers of enemies that try to rush you. Bu with plenty of high-powered weapons, abilities, and a takedown option that rarely seems to require you to damage most enemies at all (and renders you invulnerable), combat is fairly mindless for the most part. Tactics normally just rely on you retreating or staffing as possible, whilst the intensity also meant that I rarely used my full arsenal and focused on one weapon per encounter. The one welcome element is your cyber-mastiff companion. Not only can he also be upgraded (which has some nice visual effects), but it has a useful gameplay effect too. Your pooch will highlight nearby enemies, whilst also acting as crowd control by taking some of them out too.