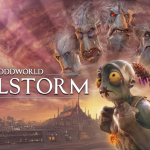 Oddworld: Soulstorm’s wait ends today (the digital version that is). The original sequel to Abe’s Oddysee (later remade as New ‘n’ Tasty) was Abe’s Exoddus, but that was release in 1998 and it only took 9-months to make it. It was not the game Lorne and Sherry McKenna had envisioned to be the true sequel. New ‘n” Tasty released in 2014. A...[Read More]