Turn based tactics games have always seemed cruel, killing off your units for good and punishing foolish mistakes. Early titles lead to the birth of the ‘save-scum’ – saving between every turn so you can easily undo any especially upsetting oopsie-daisies – and the back and forth between developer and player that followed, and the push and pull of systems that either allow or deny such tactics, have long defined the genre.

“Othercide“, from Lightbulb Crew, is a beast of its own. It is a brutal, forgiving take in a genre that rarely allows for such paradoxical approaches to co-exist. Confused? So was I – but then it all began to click together in a wonderful way.

Othercide is a dark game set in a dark world. Playing as an ethereal red woman known as the Mother, you are tasked with taking down an eldritch threat from the other side. A dark, fetid heart seems to beat away in the distance, spewing forth tentacled creatures and creepy plague doctors for you to fight back in defence of your monochromatic world. But you’re not the one doing the fighting: instead, the mother births her daughters from a strange miasma and sends them to do her bidding, to die in her place – and they will die.

Following in the footsteps of titles like Dark Souls, Othercide hides most of its narrative threads and secrets away in its codex entries. Simply focusing on the main story won’t bear much fruit – indeed, I was confused mere minutes into the game and it didn’t get much clearer as I progressed. There’s talk of death and rebirth, and time loops, and otherworldly threats, but it was gussied up with so much beautiful but noncommital storytelling that I soon stopped caring. It’s a shame, as the world of Othercide seems intoxicating, but I don’t go for games that let their poetry get in the way of their prose, as it were. 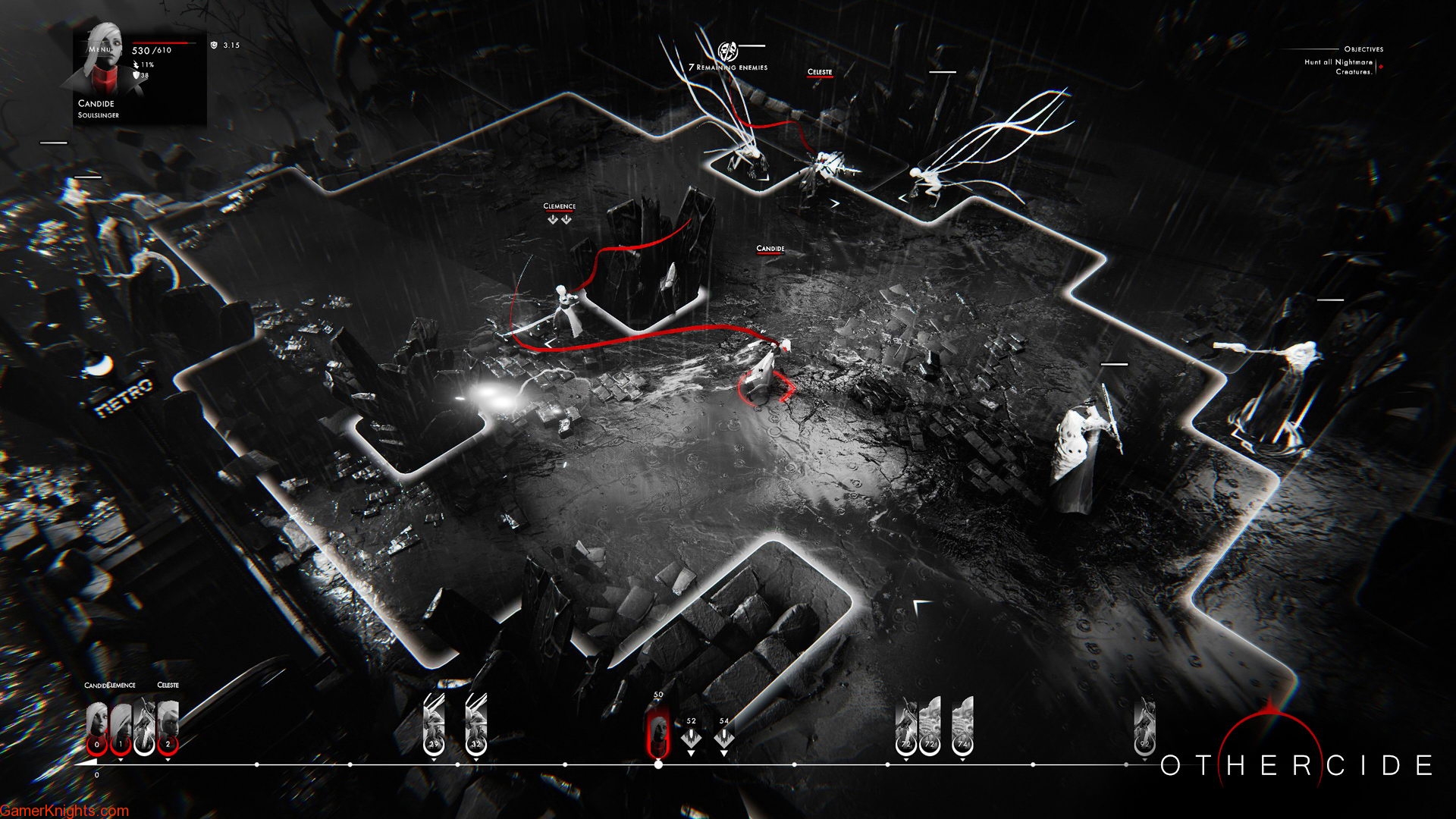 A tactics game in the same vein as titles such as X-Com and Fire Emblem, Othercide sees you sending your daughters against waves of Eldritch horrors and – more often than not – their doom. At first I mistook Othercide for a more leniant game than its contemporaries: units’ health bars were generous, enemies were exploitable, and the randomness that is usually paired with such games was less unfair than in similar titles.

I was wrong. Othercide is wickedly mean at times, and it’s mostly down to the fact that your units don’t recover their health between battles. All those special attacks I’d been using that take off 25 hit points here and 50 hit points there – attacks I’d been spamming with abandon because of how overpowered they seemed – suddenly came home to roost. Within the first two battles, I’d lost two daughters, and their progress with them. It was a quick, easy lesson to learn – and it made sure I played the game wildly different going forwards.

But despite this, Othercide balances its nasty streaks with an incredibly forgiving gameplay loop. It might be the first Tactics Roguelike I’ve played – and by that I mean, you’re supposed to fail. Your first run isn’t going to be a succesful one. But the lessons you learn, and bonuses you unlock by playing it, will make future runs slightly easier to game. Progress will be won in inches, but it feels meaningful all the same. When you fail a run you go back to the beginning of the loop, all your daughters sent to the graveyard, but you can activate upgrades, stat increases and even shortcuts through the game’s levels between rounds. You can revive your favourite daughters for a price – a hard to come by consumable – and in this way progress feels personalised somewhat, never feeling like a completely fresh start. 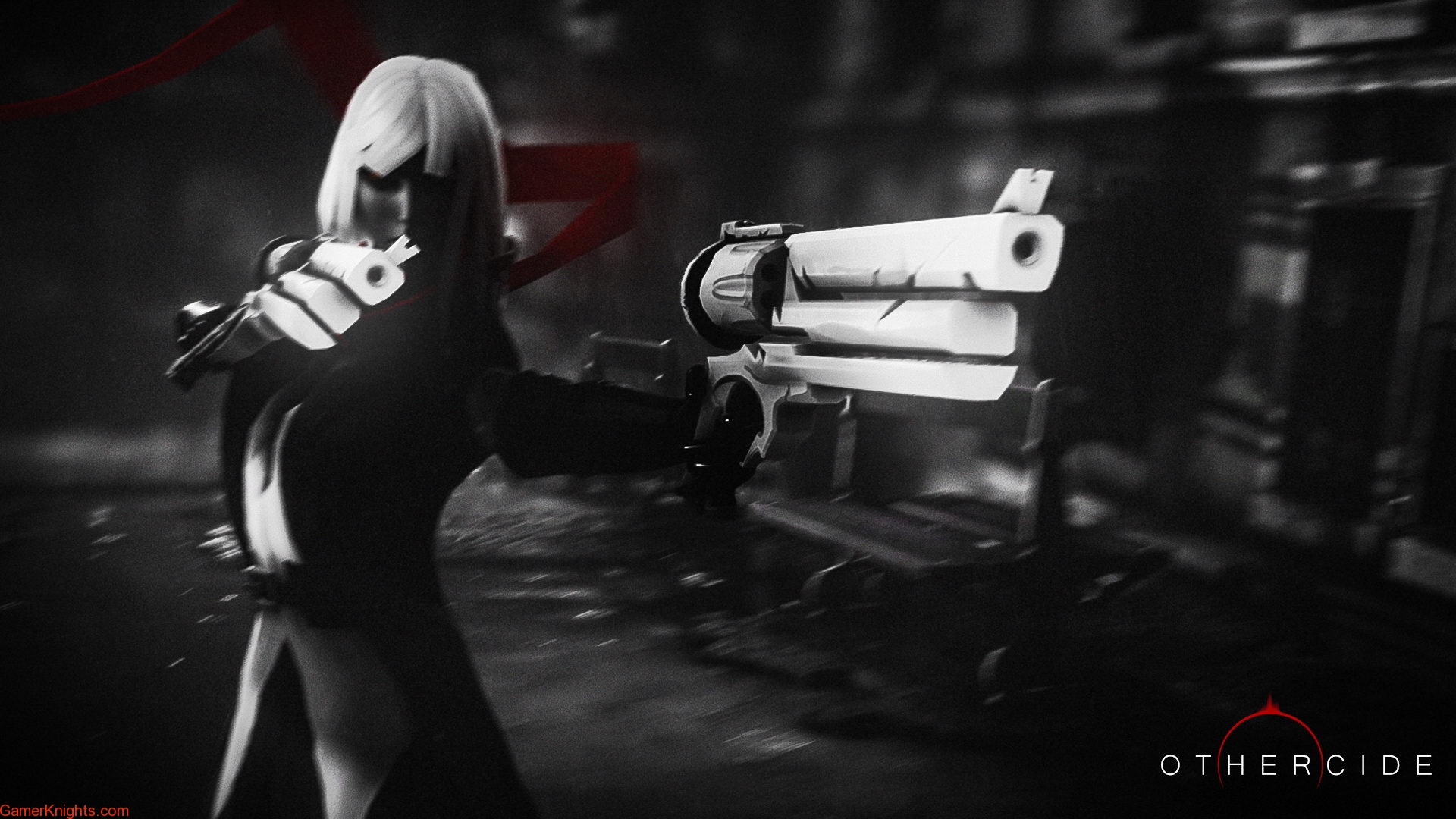 There’s a finely tuned balance at play here to make runs consistently fun, and failure never feel too demoralizing. It’s all neccesary to proceed through the tricky story and its demanding boss fights, and all the failed runs and dead daughters at your feet make it feel fantastic when you finally overcome a roadblock that has halted progress for a couple of playthroughs.