Nintendo is consistently refreshing games from the Wii U era – a console that did not conquer the market for many reasons, but one of them was not the quality of the games available on it.

There were a lot of those from the first league, which, moreover, this consistency in refreshing them is a proof. Sometimes it is enough to make some cosmetic changes, sometimes to change the controls and tweak the visuals.

The more popular platform will provide Pikmin 3 Deluxe the ability to reach much more potential customers. After all, it’s a bit absurd (in a positive sense) in terms of form, but an interesting strategy played in real time – a mix of exploration and management of harvested resources, in which the player controls three funny astronauts commanding colorful groups of the title pints.

Alph, Brittany and Charlie scour the universe to obtain resources for the starving inhabitants of their home planet. They find a promising place where you can gather food in the form of various fruits. However, as it usually happens, you have to get it by chasing away from the local fauna, while solving many problems related to finding and building safe passages through hostile territory. The army of our heroic astronauts, traveling on a multifunctional spaceship, will be the aforementioned pikmines, which, depending on the color they have, specialize in specific skills. 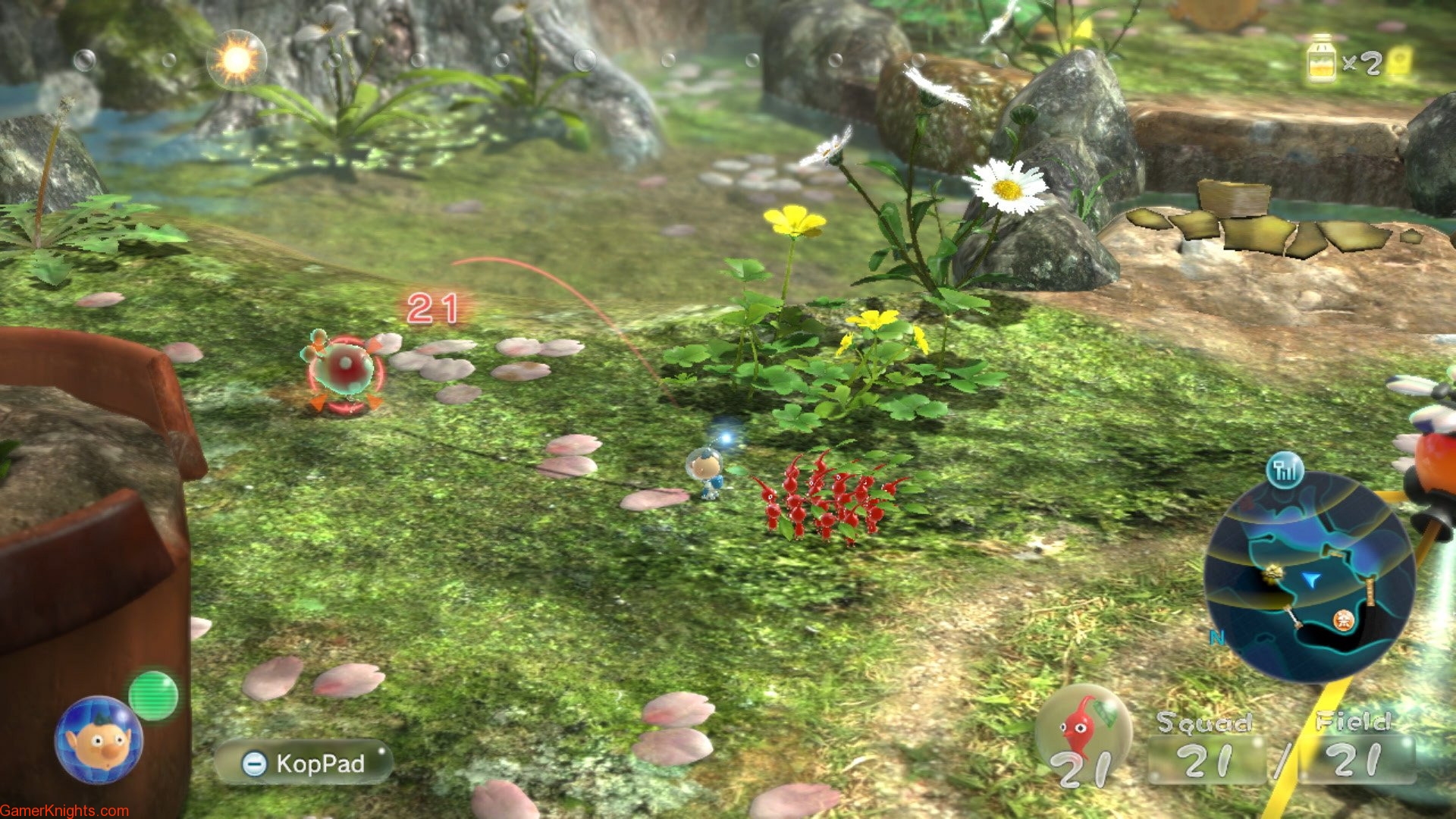 There are several types of Pikminas during the game. The red ones are born warriors, for example, but they will not be able to deal with opponents covered with crystal armor. These, in turn, will be best handled by black creatures, as well as any barriers made of glass or crystal. Yellow pikemen can dig the ground efficiently, but they are also resistant to electricity, they can close all kinds of electrical circuits, and they are more effective in dealing with some representatives of the indigenous fauna that generate electric charges.

If you have not had the opportunity to play with the earlier installments of the series, then you must know that all this crowd travels in the company of our astronauts, who can divide it into separate groups and pass the creatures to each other. In this way, we can create up to three groups exploring the available territory , which is sometimes even necessary to achieve the set goal. In my case, however, it often created a moderately controlled chaos that is difficult to control in any rational way. The more that the gameplay is largely based on the exploration of the terrain, so we don’t always know what awaits us in a few minutes. 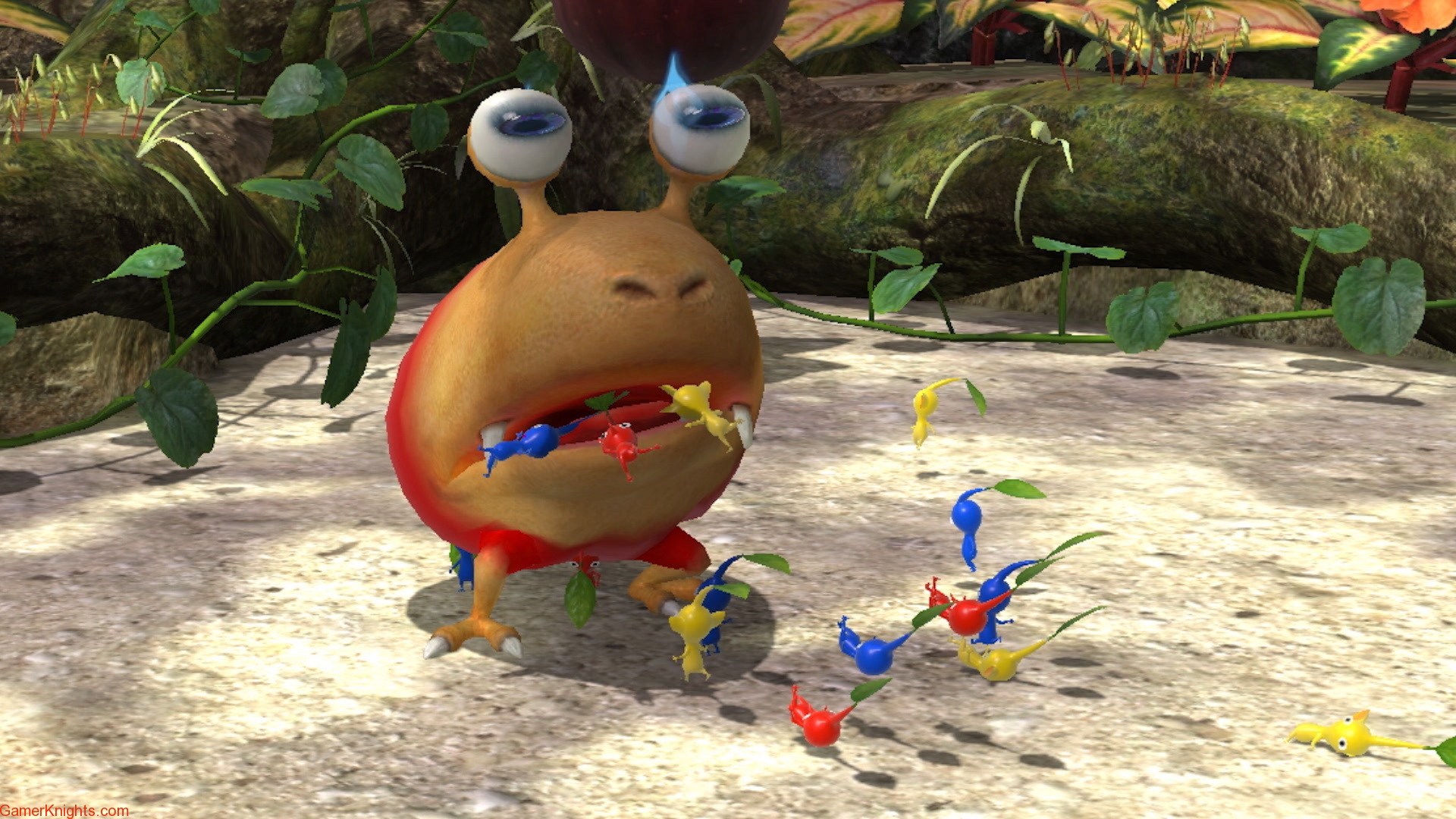 There are levels that cannot be completed in one go- they are simply too big. As time counts in the game and our pupils can only work effectively during the day, and at night they have to hide in their spaceship, we must also take this, sometimes key, factor into account. The pikemen that fail to take shelter in the ship are eaten by predators at night. In turn, the prolonged exploration and conquest of the location consumes our resources, and therefore part of our attention must also be devoted to the search for fruits that are transformed into juices in the rocket, which are the basis of the diet of our brave trio.

The Deluxe version has had several significant improvements compared to its predecessor, offering, among other things, the possibility of playing the entire campaign in a cooperative mode with another person. This significantly affects the smoothness of the game, but I recommend that you try your skills alone first, because apart from the first few missions, which are kind of tutorials, being successful in Pikmin 3 gives you enormous satisfaction . It is a game tailored to allow you to spend time pleasantly with a constantly increasing, but very balanced level of difficulty. As this was my first attempt at the series, I had a great time.