With Red Dead Redemption II, Rockstar redefine the landscape of console gaming effortlessly all over again.

I want to be a cowboy:

Red Dead Redemption was, for the longest time, my favourite Rockstar game. As much as I love the GTA series – and some of the team’s more experimental games such as Bully and Table Tennis – there’s just something about their take on the Western that can’t be beat.

There’s a romanticism to the Wild West that Rockstar somehow bottled in 2010, and in Red Dead Redemption II this magic is both stripped down to a beautiful core and expanded upon in vast, unimaginable ways. They’ve proven this world is just as malleable, and just as demanding of exploration, as their most ambitious games to date.

Without a doubt, Red Dead Redemption II is the company’s best production, and we likely won’t see a title quite like it for a long time to come.

RDR2 is a prequel to the original, set ten years before John Marston ever took up arms against his former gang. Instead we step into the spurs of Arthur Morgan, a rough-and-ready outlaw who rides in the Dutch van der Linde gang. As we’re introduced to both Arthur and the gang itself, they’re holing up in the mountains hiding from the law. They’ve had to get out of dodge fairly quickly after a fudged criminal venture, and as they slowly make their way back to civilization it’s our task to help them get back on their feet, make some cash, and reclaim the loot that was (un)rightfully theirs. 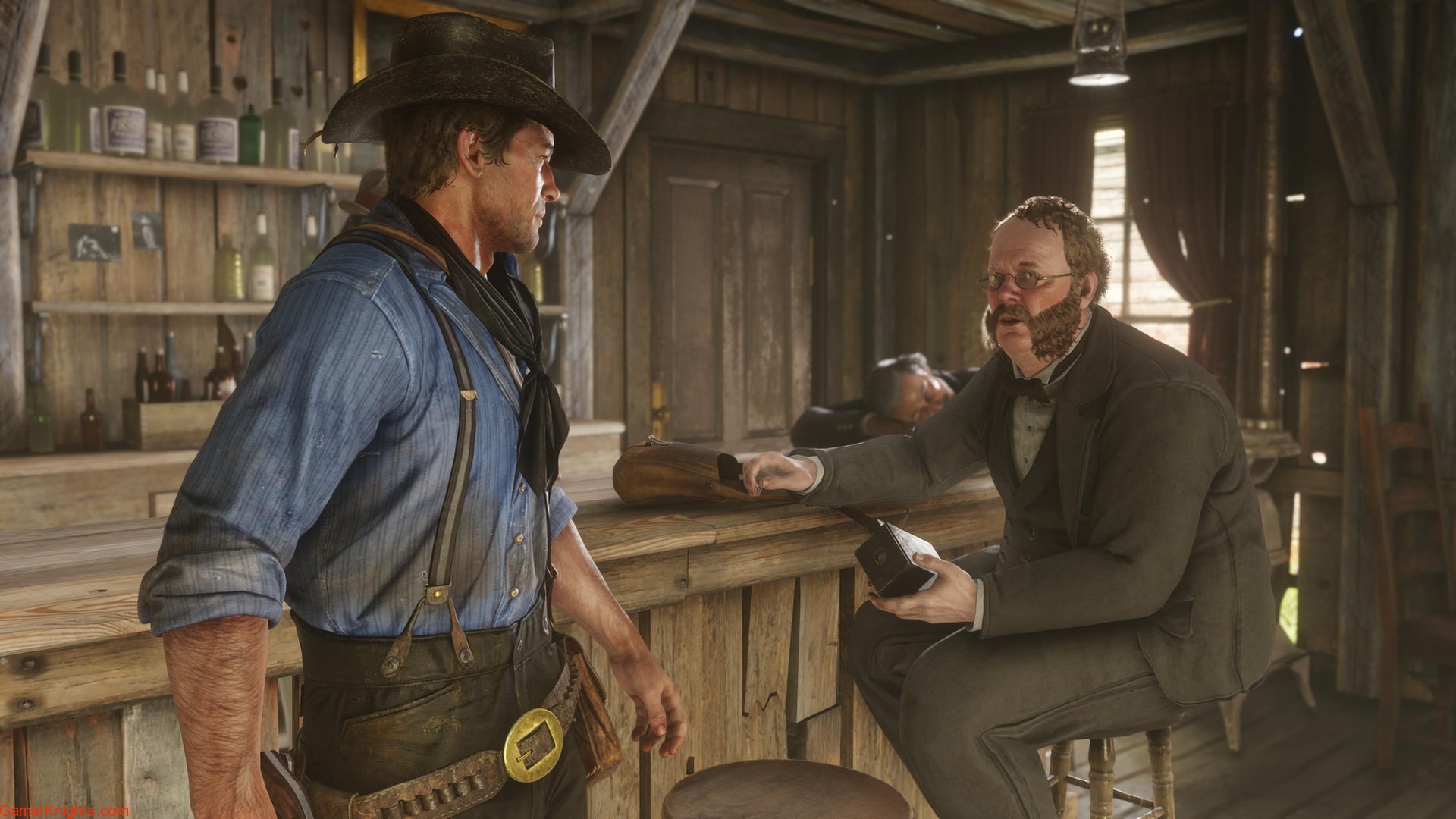 Arthur is a compelling character to play – he’d have to be, after Marston made such an impression nearly ten years ago. I initially thought those shoes would be difficult to fill, but Arthur’s easy to love: he’s grizzled and brutal when he needs to be, but he’s calm and kind and funny and charming and vulnerable and… well, human at others. Through the game’s predetermined moral choices and the more emergent moments that rear their head over RDR2’s mammoth campaign, we get to shape Arthur into the kind of outlaw we want him to be – be it bloodthirsty and vengeful or calm and honourable.

The gang are all fully-formed characters too, with vastly different personalities to get to know. This goes beyond the usual characterization found in typical videogames and middle-of-the-road movies; they aren’t simply stereotypes walking around barking one-liners. The members of your gang feel fully formed and real: Uncle is a kind but lazy oaf who I constantly found napping behind a wagon or drinking on his own, Lenny is quiet but hilarious and desperate to prove himself, Dutch himself radiates danger whether he’s angered or calmly musing in his tent – a precursor to the temperament that will, ten years later, get him in Marston’s bad books.

With such fantastic characters I’m happy to say that the story, with its various twists and turns and developments and excellent, excellent writing throughout, never wastes them. The gang are the heart and soul of the proceedings but the narrative beats that make up the their descent into chaos never quits being an engaging, addictive driving force towards the credits crawl – and that’s no small feat, considering just how long it takes to get there.

Much like its ridiculously ambitious and accomplished storytelling, RDR2’s huge world and multifaceted mix of mechanics are simply stunning to behold. In a game with as many moving parts as this one has it’s difficult to know where to begin.

At its core, RDR2 is an open-world action game like any other: you traverse an impressively sized map, complete missions located at the designated markers and progress the story towards its conclusion. But such a rote description undersells the unbelievable craftsmanship on display in every area of this game. Whilst other games seem to present a checklist of activities to slowly tick off, RDR2 instead presents a world that seems destined to carry on with or without your help, and allows you to partake in as much or as little as you’d like.

Approaching a mission usually sees Arthur walk in on a plan-in-progress, and he’ll organically slot himself into it without missing a beat: a train needs robbing, someone needs breaking out of jail, there’s some ne’er-do-wells who haven’t paid their dues. Of course it’s just an illusion, but often Red Dead makes you feel like if you hadn’t turned up at that exact moment, you’d have missed this mission altogether. Rockstar manage to sell that illusion in a convincing and exciting way – feelings that are doubled down upon once you’re in the missions themselves. Whether you’re pounding after a mark on horseback, having a tense gunfight in the middle of a forest, or just going for drinks at the local saloon, Red Dead feels important – which is weird, considering a lot of the game’s best moments are its least ‘important’ ones. 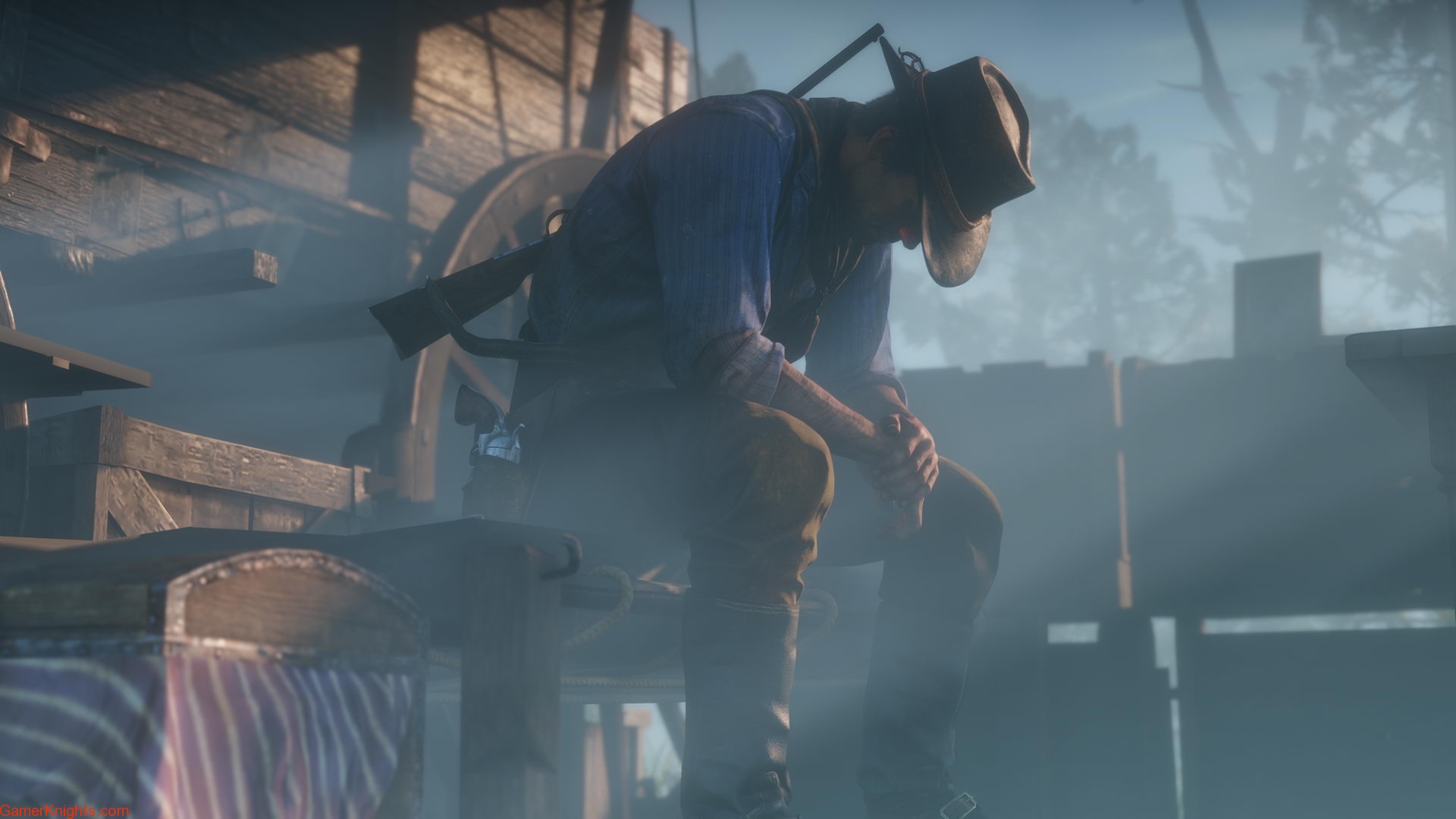 For all the great action sequences Red Dead Redemption 2 provides – and it provides many – the game truly sings in its quieter, more reflective beats. Taking a wagon into town with Uncle and a couple of the girls, or hunting deer for the camps dinner, or going to visit an old flame in a neighbouring town, these are the moments that will stay with me far longer than any of the impressive gun slinging matches with rival gangs or the high-stakes robberies. It’s in these quieter moments that RDR2 proves that it’s so much more than ‘a cowboy game’. Instead, it’s a moment in time that none of us would be allowed to explore otherwise, and it truly lets you explore it. After sixty hours with RDR2, I feel like I’ve lived in that world, fully immersed myself in its slow pace and it’s beautiful moment to moment gameplay, and for the best of them I rarely had a gun in my hand.

It’s this pace that concerns me as a reviewer, however, when it comes to Red Dead Redemption 2. As phenomenal as this game is, I don’t believe it’s for everyone. Every gamer doesn’t play games for the same reasons, and whilst I loved losing myself in Red Dead’s Wild West I know that plenty of players will not have enough time or patience to give themselves to the game in the way it asks. Red Dead’s myriad systems – cores that measure the overall fitness and wellbeing of not just Arthur but his horse, his camp and his people – will likely put some people off. Often it feels like these interlocking systems are perhaps too complex – maybe needlessly so – but once you’re in they simply become a way to read the game’s impressively detailed engine chugging beneath the surface.
If an entire day spent achieving nothing of trackable worth – hunting and gathering camp supplies, washing, shaving and dressing Arthur, simply riding over to the next town at a pace that won’t harm your trusty steed – sound like activities that could bore you, I’d advise you read further into what Rockstar demand of you, as a player, if you’re to fully enjoy this game. Because whilst they’ve done the lion’s share of the work in crafting a believable world for you to inhabit over the course of the next few weeks or even months, Red Dead certainly expects you to put in your fair share of graft.