After 30 years of making Mario, Nintendo have finally put the tools to follow in their footsteps in our hands, and the results are brilliant.

Thirty Years in the Making:

“Super Mario Maker” is a very special game, and quite unlike anything Nintendo have produced before. This build-it-yourself Mario game is the culmination of dozens of experiments and evolutions that Nintendo as a company have gone through in the last few years, and it’s a very promising sign of things to come.

Super Mario Maker wouldn’t exist without the foundations that Nintendo have been laying for years: finally the company are embracing online systems and communities. Games like Mario Kart 8, Super Smash Bros. and Splatoon have all entertained integral and enjoyable online systems, and the Miiverse – a community forum where players can share screenshots, comments, helpful tips and even their own art – has been the bedrock for all of that. Whilst Nintendo were by no means pioneers with their belated acceptance of the new age of online, they have truly come into their own since the launch of the Wii U.

Elsewhere, experimental projects like the NES Remix series have given the company new confidence in mixing up their tried-and-tested game formulas, leading Nintendo to finally give control of their biggest property over to you, the player. Super Mario Maker is at once a celebration of Mario’s thirty year lineage and an explosion of new ideas to carry us into the next thirty. SMM may tell the story of how Mario got to where he is today, but it’s the promise of where he is going that is truly exciting.

Super Mario Maker is a canvas, a toybox and, ultimately, a great video game all at once. Much like LittleBigPlanet and its user-created-content ilk, Super Mario Maker puts the tools to make fantastic levels in your hands. Whilst other level editors I’ve played with in the past feel daunting and complex, SMM delivers the best creation suite I’ve ever seen by paring down a lot of these complications (without sacrificing depth) and making it easy for anyone to make a brilliant level.

Nearly every item, enemy and stage element from thirty years of 2D Mario games is here to use in your own levels, and it’s fantastic fun to mess around with these endless combinations and turn classic Mario design on its head. Most everything here can be played with or altered in some way too, and it’s this sense of fun and whimsy that Nintendo inject into every element of Super Mario Maker that truly elevates it. They want you to play around with the creation suite, find out secrets, shake everything and see if it transforms into something new – it’s this experimentalism that makes creation just as much fun, just as much ‘a game’ as playing the levels themselves. 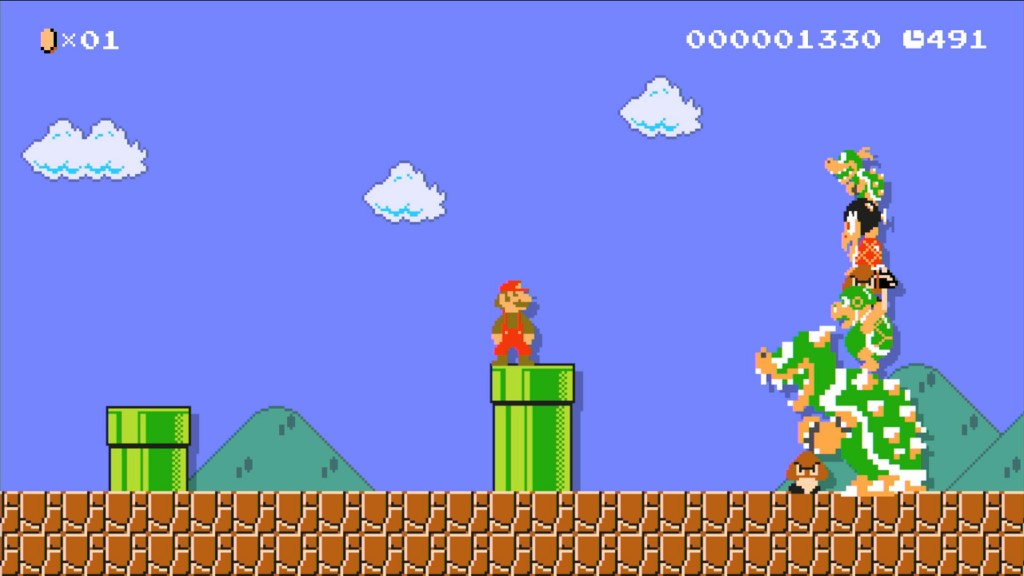 My one complaint with Super Mario Maker is the annoying way it introduces and offers new stage elements to players. These item packs are doled out bit by bit over the first ten days of play, and whilst this drip-feed wont ultimately matter in the long run, once everyone’s had the game for a couple of weeks, it actually stunted my creativity countless times when I was first falling in love with the title. Whilst I agree it’s vital not to overwhelm a player by giving them everything at once, I wish these items had been offered as rewards for completing certain levels that included them, or even just based off of playtime. It was frustrating playing stages that incorporated a cool new item or an interactive stage hazard and not being able to run off and use those same ideas in my levels until an arbitrary amount of time had passed.

A huge part of what makes Super Mario Maker easy to pick up and play is the integration of the Wii U’s unique touchscreen controller. Instead of awkwardly moving your reticule around the screen you can draw directly onto it, crafting elaborate stages in minutes. The off-tv play function even allowed me to be crafting stages whilst the TV was in use. Drawing elaborate platform sections with my stylus, dropping row upon row of Goomba into them and dotting fire hazards around a stage is ridiculously easy and fluid, and it’s this ease of use that made Super Mario Maker an absolute joy to mess around with.

Of course, creation is just the start of Super Mario Maker. When booting the game up you’re greeted with two options, Create or Play. The latter allows you to hop online and try out the creations of players around the globe. Populated entirely by the devilish machinations of your friends, family and the world at large, Mario Maker is positively brimming with great user made levels, even in these early days. 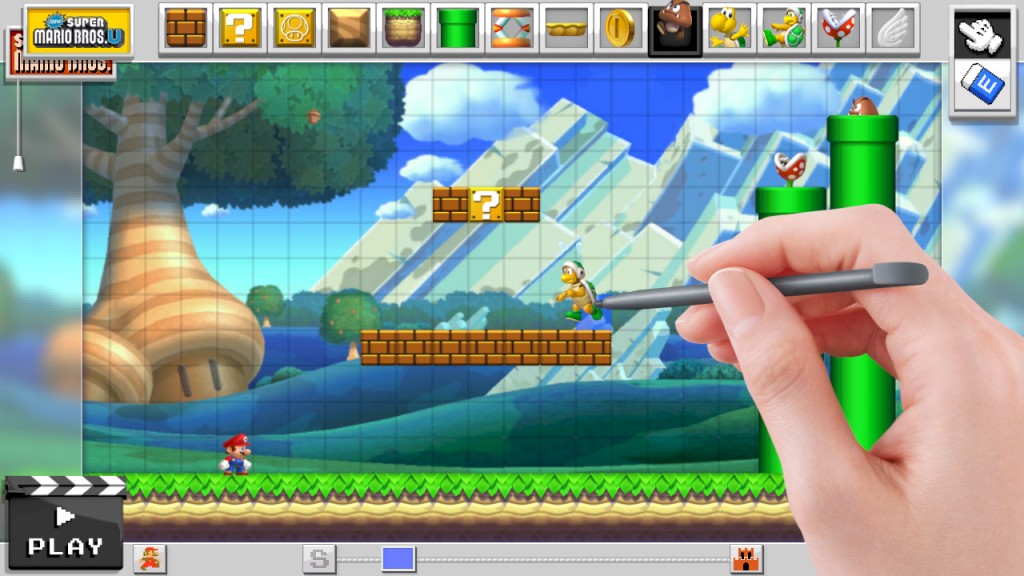 There’s a tendency towards ridiculously difficult levels here, creations that Nintendo would never greenlight themselves were they making a by-the-numbers Mario game, but that some stranger in Minneapolis thought was an okay level of challenge. It’s almost always not. There’s also a whole lot of fantastic and unbelievably inventive levels that take standard Mario tropes and subvert them in new and interesting ways. A level where you had to guide a bullet bill from one end of a stage to another just so you could use him to bounce over a gap had me agape throughout its entirety, whilst others cast you as a Goomba and task you to take out your entire family.