You don’t have to know a thing about videogames to know exactly who Mario is and what he’s famous for. Nintendo’s iconic icon is the star of gaming’s most storied series, and yet they never seem to let the plucky plumber sit still for a moment: whilst most developers might rest on their laurels with a formula as successful as Mario’s, the Kyoto giant strives to push the series in new directions constantly.

Odyssey, Mario’s debut on a new console that’s as playful as his games, epitomizes that drive to never sit still, to throw a hundred great ideas against a wall and watch them all stick. It’s Nintendo through and through, buoyed by countless hours of fascinating, innovative game design. It’s an absolute masterpiece, and one of the most fun games I’ve ever played.

This time, Bowser has gone too far. Mario and I have put up with him for over thirty years because, whilst he’s constantly kidnapping Princess Peach, he’s done it seemingly for the sake of it. His motivation was always short sighted and two dimensional – his bad-guy drive was so cartoonishly evil it was almost innocent, in a way. On his latest kidnapping escapade, however, Bowser has upped the ante by forcing our favourite Toadstool to marry him, and that’s messed up.

Our dutiful lead sets out to amend this most heinous plot with companion du jour Cappy – a sentient incarnation of Mario’s infamous hat complete with eyes, attitude and a penchant for possession. By hurling his trusty hat at enemies and allies alike, Mario is able to inhabit their body and – if you’re anything like me – fling it repeatedly into lava, poison swamps, hot soup and various other stage hazards. Using the powers and abilities of these new hosts, Mario is able to chase Bowser across a wonderfully constructed world of increasingly diverse and interesting locales to put an end to his nefarious plot.

There’s a real emphasis on travel, here, with each shiny Moon you collect adding to the power of the Odyssey, Mario’s ship base. Hey, Bowser’s had an Airship since SMB3, it’s about time we took to the skies to chase him down. Each world you visit has an adorable pamphlet map with fun facts about the location and must-see landmarks and sights, and you can even collect Passport stamps to adorn your ship with as you venture around the world. Collecting world-specific currency also allows you to kit Mario out in a variety of different outfits, which is way too much fun to mess around with. It’s a journey worthy of the name Odyssey, and finally addresses the fact that Mario is a world traveller who’s been to more desert levels than Lawrence of Arabia. 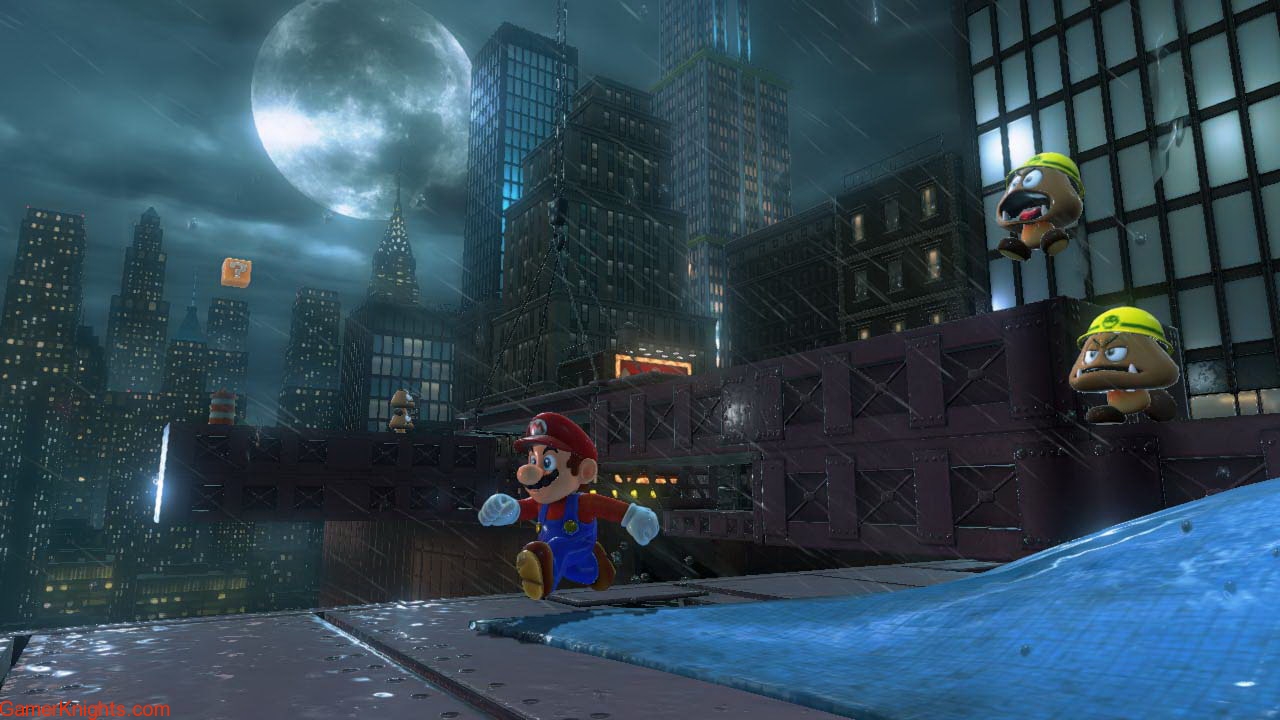 As a story it’s much the same one we’ve been playing for over three decades now – defeat the bad guy and rescue the princess – and Odyssey spends very little time getting in the way of its gameplay to try and be anything else. It knows we’re here to stomp Goombas and grab coins. But as a presentation, Mario Odyssey is the series’ best to date. Within its brief cutscenes, wonderful world building and endless throwbacks to Mario’s long and diverse past Odyssey seeks to celebrate the history of the franchise whilst simultaneously overflowing with new, varied content. From his days known only as Jumpman, rescuing OG damsel Pauline from the clutches of Donkey Kong, to his escapades as a cat, Nintendo have crammed so many nostalgic callbacks to countless games that I genuinely couldn’t keep up. Odyssey might front that it’s telling the story of a man rescuing a princess, but underneath that bubblegum exterior its celebrating thirty-plus years of rescuing princesses, and it’s an absolute blast.

Mario’s new Kirby-like ability to become his enemies serves him well, and entirely replaces the themed power ups we’ve all become accustomed to. In twenty-something hours of platforming I never once punched a block to reveal a Fire Flower, Tanuki Suit or Mushroom. Instead, the enemies I inhabited lent me their abilities of fireball-flinging, flight or getting really really big, respectively. With around fifty different bad-guys to become, Mario’s potential is overwhelming.

Thankfully, every single creature controls wonderfully, with easy, intuitive movesets, meaning that no matter what you become nothing feels clunky or confusing.
This wide, borrowed moveset – on top of Mario’s own comprehensive list of flips, dives, rolls and somersaults, the entire suite of which is wonderfully fun to play around with – allows for more platforming potential than ever before. Odyssey boasts a huge amount of content, none of which feels unimportant or boring. Every challenge is finely tuned and wildly different from what’s come before, and the game revels in throwing collectibles at you for your successes or curiosity.

With my own lukewarm reception to Yooka-Laylee earlier in the year, I thought collectathons might be done for good. Odyssey shatters that notion with a reported 999 Moons to collect (I say reported because, even after finishing the game, I’m only at around a quarter of that number). Most importantly, Mario Odyssey’s constant drip-feed of goodies never feels anything but satisfying. I relished poking around suspicious landmarks, seemingly going out of the intended play space and pushing the boundaries of what I thought Odyssey would expect of me because I was constantly rewarded for doing so in increasingly playful ways. I played through most of Odyssey with a huge grin on my face, because no matter how I tried to second-guess Nintendo they were always one step ahead, hiding away another Power Moon behind a fake wall or atop a challenging climb up a Skyscraper. 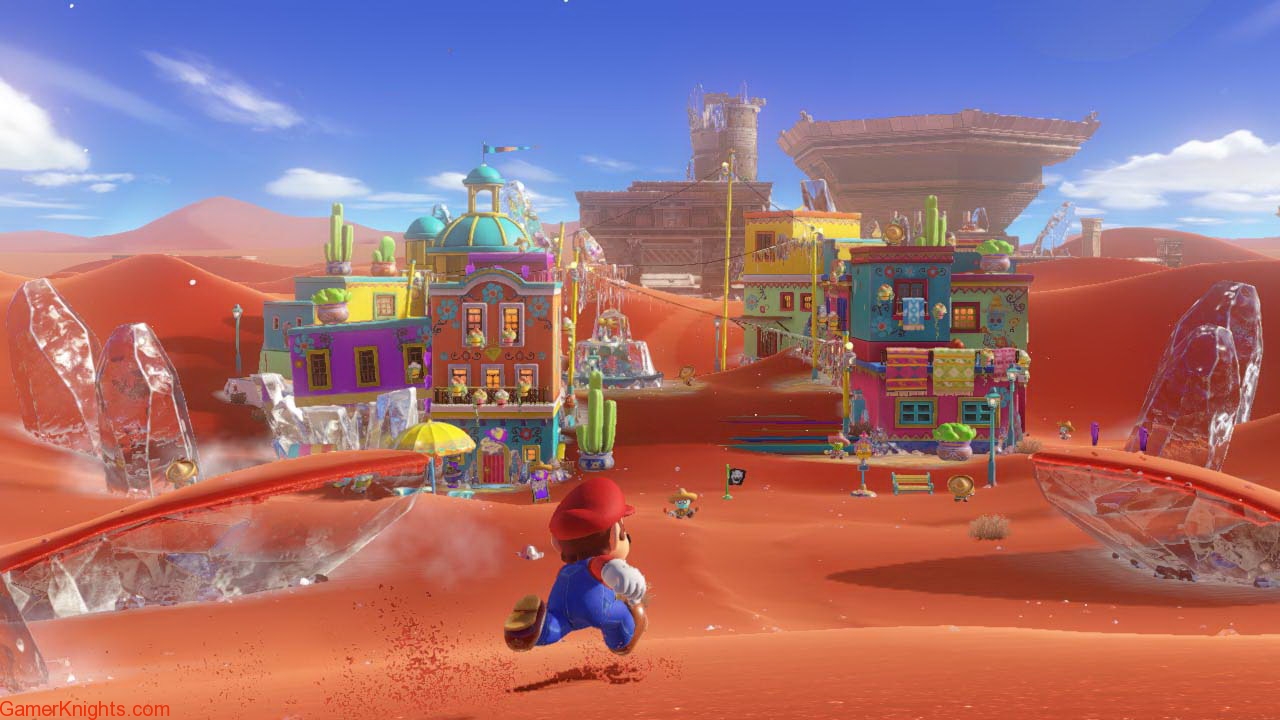 Odyssey never runs out of ways to feel fresh. It plays with notions that have come before, but for the most part every twist on its staple platforming feels surprisingly new and always fun. Challenges shift wildly depending on how you tackle them as well. Nintendo haven’t shied away from letting players break their challenges depending on what creature they approach them as – gauntlets of tricky spinning platforms became a joke as I bypassed them as a lava blob below, for instance, but none of my homemade solutions ever felt like something Nintendo hadn’t foreseen in some way. Much like with Breath of the Wild before it, Nintendo have made a play-space with numerous moving parts and encourage you to get silly with the possibilities, and the title sings because of this freedom.