Borderlands 2 didn’t exactly have the greatest story. With lacklustre humour and a poor lead enemy in Handsome Jack, I wasn’t really sure why Telltale announced Tales from the Borderlands. Does the game live up to my initial fears?

When the game starts up, I was worried – the game is making loads of references to Hyperion, Handsome Jack and there wasn’t a ClapTrap in sight. But my fears were unfounded – Zer0 Sum is a really good tale about betrayal, corporate hypocrisy and screwing everyone else over, told from a couple of different perspectives. It’s genuinely funny, and ends with enough of a cliffhanger to make me really interested to see what’s coming next from the developer team.

Whilst it’s nice to see a Telltale game with a bit more humour than some of its more recent efforts, there certainly isn’t any real attempt to innovate on the gameplay front. Like Game of Thrones, Wolf Among Us and the second series of The Walking Dead, Tales from the Borderlands is more interactive story than actual game. Even basic movement has been all but removed from this episode, and searching for things has been rendered totally unnecessary by the main protagonist’s ability to enter a scan mode where objects of interest can be highlighted easily. There’s pretty much nothing in the way of puzzles either – this is the tried-and-tested dialogue choices and QTE-heavy style of Telltale game predominantly. 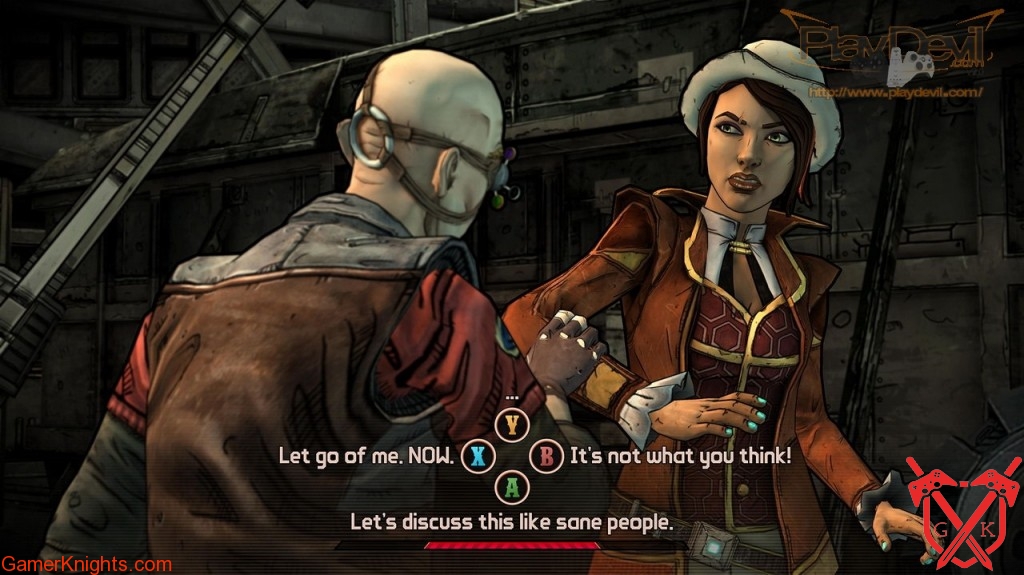 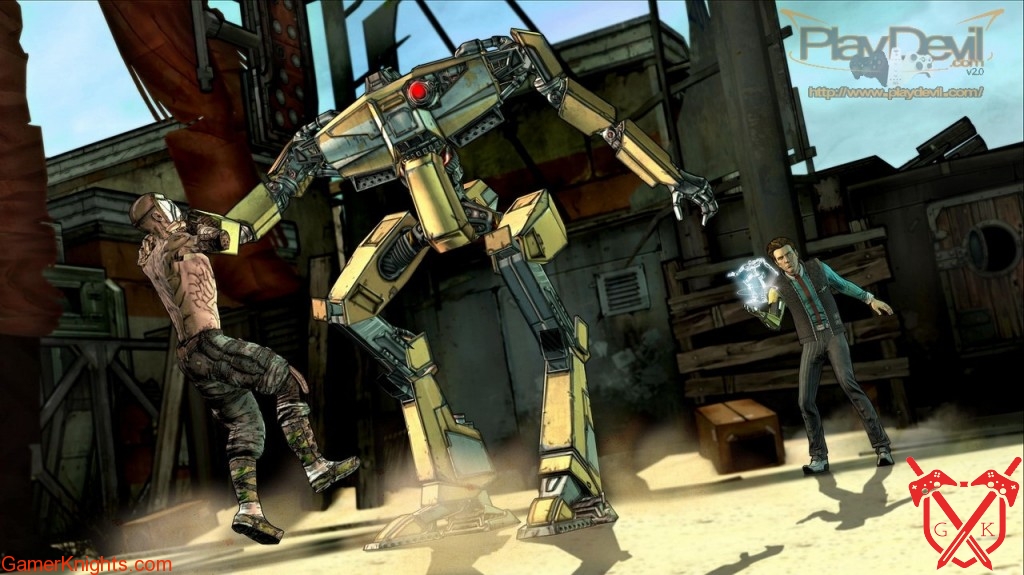 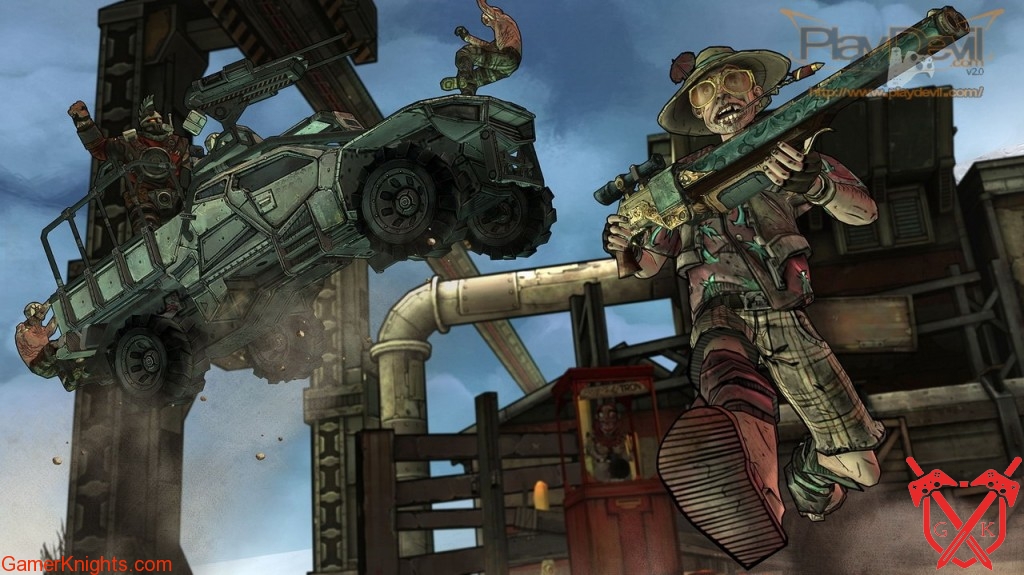 Personally I don’t have a problem with this though, the story was engaging, the dialogue choices, whilst still being ‘difficult’, were a little bit lighter than other Telltale games, and allows you to concentrate a little bit more on the alluring cast of characters, including my favourite, Vasquez, a wonderfully sleazy corporate goon who spends more time on his carefully coiffured beard and hair than actually doing any work. Zer0 Sum is not the longest episode that Telltale have ever put out, but it will still last you a good couple of hours, so represents decent value for the £4 asking price (especially now the PS4 version is now at price parity with the other versions of the game).

The cartoon style of the Telltale engine suits TftB really well – in fact, it’s a much closer match than I originally envisioned, looking very close to the Gearbox game indeed. What’s a nice touch though is that the UI has been redesigned with Borderlands styles, with all the right fonts, logos and shapes creeping into the choices you make. Some scenes do seem to tax the engine a little – it’s clear that it’s not designed to show off cars moving at speed, for example, but overall the game looks really decent and doesn’t suffer from some of the performance issues that other games in the Telltale catalogue have done on the current consoles. 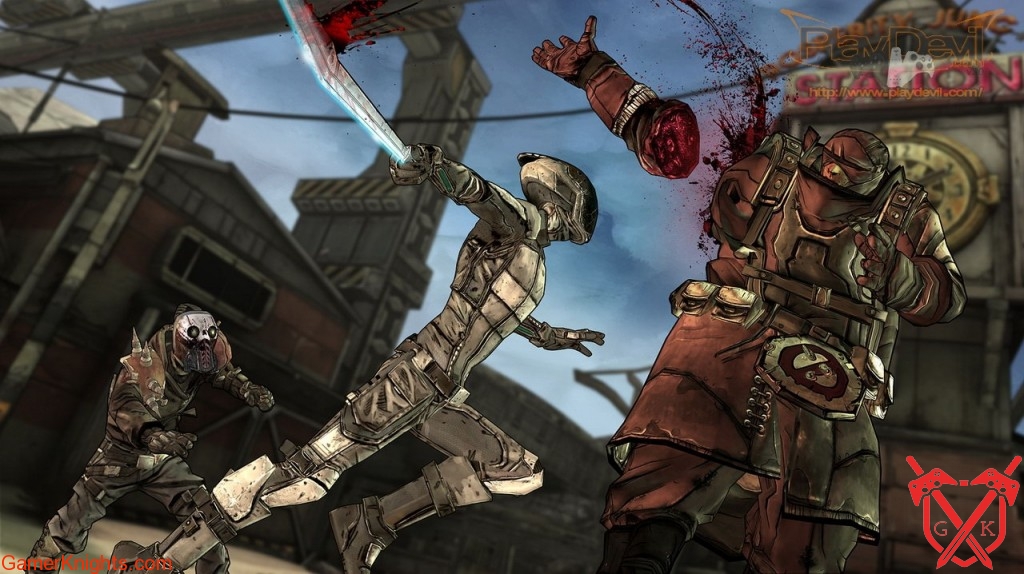 As ever, the episode is fully voiced, and the cast do a really good job of bringing the Borderlands universe to life, and reinforce the humour of the script. Unusually for Telltale, there’s also some really good use of licensed music at a couple of points during the episode which really adds to the flavour.

Tales from the Borderlands completely surpassed my expectations, and also proved that Telltale hasn’t forgotten how to do humour in an adventure game after a few years off from lighter material. For those hoping that it may also herald a return to the more old-school gameplay of Sam & Max or Monkey Island, you’ll probably leave disappointed. But for those who enjoy the interactive storytelling that Telltale’s games have become, Episode 1 of Tales from the Borderlands is the studio’s strongest start to a new game since the first Episode of the Walking Dead, and that’s great news for everyone.