The Forest makes a strange first impression. Despite living in the shadowy realms of Steam’s early access for a long stretch of time, it’s launched in its finished version on consoles in a strange – but not unenjoyable – state. The title sees you trying to carve out a place for yourself on an increasingly treacherous island, but does the game end up being a home away from home or a holiday from hell?

Following a plane crash on a definitely-not-deserted desert island, your son is taken by the locals – greased up, terrifying, ritualistic savages who wear body parts as armour and make horrifying effigies out of the cabin crew. As far as a narrative goes, that’s it.

To its credit, the game is true to this goal. In your ‘to-do’ list one accomplishment sits above all others: Find Timmy. But accomplishing this goal isn’t quite as straightforward. In my mad dash to rescue my son, I built an entire village from the ground up, cultivated an agricultural monopoly, and murdered about four hundred of the island’s inhabitants. Because besides your overall goal, The Forest is pretty free-form in how it lets you play.

Much like most survival sims, The Forest quickly lets go of your hand. After all, learning about and coming to grips with a game in this genre is part of the charm and almost all of the fun. Initially the experience was utterly wretched: in my first in-game life I managed to run the entire length of the island not knowing what the hell I was supposed to be doing, fell into a cave that I felt I was definitely not supposed to be in, then continued to fall beneath the geometry of the world and then got skyrocketed up above the island in a glitch that, whilst funny, was annoying (and death inducing) and I quickly turned the game off in a huff. The learning curves of these games can be quite taxing, at times, and so I came back prepared. 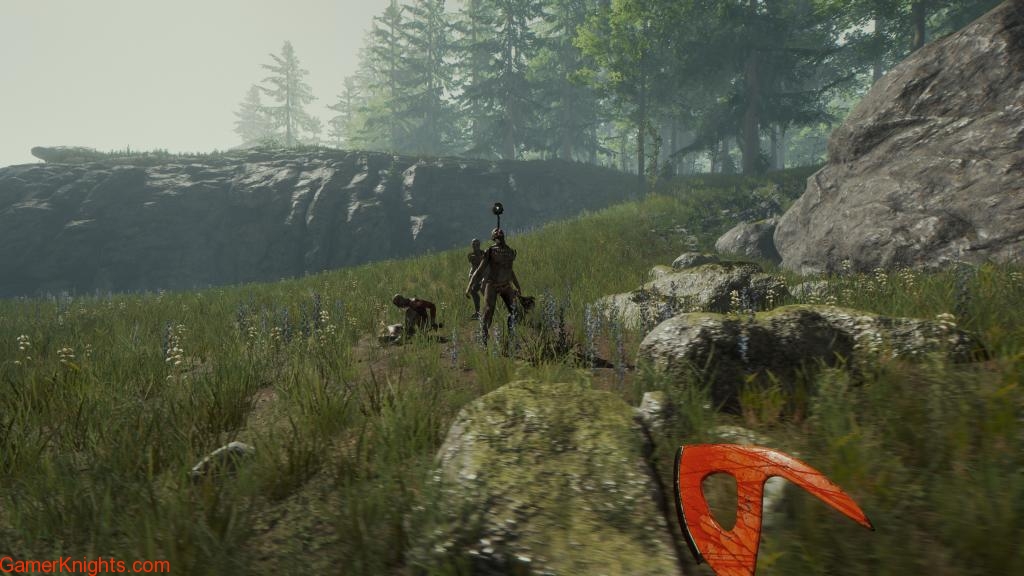 With a friend in tow (you can play the game with up to four people) the nefarious island was a lot more inviting. We still bungled our way through our first day, coming to grips with the games many mechanics and idiosyncrasies, wasting away time we should have really spent building a shelter for the night. As a storm rolled in and darkness fell, we made a mad dash to erect a makeshift tent in order to survive our first night – made harder still by the island savages finally showing up to torment us even further. It reminded me of my first time with Minecraft, and as far as genre comparisons go that has to be one of the most flattering.

Despite the game’s insistent goal of rescuing your son (which you think would take priority), The Forest is perfectly happy to let you do whatever you want – though it will throw plenty of obstacles at you no matter what you choose to do. My partner and I settled on building a village atop the trees (as ground-based dwellings seemed to come with the threat of midnight cannibal calls) and we fell into the satisfying build loop of gathering resources and crafting our empire. 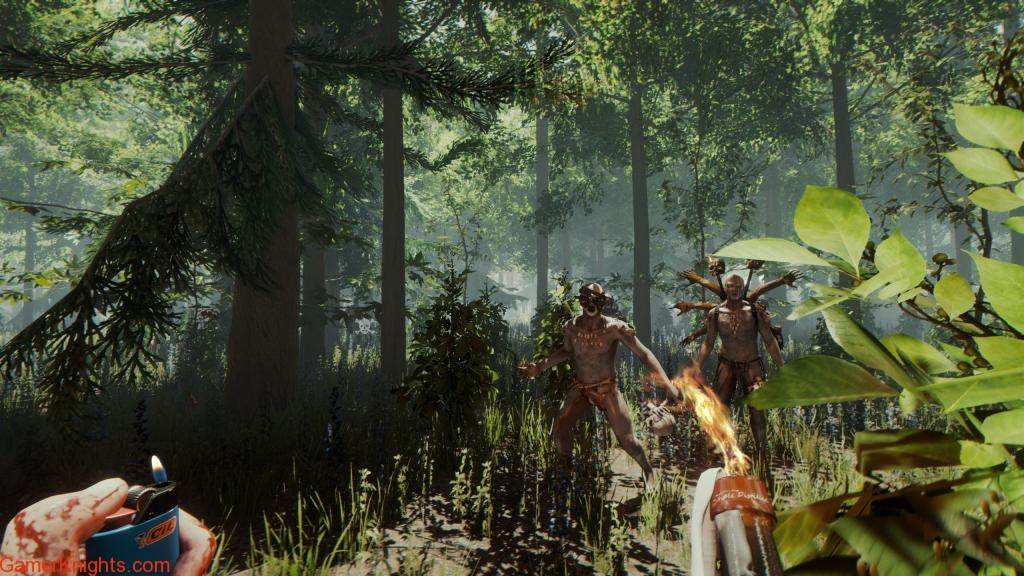 Once you’re comfortable with life above ground, the game has one obvious destination: the underground cave systems that make up the island’s underbelly. This seems to be home to all sorts of monstrosities – far more than the simple cannibals that are relegated to a bit of a nuisance above ground. It’s here where the game ventures into Silent Hill territory, but to say much more would be to spoil it. For those brave enough to venture into the game’s depths, there’s plenty here to keep you up at night.

The Forest is a somewhat simple looking game, no doubt thanks to just how user-generated things can get. It’s not an ugly game by any means, but graphically it won’t knock your socks off. Simple textures, ugly pop-in and some very strange visual glitches spoil the overall look, but there are plenty of interesting design choices (I loved the cannibals making armour out of the plane wreckage and necklaces of CDs) and moody lighting effects to make sure your stay on the island is a memorable one. 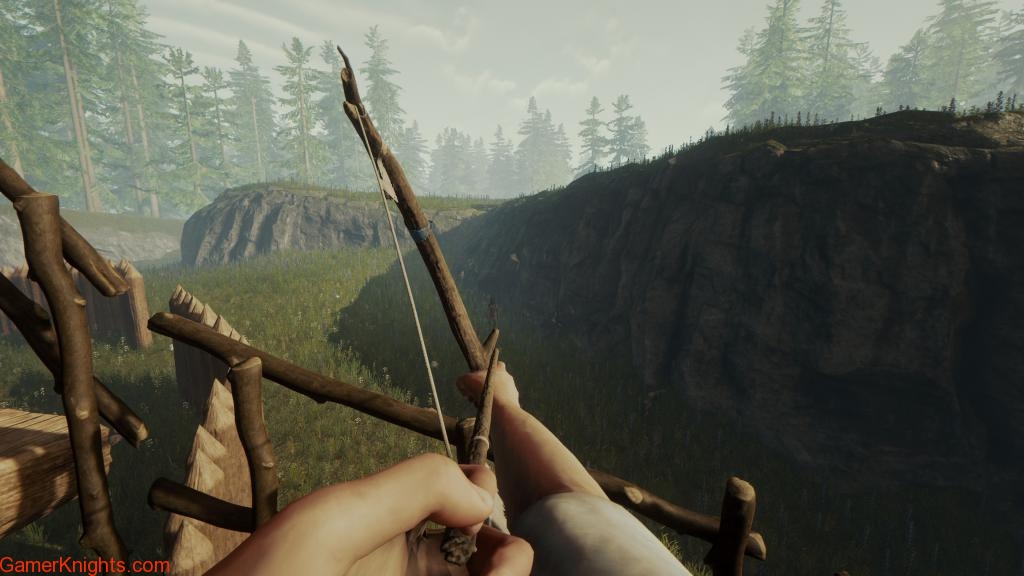 The sound design is pretty fantastic, however. The simple sound effects of building lend a tactility to your craftsmanship that makes everything much more satisfying, but it’s the sounds of the horrors deep in the woods, creaking out to you in the middle of a regular day, that put me on edge every time. Down in the caves this is ramped up tenfold, with untold nightmares crooning to me in the darkness. Very creepy stuff.

‘The Forest‘ is a standoffish game that demands a lot from its players – much like any survival sim – but it’s one that’s ultimately worth coming to grips with. Despite some annoying glitches and a steep learning curve, the myriad of monstrosities this game has in store for you is well worth the price of admission.