A Breath of Fresh Air:

It’s difficult to talk about the “Legend of Zelda: Breath of the Wild” in a professional manner. It’s hard to be objective when all I want to do is gush. But even as I write this opening, I know that Nintendo’s latest will be my highest scored review on ‘GamerKnights’. It’s just that good. Having just come off countless consecutive sleepless nights staying up and exploring Hyrule it would be unfair to say ‘It’s Nintendo’s best game ever!’ – I need some distance before I can truly make that call – but to even be thinking that is extremely high praise indeed.

I can however say this without a doubt: If you consider yourself a gamer in any capacity, you owe it to yourself to play Breath of the Wild – it’s one of the purest games I’ve ever played.

Breath of the Wild throws the Zelda rulebook out of the window, and its in this process of completely rebuilding its core formula from that ground up that Nintendo have crafted something truly stunning. This brave new vision is arguably most evident in the game’s approach to story-telling and progression. Ever since a Link to the Past the Zelda series has become increasingly forceful with its narrative progression, with the latest console Zelda experience – Skyward Sword – constantly locking players out of the fun by taking away control for a frankly offensive amount of cutscenes and – worst of all – tutorials and tool tips, right up until the end game.

In Breath of the Wild, you’re thrown into the expansive open world in minutes, free to do what you please upon the game’s opening plateau. Should you follow a couple of hints given by an old man you can be out of this tutorial area within the hour, and from there you might not see another critical-path cutscene for upwards of twenty hours. Once you glide off the Plateau and into Hyrule proper, its yours to explore as you wish, and its scale is simply breathtaking. 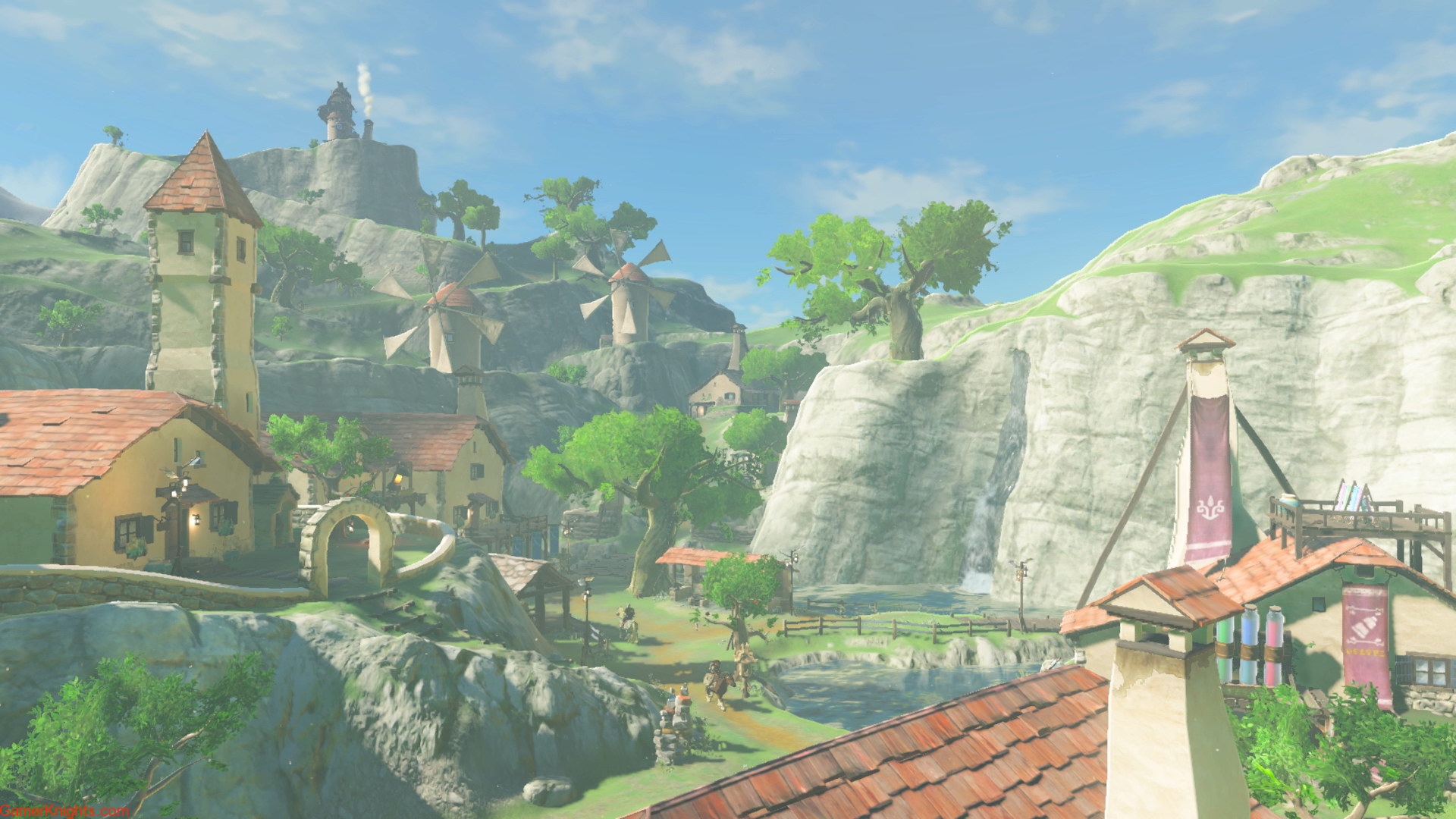 If and when you decide to hunt down the main campaign, be prepared to work for it. Apart from a couple of nudges in the right direction and vague markers on your map, you’re left to fend for yourself in Breath of the Wild. Indeed, there were moments where I wasn’t really sure what to do, so expansive is the open world and so interesting the varied distractions prove to be. Seeking out the four main tribes in the game will see you progress meaningfully, though Nintendo swear you can pick up a stick and trudge directly to the end game, if you’ve got the stones. This completely hands off approach to storytelling and game-making completely changed the way I played a Zelda game, and I honestly don’t think I could go back.

There is so much to do within Breath of the Wild’s world it seems almost impossible to start, but I’ll do so with what I see as the absolute core of the game: exploration. Whether you’re heading to distant towers to download a new region’s map data, digging around for Shrines – over one hundred of the game’s bitesize dungeons – or razing camps of Bokoblins to the ground, you’ll do so by traversing Hyrule’s daunting world. I’ve played plenty of big, open world games before, but I’m not sure any of them truly conveyed the sense of scale that Breath of the Wild manages in its opening moments, or any of the countless hours that will follow.

So it’s big, yes. How big I honestly couldn’t tell you, or how it compares to other ‘big’ games – though it feels more expansive than most I can think of – thanks to an omnipresent importance of verticality and every square inch of the place feeling hand crafted for your enjoyment. More importantly, Hyrule is smartly populated. I was concerned that, much like the Wind Waker or Skyward Sword, the Hyrule of Breath of the Wild would be a vast expanse of very little. Not so. Sure, there are plenty of stretches as you scrabble up mountains or carve your way through dense forests where nothing in particular will happen – no enemy camps, no collectibles, just you and the sporadic, haunting score. But thanks to Link’s versatility – you can scale completely vertical cliffaces with ease, as long as you have the stamnia for it – and the title’s core gameplay, even an act of traversal is fun enough. 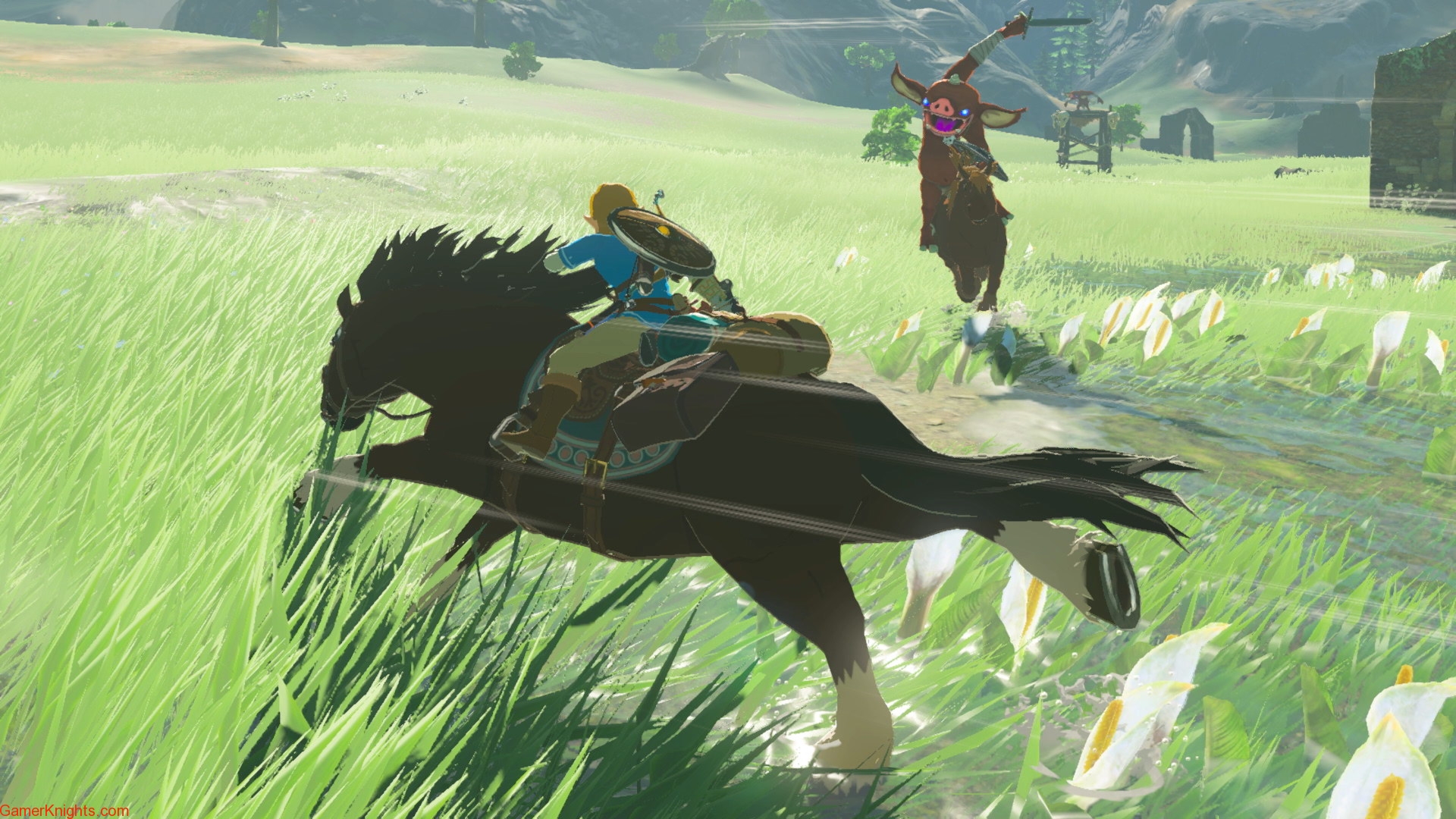 The world is peppered with plenty to find, however, and the fact that some of these places are so far out of the way or difficult to reach means that you’ll feel truly special for finding them. Upon clambering one of my first daunting mountains, for instance, I was gobsmacked to find a beautiful little valley hidden behind its sheer walls, and even more thrilled to find a massive Moblin taking a nap in the idyllic little pocket of world I’d stumbled onto. I had a great fight, grabbed some sweet loot, and pondered just how many players had seen this insular little moment of perfect gameplay. Hyrule is begging to be explored, and rewards you for doing so at every turn. I never spent a moment doing something that looked cool or challenging that the game didn’t reward me for in some way, and it’s the organic nature of these rewards and the gameplay loop being so fun that means the map doesn’t need to have a hundred markers pointing out pick-ups or places of interest.

The shrines are where Breath of the Wild challenges you in an entirely different way. Venturing across the land you’ll come across plenty of these structures, and by delving inside them you’ll be tasked with tricky little physics puzzles that Link’s new toolset is tailor made for. These miniature dungeons range anywhere between five and twenty minutes each, and they’re all wildly different and ridiculously fun. Most of them feature puzzles over combat, and these range from the simple to the mentally taxing. Link’s new bag of tricks, which includes a magnetic beam to pick up and move objects around, a stasis blast that allows you to freeze items and build up their momentum before letting loose, and the ability to raise icy platforms from any body of water. Whilst these might seem simple, the myriad combinations and applications these tools offer feel limitless. In a smart move, Nintendo have crafted their puzzles more akin to an indie studio than a triple-A developer: they are freeform physics which have multiple, organic solutions. This is most telling in how puzzles are often able to be abused or subverted into victory – indeed, I’m pretty sure I came to the finishing pedestal on a lot of these challenges by having done something completely unforeseen by the dev team, but perfectly allowed.