Physics and your new powers also come into battles. Plenty of camps of enemies are surrounded by dangerous objects you can manipulate to take out the opposition, from the simple act of rolling a bomb down a hill towards a band of bad guys and setting it off, to more complex set ups, that could include lighting surrounding foliage on fire (crafting a bad-ass fire circle to face your foes in), sending stasis-infused boulders blasting through big groups to lethal effect or even stealthily dispatching an entire group one by one, watching the others becoming more and more freaked out as their numbers dwindle. 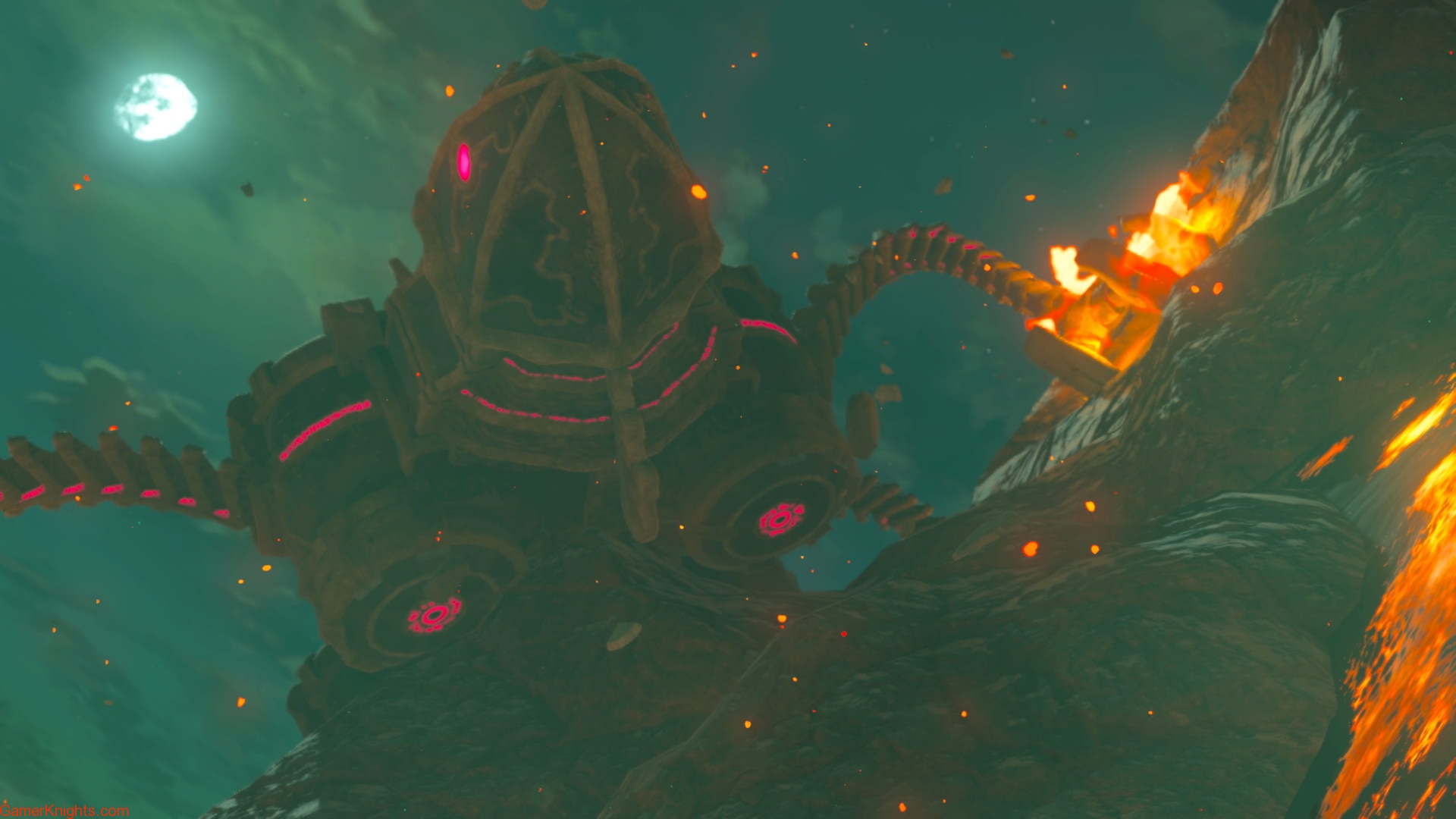 It’s a bloody hard game at times too, which is made all the more tricky by Nintendo’s refusal to bar you from any area of the map. Placing trickier enemies in certain regions is a great way of naturally nudging players in the right direction, but it’s never something a savvy player can’t overcome. I’m pretty sure I’ve broken the intended sequence of this game – if there even is an intended sequence – on multiple occasions, and have completed main dungeons out of order, thanks to a couple of memorably difficult encounters. But I adore this sense of freedom and unique pathfinding, and embrace Zelda’s newfound challenge with open arms. I haven’t been this intimidated by trash mobs since the original Zelda II on the NES, and I’m loving every second of it.

Breath of the Wild is a stunning game to behold. As you step out onto the first verdant plain of the game, it will take your breath away. Every blade of grass sways in the breeze and the world seems to breathe as it stretches out before you, thanks to a hundred little details Nintendo has brought to life. Foxes and squirrels scamper around in the underbrush, colourful characters carve out lives for themselves in the distance, bands of monsters sit around campfires cooking delicious hunks of meat whilst conversing in squawks and grunts. The world seems to continue on without you, which makes it that much more impactful when you decide to play with it and see how your presence affects it. I especially love adventuring during a thunderstorm, where you have to make sure you remove your metallic equipment so you don’t become a target for bursts of lightning.

The frame rate can dip occasionally – mostly if you decide to spin the camera in a particularly hectic action scenes – but whilst it’s definitely noticeable it doesn’t detract from the game, or its vibrant look, too much. The aesthetic of the game only takes a real hit within the shrines, which all look fantastic but identical. There’s no ‘themed’ versions or really any distinction whatsoever, just the same gun-metal grey walls with pulsing lights, which after a hundred of the things get fairly samey. It’s a shame when the rest of the game is so starkly diverse and varied, but it’s really a minor gripe with an otherwise perfect look. 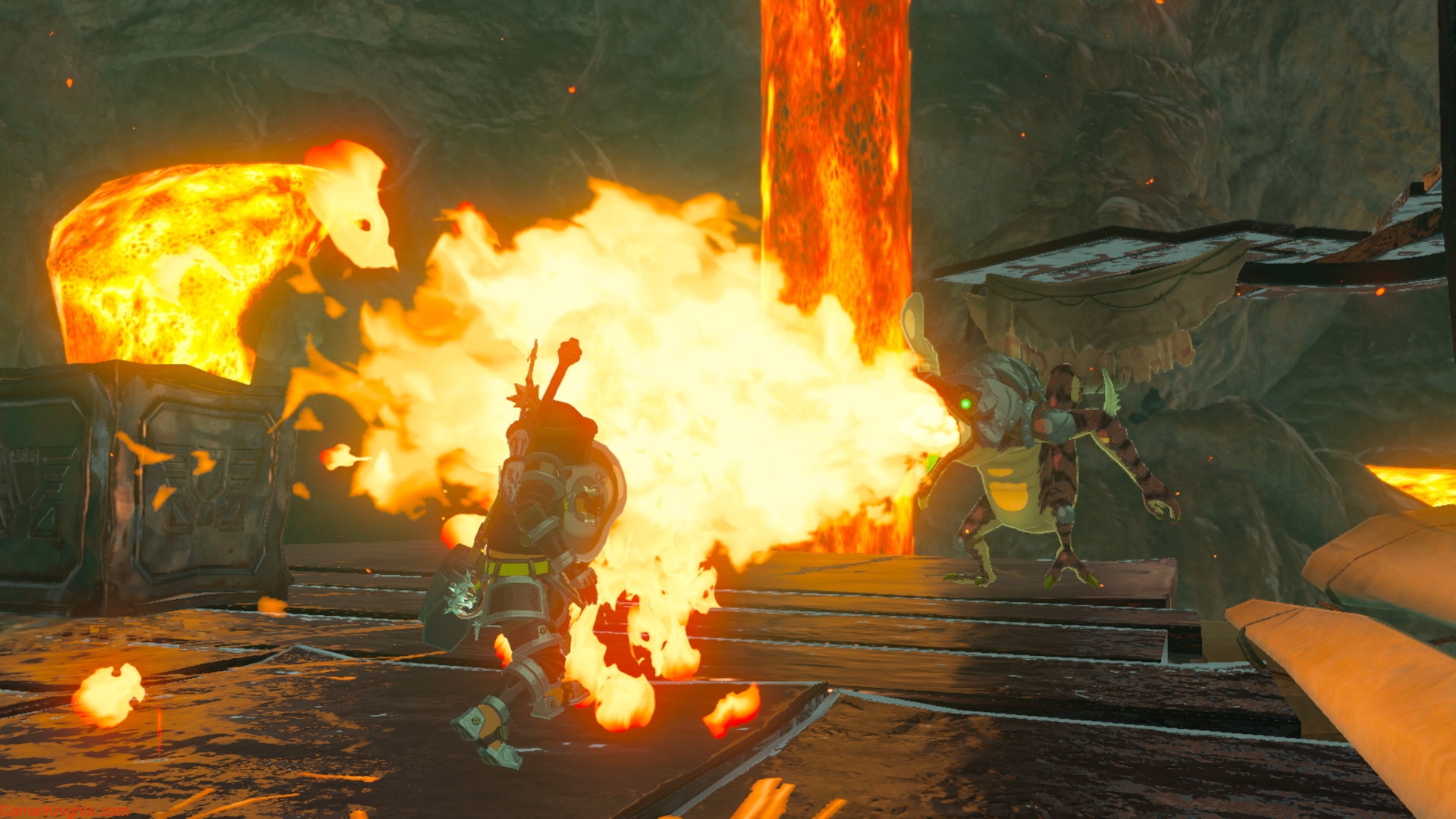 The sound design is fantastic, too. Not only is the rousing orchestral score easily the best Nintendo have ever composed for a Zelda game, it’s used so sparingly and at such perfect intervals that it becomes a living accompaniment to the adventure. When you’re out adventuring, all you can hear a lot of the time is the breeze rustling through trees, the cries of a flock of birds as they take off or other diegetic sounds, when all of a sudden a couple of errant, instantly recognizable notes will be conjured up out of the blue and accentuate the moment perfectly. It’s really something that has to be experienced to be appreciated.

Breath of the Wild is the first Zelda to really utilize full voice acting, and it’s exciting to hear characters speak to Link in full sentences (though he doesn’t respond in turn) The cast is mostly fine, but Princess Zelda herself turns in a bit of a flat performance, which I was really disappointed by. I wish Nintendo had offered a language option in the game, as I’ve heard a lot of the Japanese voice acting and instantly fell in love with it. Still, as such a small percentage of this massive game will be spent in cutscenes and, consequently, listening to voice acting, it’s easy to forget this is much of a problem.

“The Legend of Zelda: Breath of the Wild” is one of those industry-defining games that I’m sure we’ll be talking about for generations to come. I genuinely believe that the likes of Ocarina of Time and A Link to the Past have been dethroned as the best Zelda to date, and I’m so smitten with the countless hours I’ve spent in this new Hyrule – and desperate to get back to countless more – that it’d be hard to argue that this game hasn’t become one of my all time favourites already.

I can’t remember the last game that offered such pure, uncomprimising joy on a minute to minute basis as this one, and honestly I’m intimidated to going back to play other similar games. I can’t see how they can possibly compare.

The Legend of Zelda: Breath Of The Wild – The Master Trials DLC Review
17th July 2017